September 29, 2011 at 6:05 PM ET by Darienne Page
Twitter Facebook Email
Summary:
The new multi-year partnership will allow both organizations to strengthen services and support offered to our nation’s wounded and their caregivers 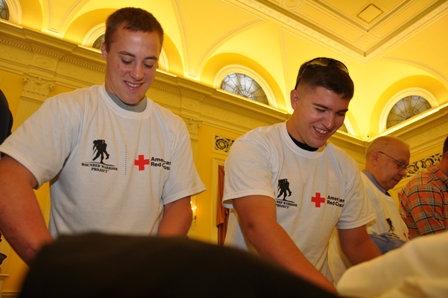 Volunteers putting together Transitional Care Packages, containing clothing, toiletries and other essential care and comfort items for newly injured warriors, at the National Headquarters of the American Red Cross. September 27, 2011.

This week, Wounded Warrior Project™ (WWP),and the American Red Cross announced that they are joining forces in a new multi-year partnership that will allow both organizations to strengthen services and support offered to our nation’s wounded and their caregivers. On Tuesday, both organizations met at the National Headquarters of the American Red Cross to kick off the partnership and to assemble 500 Transitional Care Packs.

“Alone each organization makes a difference within the military community, but together we magnify our impact to those men and women who have sacrificed so much for our country” said Sherri Brown, SVP, Service to the Armed Forces, American Red Cross.

WWP and the Red Cross are collaborating on Wounded Warrior Project’s longstanding Transitional Care Pack program. The packs contain clothing, toiletries, and other essential care and comfort items newly injured warriors are often without. The pack provides immediate comfort when a warrior is evacuated from the battlefield to a field hospital. Traditionally sent to Landstuhl Regional Medical Center in Germany, the new partnership with the Red Cross will expand the scope of delivery to Ramstein Air Force Base, Germany; Camp Arifjan, Kuwait; Djibouti, Afghanistan and other military medical facilities that are providing medical treatment and supporting wounded warriors.

“The American Red Cross has long believed as we do that it is important to support wounded veterans and their families in all facets of their recovery. With a shared mission to support these heroes, a collaborative partnership made sense on so many levels. We are honored to be working with a group that has done so much good for so many.” said Wounded Warrior Project Executive Director Steve Nardizzi. 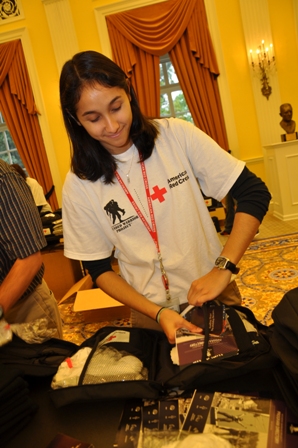 This new collaboration is a perfect example of organizations stepping up and working together to support our Nation’s wounded service members and their families as highlighted by the Joining Forces initiative launched by the First Lady and Dr. Biden. Their partnership ensures the continuation and enhancement of other existing WWP and Red Cross programs, which provide unique and innovative support to wounded warriors during the rehabilitation process.

Wellness and resiliency are also a critical piece of the new partnership. The organizations will work to develop and manage several adaptive sporting programs and therapies including but not limited to warrior games and wheelchair sports. Both WWP and the Red Cross share the belief that it is critical to support staff and military personnel who are instrumental in the survival and recovery of the wounded. The two groups will plan and organize respite days for spouses and family members who are providing care for a wounded service member or veteran.

In joining forces, both organizations will together serve those who have sacrificed so much. 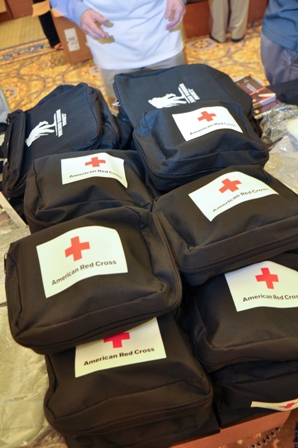 Newly-assembled Transitional Care Packages at the National Headquarters of the American Red Cross, ready to help our Wounded Warriors September 27, 2011.