October 2, 2011 at 10:24 AM ET by Kasie Coccaro
Twitter Facebook Email
Summary:
President Obama addressed the 15th Annual Human Rights Campaign National Dinner. In his speech, the President stressed his commitment to the cause of equality over the past two and a half years, and his continuing support moving forward. 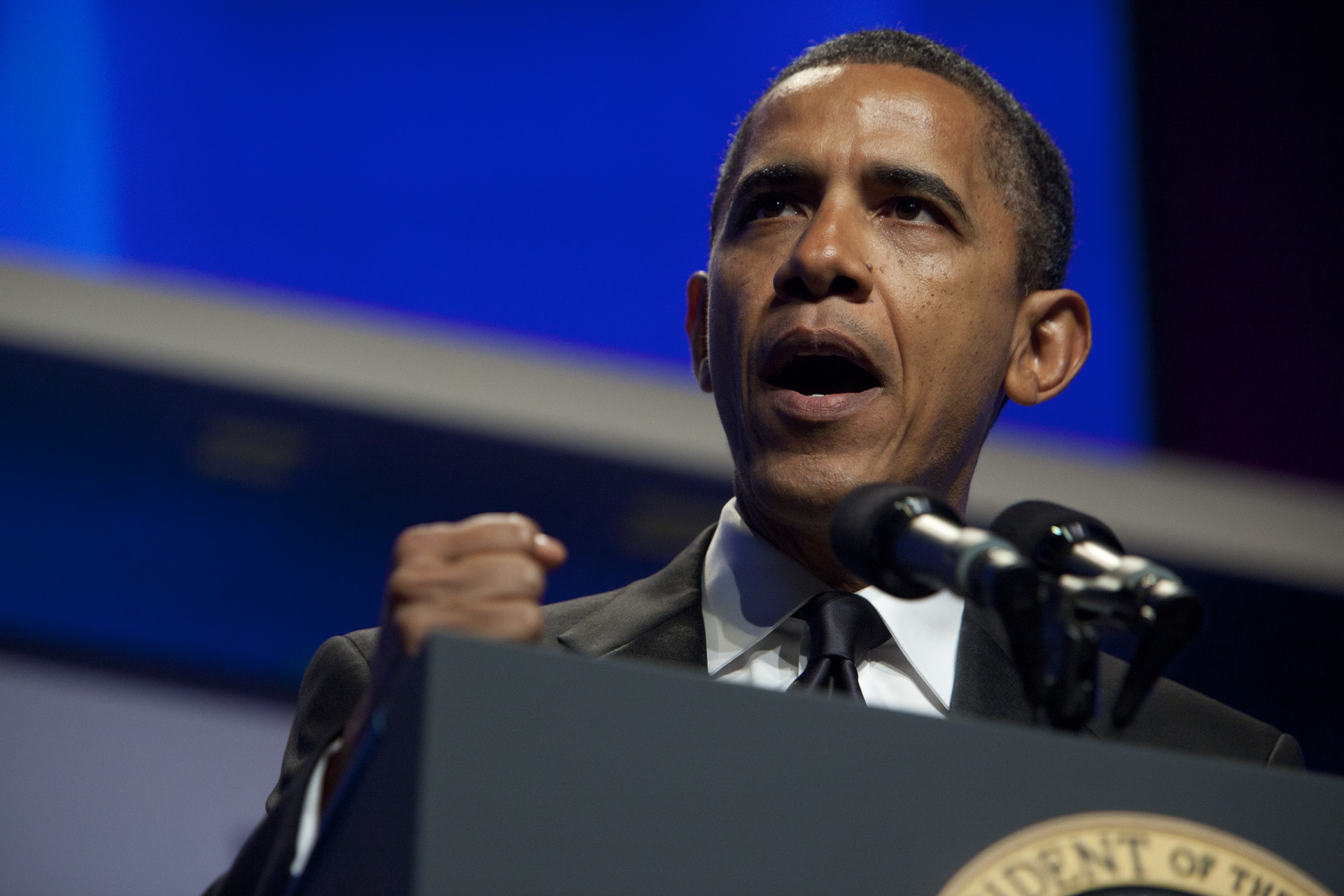 Yesterday, President Obama addressed the 15th Annual Human Rights Campaign National Dinner at the Washington Convention Center in Washington, DC.  In his speech, the President stressed his commitment to the cause of equality over the past two and a half years, and his continuing support moving forward.

Now, I don’t have to tell you that we have a ways to go in that struggle.  I don’t have to tell you how many are still denied their basic rights -- Americans who are still made to feel like second-class citizens, who have to live a lie to keep their jobs, or who are afraid to walk the street, or down the hall at school.  Many of you have devoted your lives to the cause of equality.  So you know what we have to do; we’ve got more work ahead of us.

But we can also be proud of the progress we’ve made these past two and a half years.  Think about it. Two years ago, I stood at this podium, in this room, before many of you, and I made a pledge.  I said I would never counsel patience; that it wasn’t right to tell you to be patient any more than it was right for others to tell African Americans to be patient in the fight for equal rights a half century ago. But what I also said, that while it might take time –- more time than anyone would like -– we are going to make progress; we are going to succeed; we are going to build a more perfect union

And so, let’s see what happened.  I met with Judy Shepard. I promised her we would pass a hate crimes bill named for her son, Matthew.  And with the help of my dear friend Ted Kennedy we got it done.  Because it should never be dangerous -- you should never have to look over your shoulder -- to be gay in the United States of America.  That’s why we got it done.

I met with Janice Langbehn, who was barred from the bedside of the woman she loved as she lay dying.  And I told her that we were going to put a stop to this discrimination.  And you know what?  We got it done.  I issued an order so that any hospital in America that accepts Medicare or Medicaid -– and that means just about every hospital -– has to treat gay partners just as they do straight partners.  Because nobody should have to produce a legal contract to hold the hand of the person that they love.  We got that done.

I said that we would lift that HIV travel ban -- we got that done. We put in place the first comprehensive national strategy to fight HIV/AIDS.

Many questioned whether we’d succeed in repealing “don’t ask, don’t tell.”  And, yes, it took two years to get the repeal through Congress. We had to hold a coalition together.  We had to keep up the pressure.  We took some flak along the way. But with the help of HRC, we got it done.  And “don’t ask, don’t tell” is history. And all over the world, there are men and women serving this country just as they always have -- with honor and courage and discipline and valor.  We got it done. We got that done.  All around the world, you’ve got gays and lesbians who are serving, and the only difference is now they can put up a family photo. No one has to live a lie to serve the country they love.

Moving forward, President Obama vowed to keep fighting for equality and asked for help passing a repeal of the Defense of Marriage Act,  as well as the passage of an inclusive employment non-discrimination bill.

I vowed to keep up the fight against the so-called Defense of Marriage Act.  There’s a bill to repeal this discriminatory law in Congress, and I want to see that passed.  But until we reach that day, my administration is no longer defending DOMA in the courts.  I believe the law runs counter to the Constitution, and it’s time for it to end once and for all.  It should join “don’t ask, don’t tell” in the history books.

So, yes, we have more work to do.  And after so many years -- even decades -- of inaction you’ve got every right to push against the slow pace of change.  But make no mistake -- I want people to feel encouraged here -- we are making change.  We’re making real and lasting change.  We can be proud of the progress we’ve already made.

And I’m going to continue to fight alongside you.  And I don’t just mean in your role, by the way, as advocates for equality.  You’re also moms and dads who care about the schools your children go to. You’re also students figuring out how to pay for college.  You’re also folks who are worried about the economy and whether or not your partner or husband or wife will be able to find a job.  And you’re Americans who want this country to succeed and prosper, and who are tired of the gridlock and the vicious partisanship, and are sick of the Washington games.  Those are your fights, too, HRC.

So I’m going to need your help.  I need your help to fight for equality, to pass a repeal of DOMA, to pass an inclusive employment non-discrimination bill so that being gay is never again a fireable offense in America. And I don’t have to tell you, there are those who don't want to just stand in our way but want to turn the clock back; who want to return to the days when gay people couldn’t serve their country openly; who reject the progress that we’ve made; who, as we speak, are looking to enshrine discrimination into state laws and constitutions -- efforts that we’ve got to work hard to oppose, because that’s not what America should be about.

And together, we also have to keep sending a message to every young person in this country who might feel alone or afraid because they’re gay or transgender -- who may be getting picked on or pushed around because they’re different.  We’ve got to make sure they know that there are adults they can talk to; that they are never alone; that there is a whole world waiting for them filled with possibility.  That’s why we held a summit at the White House on bullying.  That’s why we’re going to continue to focus on this issue. This isn’t just “kids being kids.”  It’s wrong.  It’s destructive.  It’s never acceptable.  And I want all those kids to know that the President and the First Lady is standing right by them every inch of the way. I want them to know that we love them and care about them, and they’re not by themselves.  That’s what I want them to know.

I need your help to fight for equality, to pass a repeal of DOMA, to pass an inclusive employment non-discrimination bill so that being gay is never again a fireable offense in America.

Finally, the President expressed his hope for a more tolerant, just, equal America and a more inexorable march towards a more perfect union.

We don’t believe in a small America.  We believe in a big America -- a tolerant America, a just America, an equal America -- that values the service of every patriot. We believe in an America where we’re all in it together, and we see the good in one another, and we live up to a creed that is as old as our founding:  E pluribus unum.  Out of many, one.  And that includes everybody.  That’s what we believe.  That’s what we’re going to be fighting for.

I am confident that’s what the American people believe in. I’m confident because of the changes we’ve achieved these past two and a half years -– the progress that some folks said was impossible.

I am still hopeful, because of a deeper shift that we’re seeing; a transformation not only written into our laws, but woven into the fabric of our society.

It’s progress led not by Washington but by ordinary citizens, who are propelled not just by politics but by love and friendship and a sense of mutual regard. It’s playing out in legislatures like New York, and courtrooms and in the ballot box.  But it’s also happening around water coolers and at the Thanksgiving table, and on Facebook and Twitter, and at PTA meetings and potluck dinners, and church socials and VFW Halls.

It happens when a father realizes he doesn’t just love his daughter, but also her wife. It happens when a soldier tells his unit that he’s gay, and they tell him they knew it all along and they didn’t care, because he was the toughest guy in the unit. It happens when a video sparks a movement to let every single young person know they’re not alone, and things will get better.  It happens when people look past their ultimately minor differences to see themselves in the hopes and struggles of their fellow human beings.  That’s where change is happening.

And that’s not just the story of the gay rights movement.  That’s the story of America -- the slow, inexorable march towards a more perfect union. You are contributing to that story, and I’m confident we can continue to write another chapter together.

Thank you very much, everybody.  God bless you.