An Energy Efficiency Leader at the Department of the Navy

Editor's Note: This blog introduces readers to Kateri Callahan, president of the Alliance to Save Energy, a DC-based nonprofit promoting energy efficiency.

Since assuming her post as the Navy's chief official on energy matters in March 2010, Assistant Secretary of the Navy (Energy, Installations and Environment) Jackalyne Pfannenstiel has been managing over 75,000 buildings and facilities that support Navy and Marine operations around the world. Her sharp focus on energy efficiency has far-reaching impacts within and beyond the military, and it's why she has been selected as the 2011 recipient of the Alliance to Save Energy's Chairman's Award. 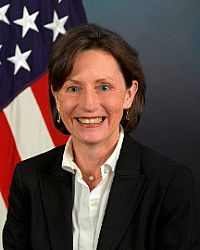 The Honorable Jackalyne Pfannenstiel, Assistant Secretary of the Navy (Energy, Installations and Environment)

Pfannenstiel believes the Navy must be innovative in the way it uses energy in global missions. When President Obama issued his Executive Order 13514 in 2009 directing Federal agencies to lead in energy, environmental, and economic performance, he lead the way for exactly this type of innovation. At the Alliance, we encourage all government agencies to follow Pfannenstiel’s example by embracing energy efficiency initiatives to demonstrate the remarkable potential of energy efficiency in replicable, achievable ways.

Our Honorary Chair, Senator Jeanne Shaheen, selected Pfannenstiel for her career-long efforts to drive energy efficiency through her creativity, commitment and innovation. She has worked in both the public and private sectors to save energy for consumers, businesses and governments alike. In this position she now has the opportunity to have an even greater impact, saving the Federal Government and taxpayers money that can be used for other important needs while keeping our country safe.

As with its Great White Fleet of 1907, the U.S. Navy is again leading the way as a military power, this time with its "Great Green Fleet" that heavily emphasizes energy efficiency as a first step toward energy independence. With the "Great Green Fleet," the Navy has pledged to:

In addition, Pfannenstiel hopes military research and development will drive energy efficiency technology, in the same way that it embraced now-common public technologies like the Internet and GPS.

Assistant Secretary Pfannenstiel has amply demonstrated her commitment to energy efficiency, and we look forward to honoring her and other remarkable energy efficiency champions at our Awards dinner this evening.

Kateri Callahan is President of the Alliance to Save Energy