Three years ago Chris Oliver was unemployed and facing homelessness after being evicted from his Dallas apartment.  He turned to City Square, a local nonprofit that provides vital services to neighbors struggling with poverty.  City Square didn’t just help Chris put food on the table – it gave him a second chance on life.   He joined City Square’s AmeriCorps program, where he served for two years.  Now Chris has a full-time position working in the organization’s homeless outreach program. 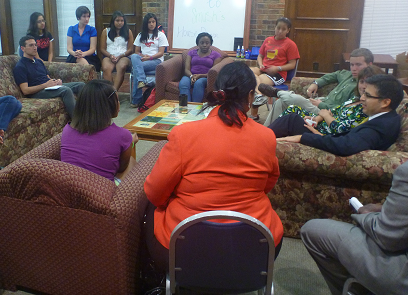 On September 29th and 30th, I had the chance to meet Chris and dozens of other Dallas residents who are using national service to make a difference in their communities and their own lives.   More than 3,000 AmeriCorps members and Senior Corps volunteers serve in Dallas alone.  These dedicated citizens tutor and mentor at-risk youth, build affordable housing, assist veterans and military families, care for seniors, run after-school programs, and recruit and manage volunteers.

I also met Richard Hotinski, an RSVP volunteer with the Senior Source.  Richard served in the United States Air Force for 23 years, then had a second career as an auditor.   After his mother became terminally ill, he assumed full care of her, including tracking her Medicare statements.  As a caregiver and an auditor, he became aware of the increased incidence of Medicare fraud.  He signed up with RSVP to volunteer on the Senior Medicare Patrol.   Richard makes presentations about Medicare fraud and reviews statements for billing errors and possible fraud – helping vulnerable seniors and saving taxpayer dollars.

In tough economic times, citizens like Chris and Richard are using their time and talents to meet community needs.   As a Dallas native, I was proud to see such a strong spirit of service among the people I met – from students at Southern Methodist University, to members of the National Guard bureau, to innovative leaders of the Dallas foundation and nonprofit sector.  Our Volunteering in America report this out -- each year, more than 1.4 million Dallas residents volunteer, giving 172 million hours of service worth more than $3.7 billion.

Given the many social needs facing our communities – and the growing interest in service by Americans of all ages – this is a critical moment for the voluntary sector.  The Obama Administration is deeply committed to expanding the role of service in solving community problems.  It is our belief that service isn’t secondary or separate from achieving our priorities; it’s essential to achieving them.

The Corporation for National and Community Service is powering community solutions in Dallas and across America. National service solves problems, prepares future leaders, strengthens communities and gives those who serve a chance to transform their own lives.  See how you can get involved by visiting Serve.gov.

Robert Velasco, II, is acting Chief Executive Officer of the Corporation for National and Community Service