October 17, 2011 at 12:00 AM ET by Matt Compton
Twitter Facebook Email
Summary:
For three days, President Obama will tour cities in both North Carolina and Virginia -- visiting schools, an airport, a military base, and a fire station 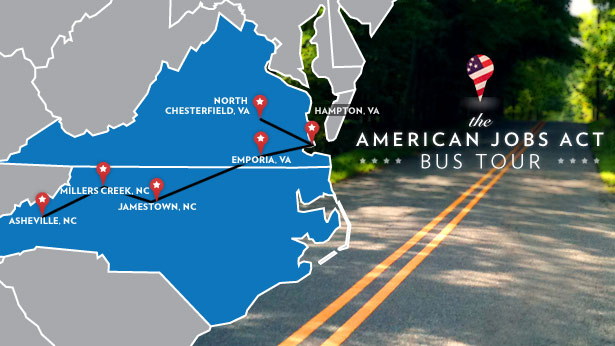 For three days, he'll tour cities in both North Carolina and Virginia -- visiting schools, an airport, a military base, and a fire station. He'll be talking about his plan to put Americans back to work, upgrade our country's infrastructure, and keep teachers and emergency responders on the job.

Last week, Senate Republicans voted to block the President's proposal, playing politics instead of working to grow our economy.

But this fight to create jobs and rebuild our nation's roads and bridges is far from over. On Wednesday, President Obama said:

This bus tour puts a face on the teachers, firefighters, and police officers whose livelihoods are threatened by inaction.

The trip began this morning in Asheville, North Carolina and wraps up Wednesday in North Chesterfield, Virginia.

The first event was this morning at Asheville Regional Airport, where the President spoke about the need to upgrade the nation's infrastructure.

At 5:00 ET this afternoon, the President will speak from West Wilkes High School in Miller's Creek, North Carolina. You can watch those remarks live at whitehouse.gov/live.

You'll also be able to watch the President speak tomorrow from Guilford Technical Community College in Jamestown, North Carolina using the same link. On Wednesday, we'll also stream video of President Obama as he speaks at Joint Base Langley-Eustis in Hampton, Virginia and a firehouse in North Chesterfield, Virginia.