October 17, 2011 at 8:08 PM ET by Nikki Sutton
Twitter Facebook Email
Summary:
As part of the Joining Forces initiative, First Lady Michelle Obama and Dr. Jill Biden join Sears Holdings Corporation and the Rebuilding Together nonprofit organization in putting the final touches on the 1,000th home that they have rebuilt for veterans. 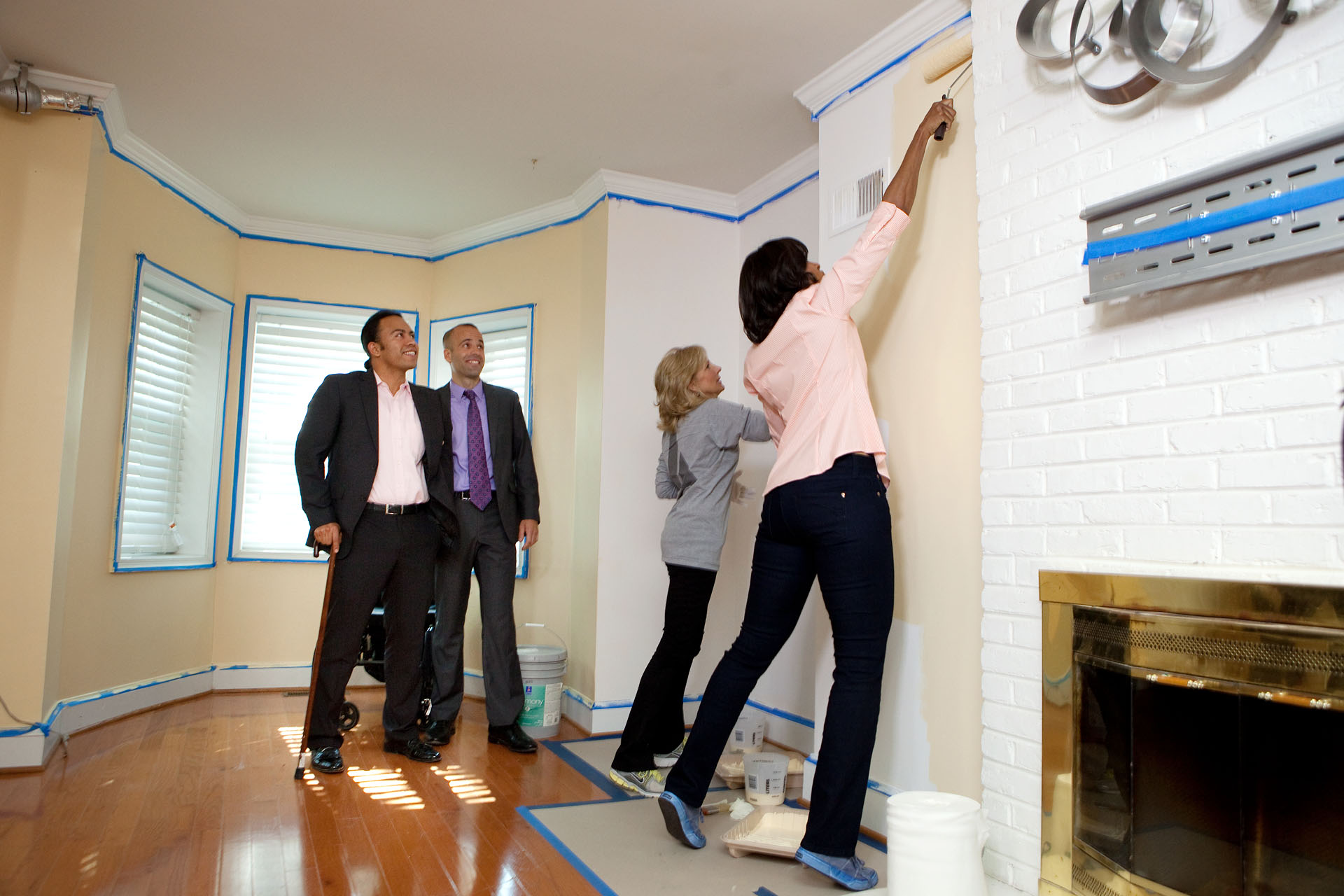 First Lady Michelle Obama and Dr. Jill Biden paint a wall in the home of Sgt. Johnny Agbi, Jr., left, at the Joining Forces Initiative Heroes at Home event in Washington, D.C., Oct. 17, 2011. The retrofit on Sgt. Agbi's home to make it wheelchair accessible was the 1,000th home rebuilt by the Rebuilding Together and Sears Heroes at Home programs. (Official White House Photo by Chuck Kennedy)

First Lady Michelle Obama and Dr. Jill Biden joined forces with Sears Holding's Heroes at Home program and the Rebuilding Together nonprofit organization today to put the final touches on the 1,000th home that they have rebuilt for veterans since 2007.

The home belongs to Army Sergent Johnny Agbi who served in the Army’s 10th Mountain Division and deployed to Iraq and Afghanistan. While serving as an Army medic in Afghanistan, his helicopter transport was shot down and he suffered injuries that have required him to use a wheelchair and join a comprehensive rehabilitation program. Along with fifty volunteers, the First Lady, Dr. Biden, Sears and Rebuilding Together completed a retrofit of Army Sergent Johnny Agbi’s home to make it wheelchair accessible.

The Joining Forces initiative is all about honoring and supporting America’s service members and their families, and the work of the Heroes at Home program and Rebuilding Together is an amazing example of how companies, organizations and individuals can help. They work to improve the lives of American military families by making necessary repairs, improvements or modifications to the homes of veterans and wounded warriors.

Sergeant Agbi, I know I speak for everyone here today when I say, you are a true hero.  You and all of your fellow veterans and service members from across the country show us every day what words like "strength" and "courage" mean.  And, of course, we're also grateful to your family members for their service to our country.

Projects like today's build represent some of the incredible ways that communities are coming together to support our veterans and military families all across the United States.  And these projects, and all the partners and volunteers who make them possible, embody the spirit of the Joining Forces Initiative that the First Lady and I launched earlier this year. 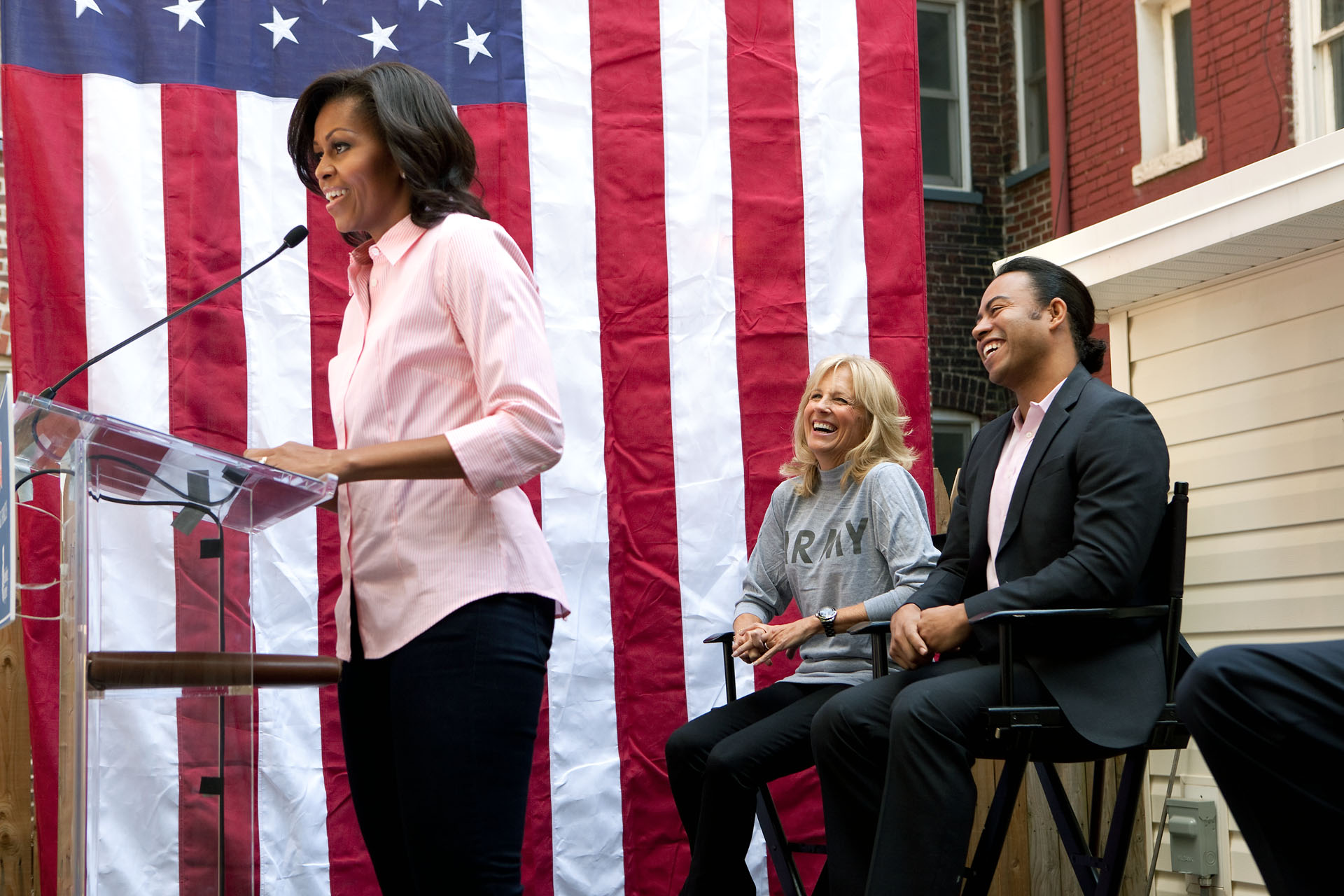 First Lady Michelle Obama also had a message for everyone who joined forces to make the day possible:

One of our goals with Joining Forces is really to use what we have to shine a light not only on the incredible service of America’s military families who give our nation so much, but also on those Americans -- like all of you -- who are stepping up in so many important ways to give something back to these men and women and their families.

And that’s exactly what’s happening here today with these two wonderful announcements.  First, we’re marking the 1,000th home that Sears and Rebuilding Together have refitted for our wounded warriors through the Heroes at Home Project.  And that is a very impressive accomplishment and you all should be just so proud -- 1,000 homes.

And on top of that, Sears Holdings is pledging to increase the number of military family members in its workforce by 10 percent.  I mean, that’s incredible.  That's exactly what we're hoping to see happen.  It means that more than 30,000 troops, veterans, and military spouses will be working at Sears.  And it’s only the latest commitment that the Sears team has made.  They have been working with us at Joining Forces since the very beginning.  And we look forward to working with them even more, but more importantly, for them to serve as an example of how America’s businesses can look out for our heroes, particularly during these tough economic times.

And all of this is just amazing.  It represents the best that our country has to offer.  And just think about what those kind of numbers actually mean.  Just think about the lives that are changed.  Think about the renewed sense of security that each family feels because mom or dad just got hired; how the wounded warrior whose life is transformed by a refurbished home.  Just think about what that new front door, that broader, wider front door means -- it's no longer an obstacle; the stairway that is no longer an adversary; the building that’s no longer just a house, but it's now become a home.