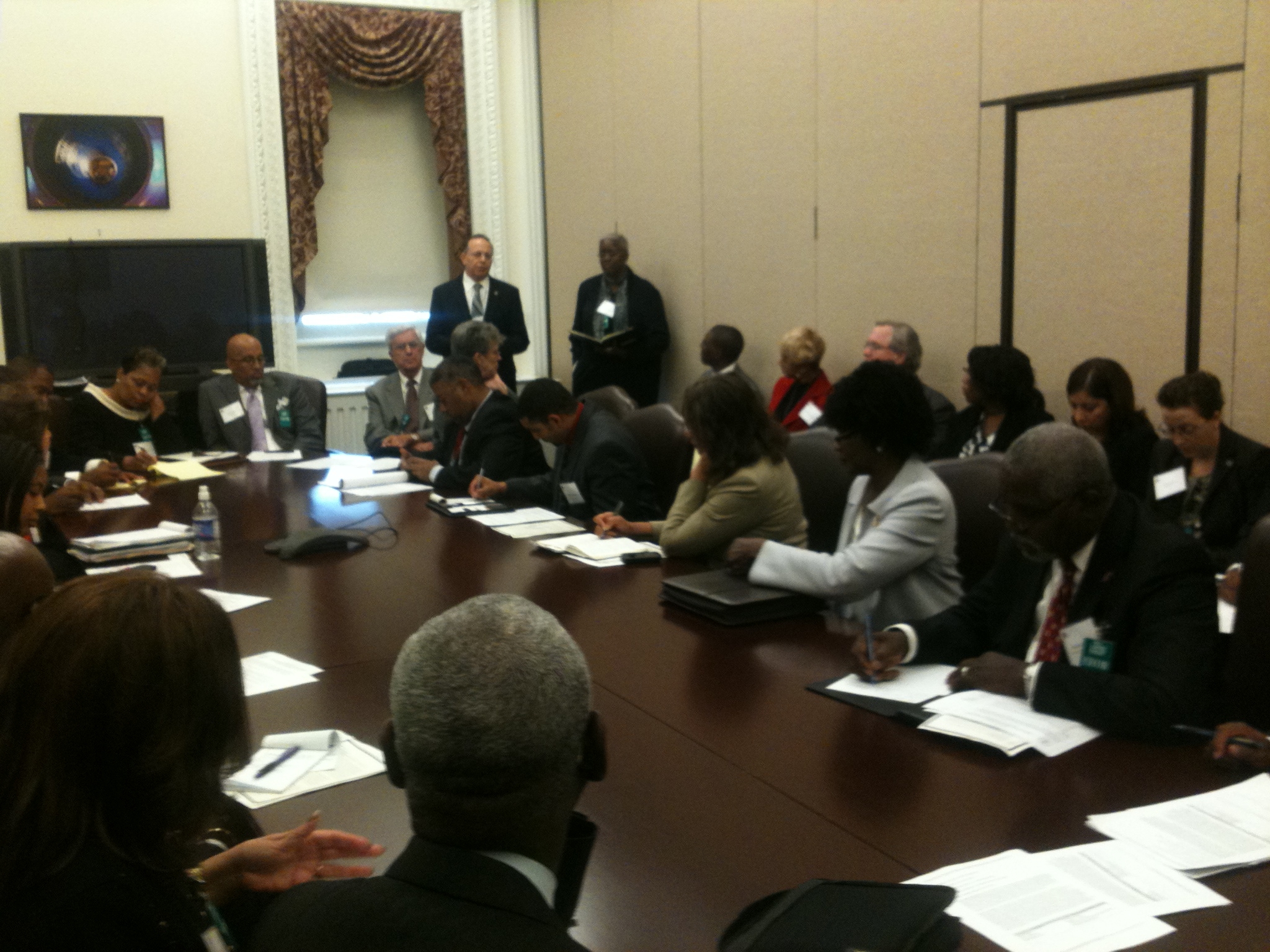 Faith and Community leaders gathered to participate in a breakout session offered by the Department of Labor in the White House Symposium on Economic Recovery and Job Creation.

Faith and community leaders from across the country joined the White House, the U.S. Small Business Administration (SBA), Department of Commerce, Department of Labor, US Department of Agriculture, the Treasury Department, and nonprofit peers on September 22nd for a symposium on strengthening the role of faith-based and neighborhood partnerships in economic development and job creation.  Joshua DuBois, Executive Director of the Office of Faith-based and Neighborhood Partnerships, welcomed participants and introduced our facilitator for the day, SBA Deputy Administrator Marie Johns. Joshua, Marie, and other federal officials focused our attention on innovative resources available for job creation and economic development, as well as highlighted best practices of faith-based and non-profit organizations.

Among the day’s highlights was the panel on successful faith-based and community initiatives to foster economic development in underserved communities. Wendy Bauman explained that her organization, Wisconsin Women’s Business Initiative, received one of the first SBA microloans, which she used to launch a women’s microloan program currently managing a $3.2 million portfolio. Mercy Partnership Fund, another of the showcased microlenders, receives its capital from Sisters of Mercy who voluntarily invest their retirement funds. Despite serving the poorest of the poor, who often lack collateral, Sister Corrine Florek emphasized that her organization’s portfolio “hasn’t lost a cent” since the economic downturn!

Also on the panel were several leaders who create jobs more directly. At Homeboy Industries, Fr. Greg Boyle believes “everybody’s a whole lot more than the worst thing they ever did,” which led him to launch an organization now employing 300 gang members whose felony convictions turn many potential employers away. Rev. Dr. Robert V. Lee III also works in a high-crime inner city, where his Fresh Ministries incubates Jacksonville, FL, businesses which have generated 1602 new local jobs in the last eight years.

Rounding out the leaders on this panel, Theda McPheron-Keel described the range of economic development activities through which Wind Hollow Foundation serves Native Americans. Wind Hollow specializes in supporting Native grant applicants responding to transition on their reservations while preserving their traditions.

Following several panels, participants attended breakout sessions hosted by the Centers for Faith-based and Neighborhood Partnerships found in each of our agency co-sponsors of the symposium. A session on training and micro-financing for small businesses, co-hosted by SBA and USDA, covered SBA programs with a particular focus on free counseling and training resources and the SBA Microloan Intermediary Program. Participants also learned how USDA programs can play a critical role in promoting economic development, creating jobs, and improving quality of life in Rural America. The Departments of Commerce and the Treasury co-hosted another session focusing on ways in which faith-based and community organizations can partner with the federal government to assist entrepreneurs, job seekers, workers and communities in low income areas. Topics in this session included financial and technical assistance access to capital and lending economic recovery and successful economic development growth models. Third, our faith-based center at the Department of Labor facilitated a session on workforce support initiatives. Labor staff and participants covered jobs clubs and other relevant issues including employment services for disadvantaged populations with multiple employment barriers, such as ex-offenders, immigrants, and at-risk youth.

Michael Strautmanis, Deputy Assistant to the President, closed the event by tying our discussions to the Administration’s overall push for job creation. “I want you to put us to the test,” he told these nonprofit leaders, in an effort to foster a closer partnership for our shared goal of economic recovery.