Muslim Communities Serve Neighbors Across Country in a Day of Dignity

October 19, 2011 at 1:40 PM ET by Heidi Christensen
Twitter Facebook Email
Summary:
Heidi Christensen reflects on her recent visit to the "Day of Dignity" event sponsored by Islamic Relief USA where volunteers served over 20,000 homeless Americans and people in need. 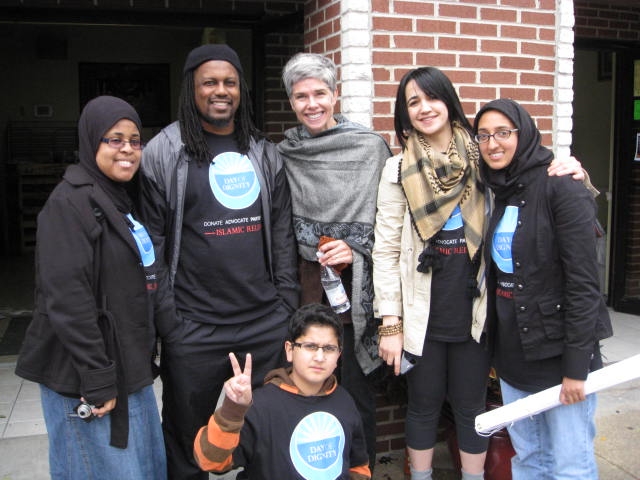 Islamic Relief staff and volunteers gather after a day of service in Baltimore October 1, 2011.

This past Saturday, October 1, staff from the HHS Center for Faith-Based and Neighborhood Partnerships (The Partnership Center) joined with American Muslims and community volunteers at Day of Dignity events in Baltimore, MD and Philadelphia, PA. Held simultaneously in 15 cities across the country, Day of Dignity was sponsored by Islamic Relief USA and served over 20,000 homeless Americans and people in need.

On Saturday’s frosty early fall morning in West Baltimore, volunteers from the Masjid Ul Haqqand the Muslim Social Services Agency, led by Imam Hassan Amin and his son Karim, spread out into the community to invite people from homeless shelters, parks and the streets along historic Pennsylvania Avenue—an area where it is estimated that 38 percent of residents live below the poverty line. Over the day, more than 900 men, women and many children received a warm meal, fresh clothing, hygiene kits, blankets, books and toys.

Many participants found sustaining support in the healthcare offerings coordinated by the HHS Partnership Center, which has taken up the President’s charge to actively engage faith communities in reducing health disparities. With the assistance of the National Alliance for States and Territorial Aids Directors (NASTAD), rapid screen testing for HIV/AIDS was offered at over 10 of the Day of Dignity events. In Baltimore, many chose to be tested for both HIV/AIDS and communicable diseases by a team manning a STAR Mobile Unit- a faith-based.

In addition, representatives from the Centers for Medicare and Medicaid Services and Baltimore Healthcare Access answered a steady stream of questions about healthcare eligibility, open enrollment, the flu campaign, and preventive services, Medicaid, MCHIP, Medicare.gov and PCIP. In a few cases, applicants filled out the necessary paper work to start their enrollment in the Maryland PAC program.

In downtown Philadelphia, Acacia Bamberg Salatti – Deputy Director of the HHS Partnership Center – spoke to the Day of Dignity organizers and volunteers. She said, “In the Muslim faith tradition, there’s a saying: ‘Not one of you is a believer until he loves for his brother what he loves for himself.’ Today here in the city of Brotherly Love, we celebrate the 5th Annual Day of Dignity, demonstrating and affirming to the community the inherent dignity and worth of all our brothers and sisters.” She also pointed out that the majority of volunteers were young adults, which only underscored their tremendous service to local individuals and families.

As the afternoon grew late in chilly Baltimore, I joined Karim and another volunteer to take goods and hot meals to folks at downtown city parks. In a U-Haul, we pulled up alongside curbs as men and women huddled around the hastily laid tables of warm chicken, soda and water. It was an honor to join Karim and his community, as well as public and civil institutions that arecommitted to their neighbors and to the dignity of each human being.

Heidi Christensen is the Associate Director for Community Engagement at the HHS Partnership Center.