October 20, 2011 at 10:12 AM ET by Daren Briscoe
Twitter Facebook Email
Summary:
On the island of Puerto Rico, home to the third-largest school district in the United States, Secretary Duncan on Monday brings a tough, but optimistic message to the “Investing in Our Future” Education Summit.

On the island of Puerto Rico, home to the third-largest school district in the United States, Secretary Duncan on Monday brought a tough, but optimistic message to the “Investing in Our Future” Education Summit.

Puerto Rico, Duncan said to the more than 300 attendees, must choose “the path of embracing innovation, academic rigor, accountability, and effective strategies for accelerating learning for all students.”

In the first official visit by a U.S. Secretary of Education to Puerto Rico in 18 years, Secretary Duncan delivered opening and closing remarks at the 7-hour summit. 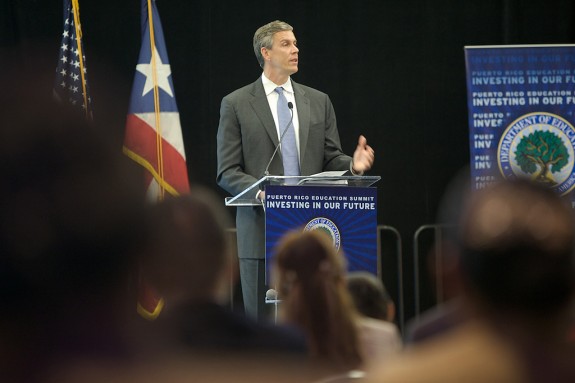 Student achievement has floundered in Puerto Rico, and 63 schools have been identified as persistently low-achieving.

Duncan acknowledged the challenges, but pressed summit attendees to meet those challenges, including poverty, with a spirit of collaboration and optimism.

“I know that poverty is not destiny,” Duncan said.  “We have all seen lives change because of opportunity, support, and guidance from great teachers and mentors.”

The summit’s panel on labor-management collaboration was the subject of particular attention, and Dr. Linda Lane, Pittsburgh Public Schools Superintendent, and Nina Esposito-Visgitis, President of the Pittsburgh Federation of Teachers, shared with the audience how they forged a strong working relationship.

“It all began when they asked me to participate in a teacher evaluation discussion, and I realized they were listening to me,” Vigisitis said.  “That really is where things began.”

The Department of Education, along with the Task Force, will continue to follow-up on the recommendations and lessons learned from the Summit.

Daren Briscoe is the Deputy Press Secretary at the Department of Education.