Welcoming the Winners of the 2010 National Medals of Science, Technology and Innovation to the White House

October 21, 2011 at 8:10 PM ET by Colleen Curtis
Twitter Facebook Email
Summary:
President Obama bestowed the nation's highest honor in the fields of inventing and innovation on 12 men and women whose work impacts all of our lives 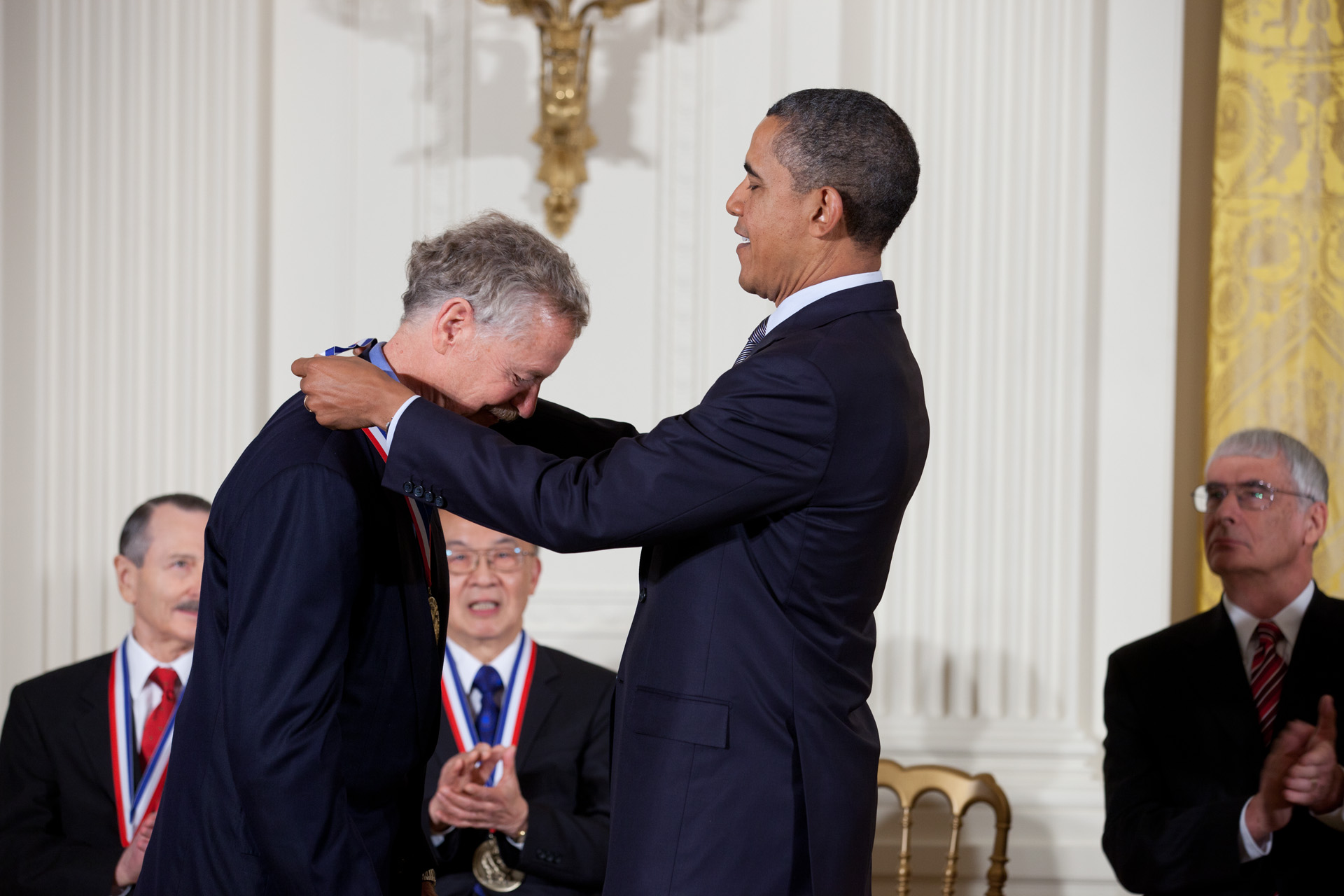 President Obama today welcomed some of our nation's most outstanding innovators and inventors to the White House. They were all winners of the National Medals of Science and the National Medals of Technology and Innovation, our nation’s highest honor for inventions and innovation. The President praised the 2010 honorees work, and their influence as role models to the next generation of budding scientists:

Thanks to the men and women on the stage, we are one step closer to curing diseases like cancer and Parkinson’s.  Because of their work, soldiers can see the enemy at night and grandparents can see the pictures of their grandchildren instantly and constantly.  Planes are safer, satellites are cheaper, and our energy grid is more efficient, thanks to the breakthroughs that they have made.

And even though these folks have not sought out the kind of celebrity that lands you on the cover of People magazine, the truth is that today’s honorees have made a bigger difference in our lives than most of us will ever realize. When we fill up our cars, talk on our cell phones, or take a lifesaving drug, we don’t always think about the ideas and the effort that made it all possible.  We don’t always ask ourselves how many sleepless nights went by and how many family dinners were sacrificed. But the folks behind me -- they know.  They worked those long nights. They made those sacrifices.  They took on those challenges and ran those experiments and devoted their lives to expanding the reach of human understanding.

And that’s why we recognize them today. Because America has always been a place where good ideas can thrive and dreams can become real -- where innovation is encouraged and the greatest minds in the world are free to push the very limits of science and technology.

To understand that, you don’t have to look any further than the people on this stage. Three-quarters of our honorees were born outside of the United States.  From China, Germany, India, Canada and England, they searched for the best universities and the most advanced labs -- and they found them here, because America is the best place in the world to do the work that they do.

Jacqueline K.  Barton, California Institute of Technology, won the 2010 National Medal Science for discovery of a new property of the DNA helix long-range electron transfer, and for showing that electron transfer depends upon stacking of the base pairs and DNA dynamics.  Her experiments reveal a strategy for how DNA repair proteins locate DNA lesions and demonstrate a biological role for DNA-mediated charge transfer.

Ralph L. Brinster, University of Pennsylvania, won the 2010 National Medal of Science for his fundamental contributions to the development and use of transgenic mice.  His research has provided experimental foundations and inspiration for broad progress in germ line genetic modification in a range of species, which has generated a revolution in biology, medicine and agriculture.

Shu Chien, University of California, San Diego won the 2010 National Medal of Science for pioneering work in cardiovascular physiology and bioengineering, which has had tremendous impact in the fields of microcirculation, blood rheology, and mechanotransduction in human health and disease.

Rudolf Jaenisch, Whitehead Institute for Biomedical Research and Massachusetts Institute of Technology, won the 2010 National Medal of Science for improving our understanding of epigenetic regulation of gene expression, the biological mechanisms that affect how genetic information is variably expressed.  His work has led to major advances in our understanding of mammalian cloning and embryonic stem cells.

Peter J. Stang, University of Utah, won the 2010 National Medal of Science for his creative contributions to the development of organic super-molecular chemistry, and for his outstanding and unique record of public service.

Richard A. Tapia, Rice University, won the 2010 National Medal of Science for his pioneering and fundamental contributions in optimization theory and numerical analysis, and for his dedication and sustained efforts in fostering diversity and excellence in mathematics and science education.

Srinivasa S.R. Varadhan, New York University, won the 2010 National Medal of Science for his work in probability theory, especially his work on large deviations from expected random behavior which has revolutionized this field of study during the second half of the 20th century, and become a cornerstone of both pure and applied probability.  The mathematical insights he developed have been applied in diverse fields, including quantum field theory, population dynamics, finance, econometrics and traffic engineering.

Rakesh Agrawal, Purdue University, won the 2010 National Medal of Technology and Innovation for an extraordinary record of innovations in improving the energy efficiency and reducing the cost of gas liquifaction and separation.  These innovations have had significant positive impacts on electronic device manufacturing, liquefied gas production and the supply of industrial gases for diverse industries.

B. Jayant Baliga, North Carolina State University, won the 2010 National Medal of Technology and Innovation for development and commercialization of the insulated gate bipolar transistor and other power semiconductor devices that are extensively used in transportation, lighting, medicine, defense, and renewable energy generation systems.

Michael F. Tompsett, TheraManager, won the 2010 National Medal of Technology and Innovation for pioneering work in materials and electronic technologies including the design and development of the first charge-coupled device imagers.