November 1, 2011 at 11:59 AM ET by Megan Slack
Twitter Facebook Email
Summary:
Every $1 of federal investment in our national parks generates $4 in economic value to the public. 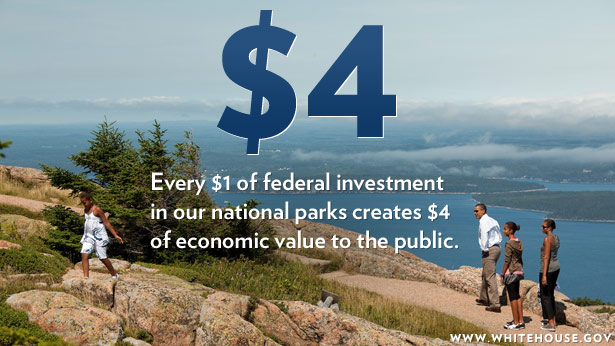 America's national parks make up an important part of our society. Besides preserving our history and protecting natural ecosystems, national parks are economic engines. Every $1 of federal investment in our national parks creates $4 of economic value to the public. These investments include projects to build, maintain, and repair facilities, replace outdated machinery and equipment with more energy efficient systems, and preserve natural and cultural resources. In fact, national parks generate $13.3 billion in local private-sector activity and support 267,000 private-sector jobs nationwide due to economic activity they generate.

Today, President Obama designated Fort Monroe in Hampton, Virginia, as our 396th national park. Fort Monroe, a historic fort in Virginia’s Tidewater region, played a pivotal role in the history of slavery in the United States. During the Civil War, the fort remained in Union possession and became a place for escaped slaves to find refuge. Fort Monroe closed its doors as a military base in September, but today’s proclamation ensures its legacy continues as a national monument.

“Fort Monroe has played a part in some of the darkest and some of the most heroic moments in American history. But today isn’t just about preserving a national landmark-- it’s about helping to create jobs and grow the local economy. Steps like these won’t replace the bold action we need from Congress to get our economy moving and strengthen middle-class families, but they will make a difference,” President Obama said at the signing.

According to an economic analysis commissioned by the Fort Monroe Authority in 2009, the Fort Monroe Reuse Plan--which includes preserving the majority of the buildings, landscapes, and scenic vistas located within the 570-acre National Historic Landmark District--will help create nearly 3,000 jobs in Virginia.