We the People Update

November 3, 2011 at 6:49 PM ET by Macon Phillips
Twitter Facebook Email
Summary:
We the People is still going strong a month after its launch, gaining nearly 31,000 new signatures everyday while working with users to improve and fine tune the experience.

It's been a little over a month since We the People launched and it's still going strong.  Here's a chart of its growth: 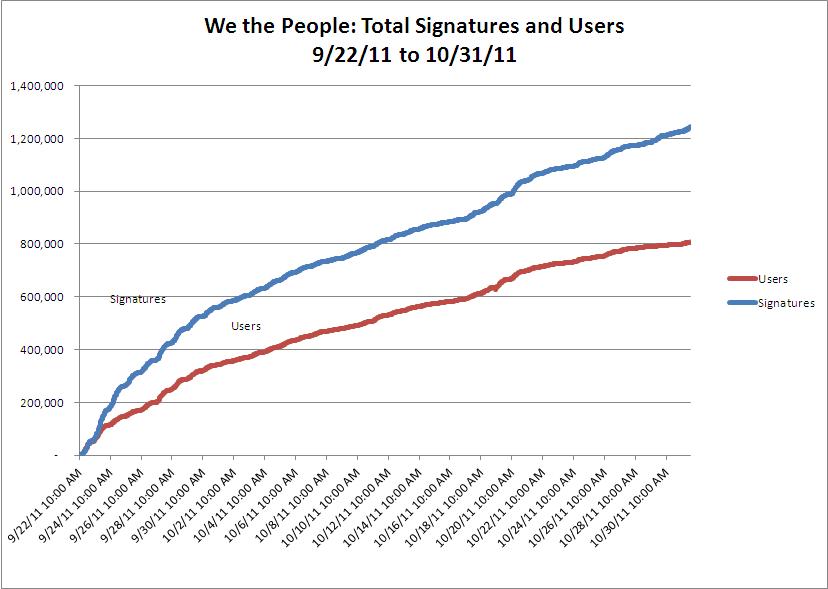 We the People is averaging nearly 20,000 new users and 31,000 new signatures every day. Our most active day for new users and signatures was the day of our launch, but we certainly haven’t slowed down: more petitions were created on October 26 than any other day since We the People has been active. Not surprisingly, we saw a spike when we started posting responses -- it was important to show people that we would follow through on our commitment to respond to petitions that meet the threshold.

Last week, we posted our first petition response to the site and since then have published six more. All of the responses are posted here, and more are coming soon.

At the risk of getting a little "meta," it's been interesting to see the response to our responses. There has been some frustration with the answers from those who disagree with Administration policy, and that's fair. But even more importantly, there has been subsequent debate about the merits of the Administration position based on the arguments laid out in the response. That's a big deal: while people may not agree with a position, it's crucial to understand its rationale. Take for example, this blog post about a recent response on patent reform.  If these petitions are fostering a debate that might not otherwise take place about the issues Americans care about, that’s a positive thing.

It's important to separate the substance of a response from the process that creates it. Every petition that reaches the threshold is put through a review process that begins with the policy experts who deal in the appropriate area. It's also important to be clear about expectations: reaching a signature threshold doesn't mean a petition's suggestion is automatically implemented. For example, many of the petitions are on matters that require Congress to act (take for example the recent response on the Defense of Marriage Act).

Additionally, after launch we received plenty of feedback from people about the technology and user experience behind We the People and we’ve been reading through it all in an effort to make the system even better. For example, even though the growth in users has been consistent, we've heard sporadic reports that some people had trouble logging in and creating accounts. Thanks to this feedback, we’ve made a few adjustments behind the scenes to improve this important part of the process.

It's important for us to continue collaborating with people using the tool to improve the experience and fine tune any rough spots we encounter. Prior to launching the We the People, all we had were projections to estimate how the system would react and grow in a live environment. We now have a good understanding of what works well and where we need to improve. Even before our launch day, we began compiling a list of improvements, new functionality and system tweaks. A large number of these were generated by our own team, but the most valuable ones have come from the end user: you.

In the past we've encouraged people to use the #WHWeb hashtag for feedback about the technology powering the White House's online program. Today we're taking that one step further by launching @WHWeb. This dedicated account will offer us a way to announce technology news (like modules being open-sourced, etc.) and build a valuable constituency of followers interested in improving WhiteHouse.gov's technology platform. So if you have technical questions, comments or feedback about We the People or WhiteHouse.gov technology in general, please tweet them @WHweb. If you are having issues creating a WhiteHouse.gov account, tweet us and we can help troubleshoot your issue. This will be another way for you to participate and collaborate with us as we grow We the People and other technology projects on WhiteHouse.gov.

If you aren't on Twitter but have an idea, our tech feedback form is an alternative way to reach the tech team.

Have more questions or want to learn more about We the People? We have some older blog posts that explain how it works here and here. Don't forget to take a look at the FAQ's for We the People as well as our privacy policy with information about the WhiteHouse.gov accounts needed to participate.