Partnering with Australia to Stop Violence Against Women

November 8, 2011 at 12:33 PM ET by Tina Tchen
Twitter Facebook Email
Summary:
Tina Tchen, the Executive Director of the White House Council on Women and Girls and Chief of Staff to the First Lady, reflects on her experience leading the US delegation to the Pacific Women's Empowerment Policy Dialogue.

Last week I had the honor of making my first trip to Australia to lead the US delegation to the Pacific Women's Empowerment Policy dialogue on eliminating violence against women, co-hosted by Australia and the United States. This was the third such policy dialogue, following similar gatherings earlier this year on women's empowerment and women's economic security. This series was launched by the US and Australian governments almost exactly a year ago, and this particular initiative on stopping violence against Women was announced by Secretary Clinton and Prime Minister Julia Gillard during her visit to the US on International Women’s Day in March 2011. Accompanying me to Canberra was Anita Botti, Deputy Director of the Department of State’s Office of Global Women’s Issues. 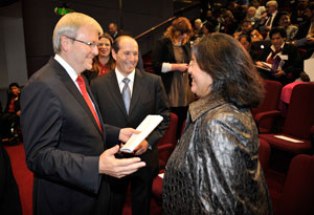 On Novermber 6th, 2011 Australian Foreign Minister Kevin Rudd with Jeffrey L. Bleich, United States Ambassador to Australia with Tina Tchen, the Executive Director of the White House Council on Women and Girls, at the opening of the dialogue for the 'Australia-US Pacific Women's Empowerment Policy Dialogue: Stopping Violence Against Women' initiative. November 7, 2011.

We were joined by colleagues from Australia, New Zealand, Papua New Guinea, Fiji,  Vanuatu, and other Pacific Island nations, as well as leaders from the Asian Development Bank, the Pacific Island Forum Secretariat, the World Bank, and UN Women.

The dialogue opened with an eloquent and passionate address by Australian Foreign Minister Kevin Rudd, who spoke clearly to the importance of ending violence against women and girls.  In addition to confronting the role of men as perpetrators, he emphasized the significance of male opposition to violence against women. Our Australian hosts also included Kate Ellis, the Minister for the Status of Women, and Penny Williams, Australia’s newly appointed  first Global Ambassador for Women and Girls.

Most memorable was the opportunity to meet and hear from women and men from across the Pacific that are battling violence against women in their own nations, where in many places nearly two thirds of women and girls experience serious domestic violence. This included Dame Carol Kidu, a legendary champion for women and the only woman member of parliament in Papua New Guinea. She called for the support of local solutions created by community leaders. We celebrated the inspirational work of organizations like the Vanuatu Women’s Centre, the Fiji Women's Crisis Centre, and in Port Moresby, Papua New Guinea, the support of Unwoven and that of police authorities in making market places safer for women and girls.

This inspirational and eye-opening summit provided an opportunity to learn about the unique cultural and geographic challenges faced by women in remote islands. Commonalities in the adversities and solutions of women and girls who experience violence unite us in a global commitment to eliminate this brutality and fear. I reminded delegates that their clients, friends and neighbors are not alone. Unhindered by vast distances, we stand together in our efforts to end violence against women and girls.

Tina Tchen is the Executive Director of the White House Council on Women and Girls and Chief of Staff to the First Lady.