The circular room was buzzing with excitement as the clocked ticked and the room started to fill with community leaders and advocates to end domestic violence and sexual assault. Diane Patrick, First Lady of Massachusetts, shared her personal account as a victim of domestic violence and how she, with support, overcame and prospered. Domestic violence does not define you, you define yourself. With this story percolating in everyone’s mind, the panelists discussed solutions.

Nathaniel Brewer, a Youth Peer Leader for the Start Strong Initiative, works with 11- to 14-year olds at community health centers and develops innovative programs to engage youth on this issue. For example, they dismantle popular music to create their own music label, with lyrics contrasting healthy and unhealthy relationships.  Lisa Martin Burke, a nurse practitioner and site director, for the Greater Lawrence Family Health Center at Lawrence High School in Massachusetts, spoke about her work as a health advisor at the high school. There, she created an anti-violence program to lead coaches and players through the process of recognizing the causes of violence and how to prevent it.  Craig Norbert-Bohm, the coordinator of the Men’s Initiative for Jane Doe Inc., spoke about the importance of federal attention on men and boys as an approach to ending violence against women. He considered this is a true mark of history in the movement. “We must realize that women are not safe in society until we change the nature of manhood,” Craig stressed, urging those in the room to support White Ribbon Day, when men can make a proclamation to be part of the solution to violence.

Participants were encouraged to look into their circle of influence and talk with others to find solutions. To help facilitate this conversation, the event included dialogue stations to discuss such topics as youth development and leadership, responsible fatherhood, sports and school cultures, higher education, and businesses. Participants reported out that they will carry forth the message and join the effort to make their communities more sensitive to the issue of violence against women.


Upon entering the gymnasium of York College in Jamaica, New York, some 500 youth from the New York City Housing Authority (NYCHA), ages 13-21, literally shook the floor boards as they buzzed around the gym collecting information about anti-violence initiatives in New York City. Resources were available on citywide youth engagement programs covering topics such as domestic violence and sexual assault assistance. After eating breakfast and visiting the resource tables, these youth made their way into the performance center where Ms. Lopez, board member of NYCHA, and Tamron Hall, MSNBC anchor, inspired students to redefine what it is to be in a man and to break the cycle of verbal and physical abuse that is perpetuated by society.

The U.S. Department of Education, U.S. Department of Health and Human Services, U.S. Department of Housing and Urban Development, and U.S. Department of Labor held a workshop at the New York City Housing Authority’s 10th Annual Domestic Violence Resource Fair.  “We Stand for Healthy Teen Dating Relationships” focused on the Male Perspective: Young Men as Leaders in Promoting Healthy Relationships with Women and Girls. Engaging roughly 80 high school students, college students and parents, nationally renowned anti-violence facilitators Joe Samalin of Men Can Stop Rape and Quentin Walcott of Connect-NYC dialogued with the group about the causes and consequences of abuse. Facilitators asked the group to describe women that they respect and why. The workshop ended with a series of suggestions about how they can engage other men in stopping relationship violence.  Participants left with an understanding of how they can personally engage on this issue: ‘say what you see.’ They were encouraged to stop abuse when it occurs and to contact professionals who are trained in this field. 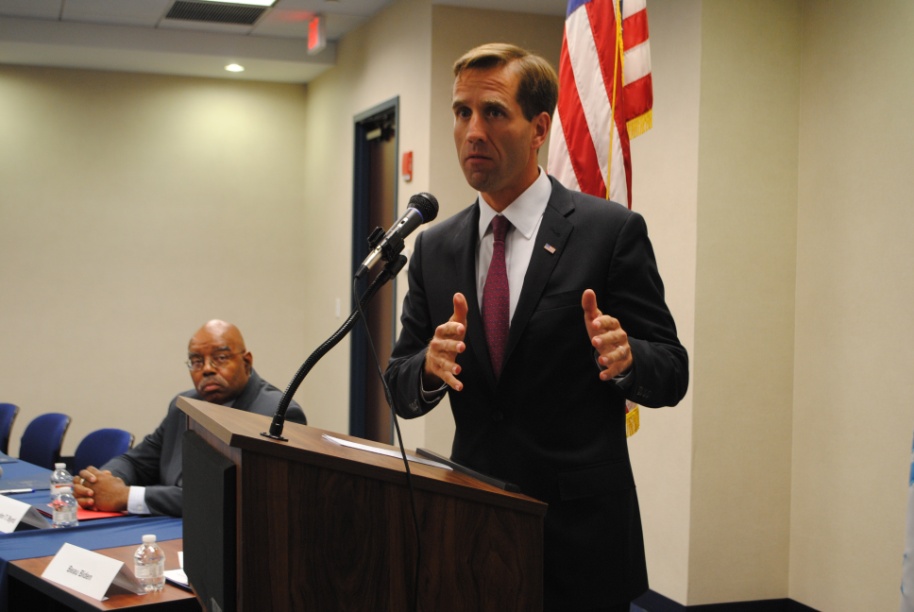 It wasn’t a pretty topic for a gorgeous fall afternoon, but the group that gathered in the large conference room of the Department of Housing and Urban Development in Philadelphia passionately engaged in a conversation on the causes and solutions of violence against women.  In response to the Vice-President’s call to action, the Philadelphia regional offices of the United States Departments of Education, Housing and Urban Development, and Health and Human Services hosted a community symposium on violence against women on Wednesday, October 26 in Philadelphia.

The tone for the afternoon was set with two powerful speakers, Delaware Attorney General Beau Biden and Associate Director of the Mayor’s Office of Faith-Based Initiatives (Philadelphia) Reverend Malcolm Byrd.  Both men shared with the group personal stories about acts of violence by men against women. After describing a recent domestic violence death on the streets of one Delaware town, Mr. Biden went on to explain the work of the Delaware Men’s Education Network, with the mission of educating young men and boys about nonviolence. He stated, “As a society, we need to make a cultural shift from prosecution of these crimes to prevention.”

Following Mr. Biden, Reverend Malcolm Byrd, gave a dramatic “call to action” to those assembled. After sharing his personal story about growing up in a violent home dominated by his father, he explained how he made the decision “not to be” his father, and began a lifelong commitment to educate others about nonviolence. He stressed the need for value-rich character formation and enrichment through education.

After hearing a video message from Vice President Biden, the group then heard from a dynamic panel of experts about programs and services that work to engage men and boys in ending violence against women and girls.  A very informative discussion followed the panel discussion and evidence of the success of the program could be heard as participants leaving the room asked for opportunities to continue the discussion with additional workshops.