Ed note: This blog was cross-posted from the Department of Justice. 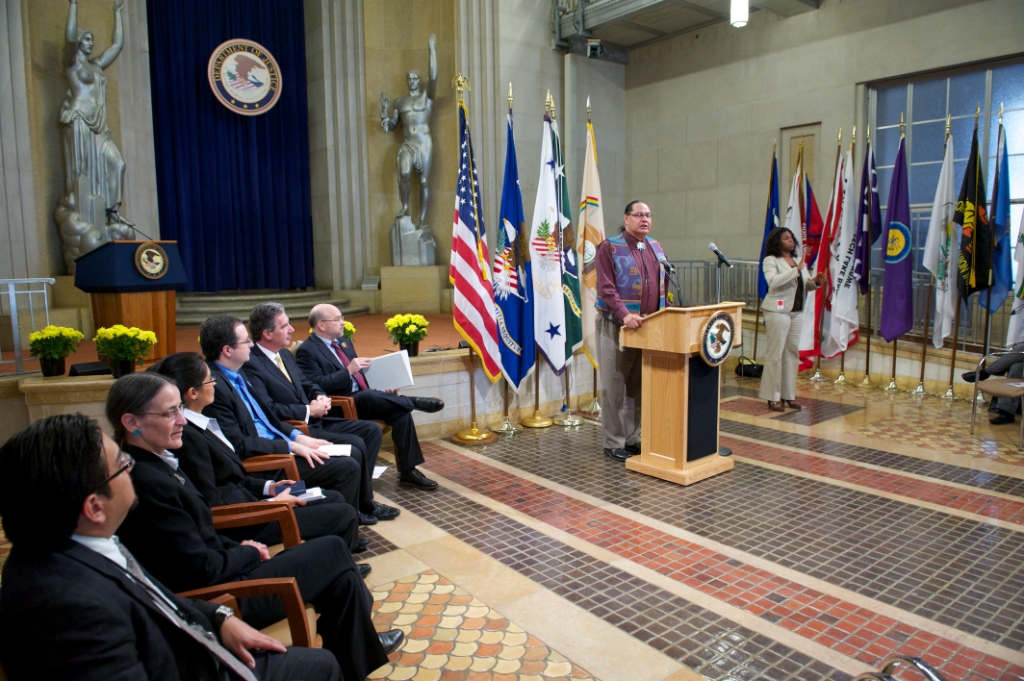 Mr. Dennis W. Zotigh delivers remarks before he performs a cultural piece at the commemoration. (Photo from the Department of Justice)

This week the Department of Justice held a special event in the Great Hall commemorating National Native American Heritage Month. Each November, the department honors the cultural traditions, contributions and history of America’s indigenous peoples in honor of their many sacrifices and contributions to our nation’s well-being.

“As we honor American Indian and Alaska Native Heritage month, we work to build on our continued progress strengthening tribal law enforcement.  We work to enhance our ability to prosecute crimes in Indian Country, and we work to reinforce a strong government-to-government relationship.”

Solicitor Tompkins spoke about how the Interior Department plays a major role in legal and policy decisions that impact the daily lives of Indian people. She also discussed her personal experiences as a Native American and the ways her life has been affected by federal law and policy, and how the law influenced her understanding of Navajo culture. Reflecting on her responsibilities as the Department of Interior Solicitor, Tompkins said:

“We will continue to strengthen our relationship with tribal governments and assist them as they protect their cultural identity and history through their own legal and political systems. I have great faith that we will chart the path forward with grace, honor, and justice that will make future generations proud.”

Department employees and guests were also honored by a cultural performance by Mr. Dennis W. Zotigh, a Kiowa, San Juan Pueblo and Santee Dakota Indian.  Mr. Zotigh is a nationally and internationally recognized performer and lecturer.

Under the leadership of Attorney General Holder, the department has launched critical tribal justice initiatives to meet the challenges facing American Indian and Alaska Native tribes.  In support of Indian Country law enforcement efforts, the department directed United States Attorney’s offices across the country to collaborate with tribal law enforcement officials and develop strategies to reduce crime.  The department also established a Violence Against Women Federal and Tribal Prosecution Task Force, which works on strategies to reduce violence against Native women. In addition, the  Coordinated Tribal Assistance Solicitation (CTAS) awarded nearly $127 million to support public safety initiatives in Indian Country.  Solicitor Tompkins, along with many other Department of the Interior colleagues, remain vigorous partners in these efforts to support public safety in tribal communities.

The department’s Environmental and Natural Resources Division also protects over 60 million acres of tribal lands and resources.  The division works to protect treaty rights, defend reservation boundaries and assert water rights.  This work helps to fulfill the promise that reservations can serve as homelands where tribal sovereignty and culture can flourish.

As we continue this month-long observance of Native American Heritage Month, we at the Department of Justice rededicate ourselves to fulfilling our promise to promote justice, and to help build healthy, safe, and sustainable tribal communities.   In doing so, we honor the many contributions and sacrifices that American Indians and Alaska Natives continue to make to the United States.

Learn more about the Justice Department’s efforts to promote tribal justice and safety at justice.gov/tribal. |  See more pictures from the event.