Taking Care of Our Young Heroes

November 9, 2011 at 9:52 AM ET by Jason Dempsey
Twitter Facebook Email
Summary:
The creative team behind Sesame Street have created a series of new resources to support military families 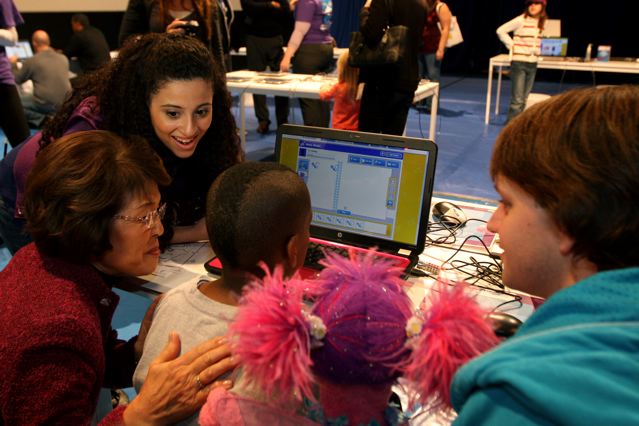 Patty Shinseki, Abby Cadabby from Sesame Street and Jessica and Shock from The Electric Company help a young boy express himself through music as part of the new military Families Near and Far site created by Sesame Workshop (familiesnearandfar.org). (by Evy Mages © 2011 Sesame Workshop)

As a young, single infantryman I would often hear the older veterans talk about how hard deployments were on their families.  Many even went so far as to say that deployments were harder on families than they were on soldiers themselves. At the time I did not believe them, but as my wife can readily attest, I’ve learned a lot since then.

Over the last ten years of war the military has had to adapt to a challenging and rapidly shifting battlefield environment. These challenges have received a lot of public attention and scrutiny, but no less important for the military community has been the challenge of sustaining families in the face of repeated deployments. This has been a difficult task, as service members have had to navigate periods of separation and reintegration, each time with children and spouses at different phases of their lives. And while service members are trained to understand their mission, it isn’t always easy to explain that mission to a three or five year old child.

Thankfully, military families continue to receive wonderful support from Sesame Workshop, the experts in communicating to children. This Saturday as I was fortunate to take my two young kids to the unveiling of Sesame Workshop’s latest resources designed to support our military families. The event on Saturday was a fun-filled morning for nearly 500 military family members that included dignitaries from the Department of Defense and Sesame Workshop, but most importantly for the bulk of the audience, also included such superstars as Gordon and Abby Cadabby. Joined by Shock and Jessica from the Electric Company, the Sesame Workshop team talked to the kids about communicating their feelings and also unveiled new tools that children can use to keep in touch with their deployed parents.

Developed in conjunction with the Defense Centers of Excellence for Psychological Health and Traumatic Brain Injury, these new resources include:

•           Feel Electric! - a free mobile app, available on the App Store, that encourages children to explore and express their emotions

H. Melvin Ming, president and CEO of Sesame Workshop, stated during the event that “During this month of the military family, I can’t think of a better way to renew our commitment to military families and to let them know we care and are here to help.” And while the children in the audience were probably too focused on the Muppets in attendance to hear his exact words, I’m pretty sure they got the message.