November 10, 2011 at 5:31 PM ET by Emily Miles
Twitter Facebook Email
Summary:
In honor of Domestic Violence Awareness month this past October, the Department of Education, the Department of Health and Human Services, and the Department of Housing and Urban Development collaborated to hold ten town hall events throughout the country on the topic of Engaging Men and Boys in Ending Violence Against Women. 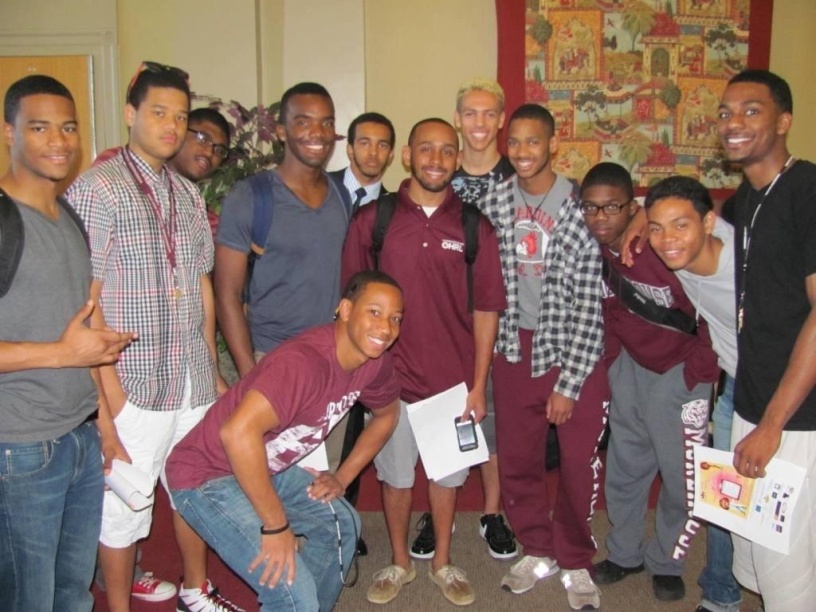 
On October 27th, the US Departments of Education, Housing and Urban Development, and Health and Human Services’ Office of Women’s Health, in partnership with Morehouse College, the Georgia Council Against Domestic Violence, the Wright Group and the “Ending Violence Against Women” HBCU Project, hosted a town hall meeting on the topic of engaging men in violence against women efforts.

With over 200 young men in the audience, and speakers covering the medical, psychological, legal, and social service communities, HUD Regional Administrator, Ed Jennings, gave a charge for “all men to stand up and step up to the challenge of stopping violence against women!” Dennis Bega, Education’s Deputy Director of Regional Communications and Outreach, followed suit by challenging the men present to “protect all women, including women you may not know, from violence at the hands of men.” Chyna McGarity, a survivor of domestic violence and a motivational speaker, model and author, gave a moving testimony about the hardships and challenges she faced in a marriage marred by domestic violence.

In response, the young male participants voiced their concerns and asked for guidance from the panelists on the safest and best way to help a woman leave and end an abusive relationship. The men learned from the panelists about the court process women must endure, along with the rights of victims and the feelings that women have while in violent relationships that may hinder them from seeking help.

After the discussions, participants were called to act by signing a pledge to be part of the solution. They were encouraged to advocate for men holding themselves and their friends accountable for stopping the violence against women.

On Thursday, October 27, 2011, the U.S. Departments of Health and Human Services, Education, and Housing and Urban Development hosted a town hall meeting at Northwestern Memorial Hospital in Chicago, Illinois, entitled Taking Action: How Men Can Stop Violence Against Women. The Region V committee was inspired by Vice President Biden's call to all Americans to raise awareness about dating and domestic violence.

The event started with a welcome address from the newly appointed HHS Regional Director, Kenneth Munson and opening remarks from Dr. Bechara Choucair, the Commissioner of the Chicago Department of Public Health. The panel featured lively remarks from Christian Murphy of Catharsis Productions, Reverend Renaldo Kyles of Chicago Public Schools Interfaith Initiative, Jae Jin Pak of the Community Counseling Center of Chicago, Stephen Adler of Rape Victim Advocates, Paul Schewe of the University of Illinois at Chicago, and Eric Schueb of the Indiana Coalition Against Sexual Assault. All of the men participating in the presentation provided valuable commentary on how they are personally connected to the mission of ending violence against women, in addition to formally representing the stance that their organizations take on the issue of violence against women.

The tremendous response to each presenter was demonstrated in the two dozen questions provided by the town hall participants. The event also included a public comment session in which enlightened feedback was provided by participants like Burgwell Howard, the Dean of Students at Northwestern University, and Alex Leslie from the Ohio chapter of "Men of Strength" and the Cleveland Rape Crisis Center. The event culminated with the revealing of a pledge for men that lists ten ways in which they can personally stop violence against women. The pledge will be a viral campaign hosted through the Rape Victim Advocates website later this month. We encourage men to submit their own personal statements on how they are working to end violence against women through this pledge.

The Domestic Violence Resource Center states that“one in four women will experience physical or sexual abuse by a partner in her lifetime.”  In 2010, 142 Texas women were killed by an intimate partner and that’s 142 too many.  How to stop this is to understand what domestic violence is.  It’s more than just physical violence; domestic attacks include emotional and verbal abuse.

During a recent event at First Baptist Church Dallas on Engaging Men in Stopping Violence Against Women, panel members from Battering Intervention Program, Love is Respect, Texas Association Against Sexual Assault, National Domestic Violence Hotline and Genesis Women’s Shelter came together to have an open dialog with students and advocates about this critical issue.

Jan Langbein from Genesis Women’s Shelter is passionate about Engaging Men in this work and feels strongly that it is the answer to ending this epidemic. Senator Royce West acknowledged and voiced his appreciation of Vice President Biden’s support of this initiative to raise the awareness of domestic violence and sexual abuse to a higher level. Texas Woman’s University professor and moderator Mark Sandel said that he believes that“violence against women will only end when men decide it is time for it to end and this is exactly the sort of intervention that is needed to further reduce the victimization of women.  But we must not stop short with just one town hall meeting.  We must continue to educate our community on this crucial issue.” 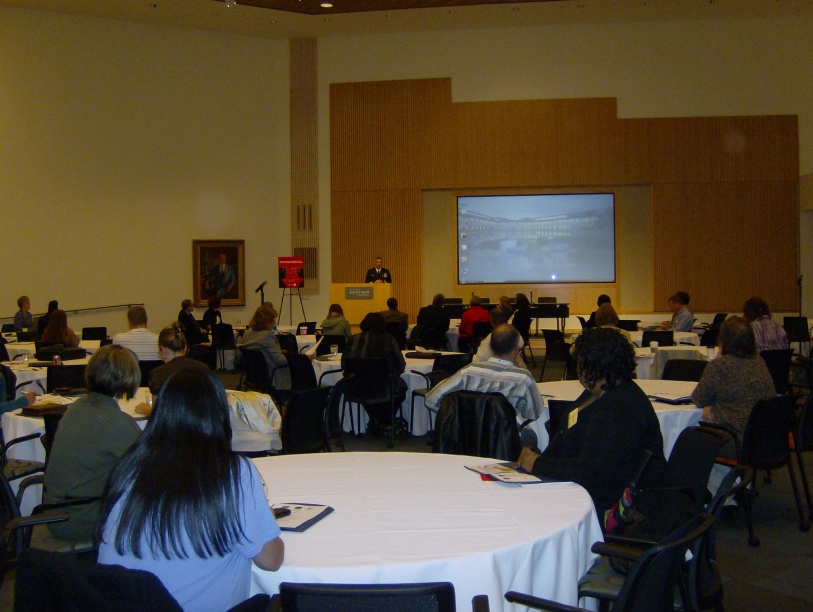 Inspired by the Vice President’s initiative to raise awareness on domestic violence, dating and sexual assault among women and girls and in support of the National Domestic Violence Awareness Month, the U.S. Department of Health and Human Services Office on Women’s Health [OWH] partnered with the Departments of Education and Housing and Urban Development to host a Regional Town Hall meeting.  Region VII, (comprised of Missouri, Kansas, Iowa, and Nebraska) hosted “Region VII Roundtable Town Hall Meeting: Empowering and Engaging Men in Reducing Violence against Women” in Kansas City, Missouri, on October 26,2011, at the Kauffman Convention Center. The purpose of the meeting was to facilitate a dialogue among various community organizations, community leaders, government officials, medical professionals, domestic violence advocates, domestic violence and sexual assault coalitions, and other public health leaders regarding how males can become more proactive in stopping violence against women and girls. The meeting also addressed other challenges related to preventing violence and assisting individuals and families affected by violence or sexual assault. In addition, there was a specific focus on programs that have had success with including males in preventive programs such as: Iowa’s Men’s Network, Project HART for youth, Project SAFE for youth, Family Peace Initiative (a batterers intervention program), and MOCSA Man-up program for youth, to name just a few.  Participants had an opportunity to hear about these programs first hand from the leaders.

The event was well attended by representatives from many of OWH’s community partners throughout the region. Notable attendees included Brook Balentine, a representative from U.S. Senator Claire McCaskill’s (D-Mo) office and Roosevelt Lyons, a representative from the Kansas City, Missouri Mayor Sly James’ office.  Dr. Curt Brungardt served as the key note speaker and spoke about his personal experience with domestic violence. Dr. Brungardt step-daughter, Jana, was murdered in 2008. Following her death, he and his wife, Christie founded Jana’s Campaign, an organization that seeks to reduce or prevent domestic and dating violence. Dr. Brungardt spoke passionately about his work with domestic violence issues and was adamant in conveying domestic violence as a men’s issue. DHHS representatives included CAPT Jose Belardo, Regional Health Administrator and Judy Baker, Regional Director.

Participants highlighted many inspiring and heartfelt moments during the open dialogue that took place after the keynote and panel presentations. Several attendees offered ideas for next steps and shared their experiences working in domestic violence. One attendee spoke of the work his organization is doing to provide an educational curriculum for coaches on the ways in which they can mentor boys and young men about the treatment of women. Also during the session, a former batterer, who now works as a peer mentor, attested to the profound effect of his involvement in the recovery of other men who batter women.  He expressed how beneficial the program was to him and how it changed his life and the way he treats his wife.  His testimony echoed Dr. Brungardt’s message of shifting perceptions of domestic violence from a women’s issue towards a men’s issue.

David Belt, coordinator of the Man Up! Program, provided closing remarks encouraging those working in domestic violence to engage men by reaching out to them in their environment and on their level.  Other attendees expressed gratitude for participating in the town hall meeting and stated it was helpful in facilitating meaningful discussion among those dedicated to mitigating domestic and dating violence against women in Region VII.