November 11, 2011 at 3:40 PM ET by Megan Slack
Twitter Facebook Email
Summary:
President Obama thanks veterans for their selfless service, and speaks about the importance of supporting those who have sacrificed for the good of the country. 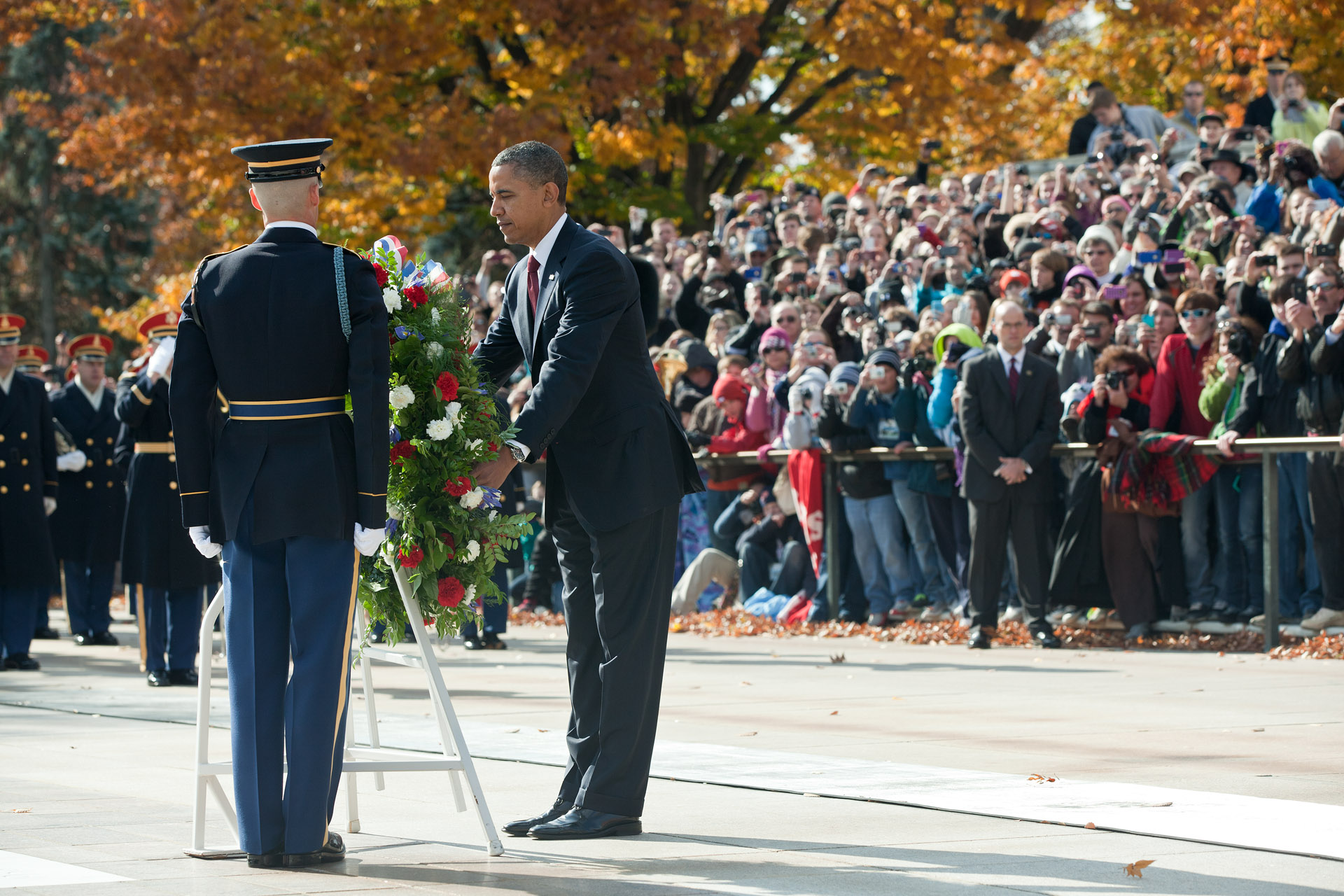 Today, President Obama honored the millions of Americans who have served in our nation's military by laying a wreath at the Tomb of the Unknown Soldier at Arlington National Cemetery. After the ceremony, the President thanked veterans for their service, their sacrifice, and their extraordinary accomplishments:

To all our nation’s veterans:  Whether you fought in Salerno or Samarra, Khe Sanh or the Korengal, you are part of an unbroken chain of men and women who have served this country with honor and distinction.  On behalf of a proud and grateful nation, we thank you.

When I spoke here on this day two years ago, I said there would be a day before long when this generation of servicemen and women would begin to step out of uniform.  And I made them a promise.  I said that when your tour ends, when you see our flag, when you touch our soil -– you will be home in an America that is forever here for you, just as you’ve been there for us.

For many, that day has come.  Over the past decade, more than 5 million Americans have worn the uniform of the United States Armed Forces. Of these, 3 million stepped forward after the attacks of September 11th, knowing full well that they could be sent into harm’s way.  And in that time, they have served in some of the world’s most dangerous places. Their service has been selfless. Their accomplishments have been extraordinary.

In Iraq, they have battled a brutal insurgency, trained new security forces and given the Iraqi people the opportunity to forge a better future.  In Afghanistan, they have pushed back the Taliban, decimated al Qaeda, and delivered the ultimate justice to Osama bin Laden.  In concert with our allies, they have helped end Qaddafi’s brutal dictatorship and returned Libya to its people.

Because of their incredible efforts, we can stand here today and say with confidence -– the tide of war is receding. In just a few weeks, the long war in Iraq will finally come to an end. Our transition in Afghanistan is moving forward.  My fellow Americans, our troops are coming home.

President Obama also spoke about the importance of making sure our veterans, who chose to serve a call greater than themselves, are able to take full advantage of the opportunity they helped secure through their service:

So on this Veterans Day, let us commit ourselves to keep making sure that our veterans receive the care and benefits that they have earned; the opportunity they defend and deserve; and above all, let us welcome them home as what they are -- an integral, essential part of our American family.

See, when our men and women sign up to become a soldier or a sailor, an airman, Marine, or Coast Guardsman, they don’t stop being a citizen. When they take off that uniform, their service to this nation doesn’t stop, either. Like so many of their predecessors, today’s veterans come home looking to continue serving America however they can. At a time when America needs all hands on deck, they have the skills and the strength to help lead the way.

Our government needs their patriotism and sense of duty. And that’s why I’ve ordered the hiring of more veterans by the federal government. Our economy needs their tremendous talents and specialized skills.  So I challenged our business leaders to hire 100,000 post-9/11 veterans and their spouses over the next few years and yesterday, many of these leaders joined Michelle to announce that they will meet that challenge.

The President said that veterans themselves are proof that there is no challenge too difficult to face:

We know it will be hard.  We have to overcome new threats to our security and prosperity, and we’ve got to overcome the cynical voices warning that America’s best days are behind us. But if there is anything our veterans teach us, it’s that there is no threat we cannot meet; there is no challenge we cannot overcome. America’s best days are still ahead. And the reason for that is because we are a people who defy those voices that insist otherwise.  We are a country that does what is necessary for future generations to succeed.