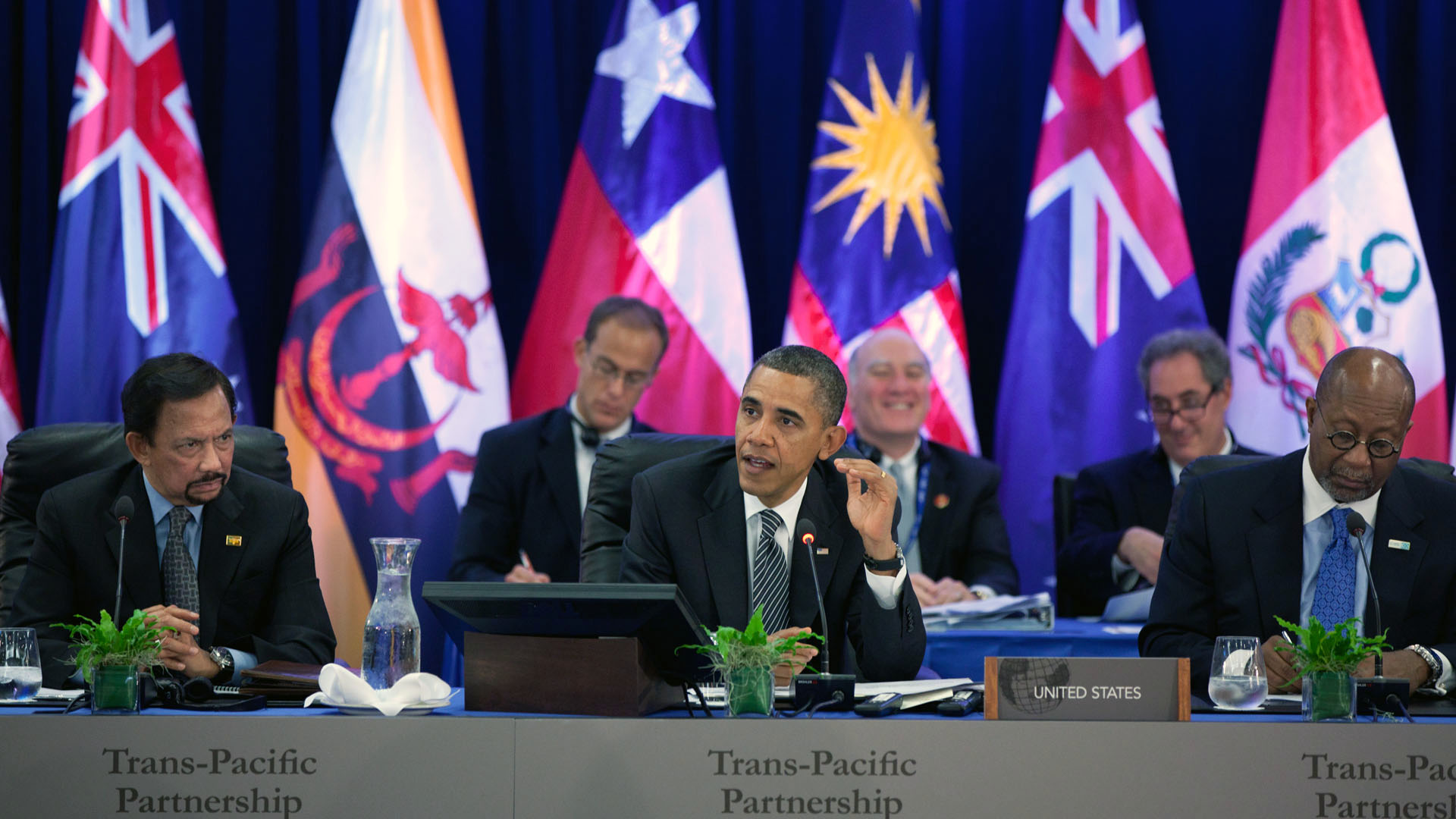 President Barack Obama attends a meeting with the Trans-Pacific Partnership at the APEC summit in Honolulu, Hawaii, Saturday, Nov. 12, 2011. At left is Hassanal Bolkiah, the Sultan of Brunei, and right is U.S. Trade Representative Ron Kirk. (Official White House Photo by Pete Souza)

President Obama announced in November 2009 the United States’ intention to participate in the Trans-Pacific Partnership (TPP) negotiations to conclude an ambitious, next-generation, Asia-Pacific trade agreement that reflects U.S. priorities and values.  This agreement will boost U.S. economic growth and support the creation and retention of high-quality jobs at home by increasing American exports to a region that includes some of the world’s most robust economies and that represents more than 40 percent of global trade.

As the President noted yesterday:

We just had an excellent meeting, and I’m very pleased to announce that our nine nations have reached the broad outlines of an agreement.  There are still plenty of details to work out, but we are confident that we can do so.  So we've directed our teams to finalize this agreement in the coming year.  It is an ambitious goal, but we are optimistic that we can get it done.

The TPP will boost our economies, lowering barriers to trade and investment, increasing exports, and creating more jobs for our people, which is my number-one priority.  Along with our trade agreements with South Korea, Panama and Colombia, the TPP will also help achieve my goal of doubling U.S. exports, which support millions of American jobs.

Later in the day, President Obama participated in an APEC CEO Business summit, including a question and answer session with Boeing CEO, Jim McNerney.

In the afternoon, President Obama hosted bilateral meetings with Prime Minister Noda of Japan, President Medvedev of Russia and President Hu of China.

Prime Minster Noda expressed Japan’s interest in the Trans-Pacific Partnership agreement, with President Obama welcoming and encouraging Japan’s interest in the TPP agreement, noting that eliminating the barriers to trade between our two countries could provide an historic opportunity to deepen our economic relationship, as well as strengthen Japan's ties with some of its closest partners in the region. 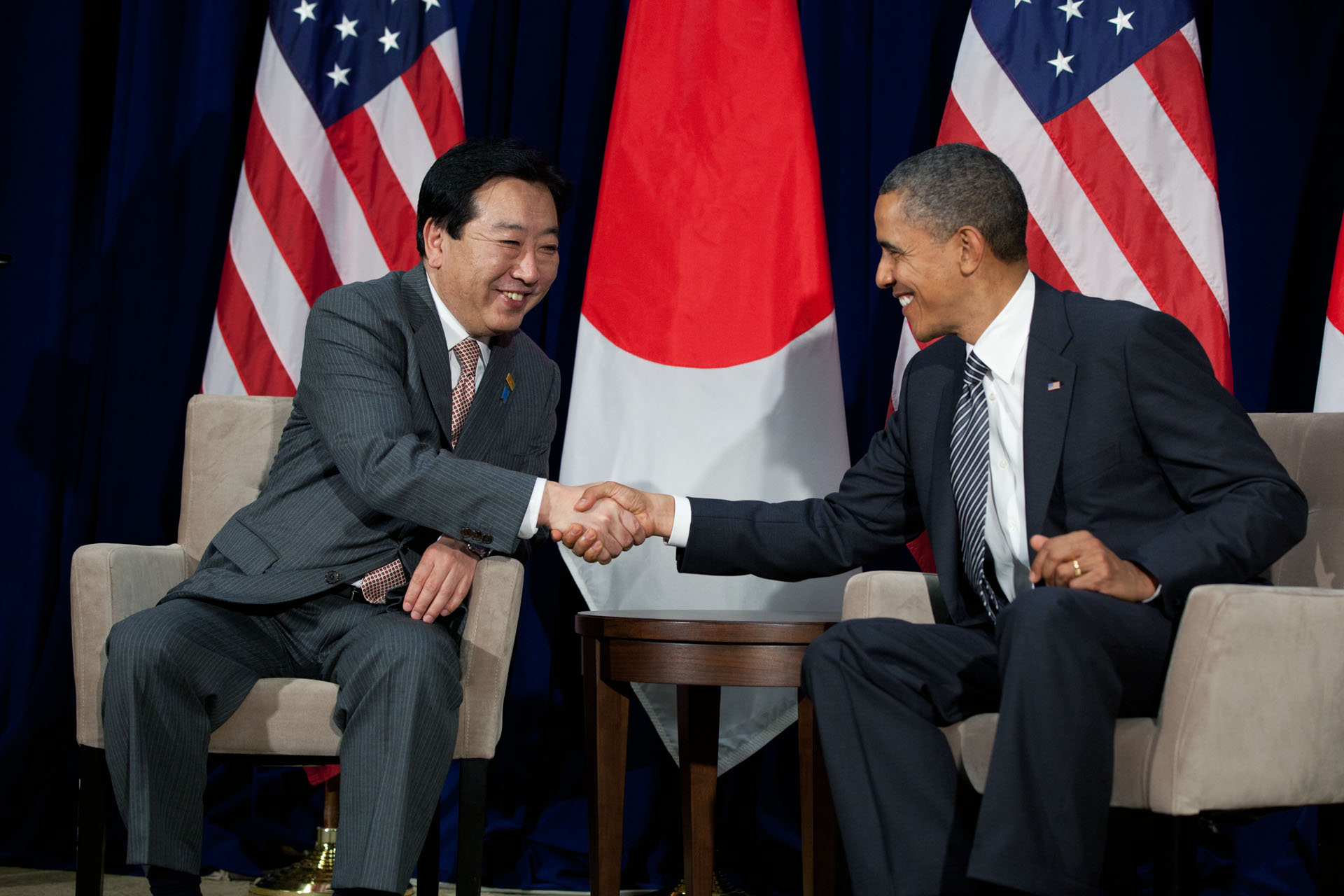 Next, President Obama met with President Medvedev of Russia, where they had a wide-ranging discussion, in particular focusing on a number of security issues where the U.S. and Russia had significant interested.  This included Afghanistan, and the importance of all regional parties assisting the Afghan government in stabilizing the country for the benefit of the Afghan people as well as Iran and its nuclear program.  President Obama also made an important announcement:

Although it’s not official yet, the invitation has been extended to Russia to join the WTO, as a testament to the hard work of President Medvedev and his team.  We believe this is going to be good for the United States, for the world, as well as for Russia, because it will provide increased opportunities for markets in which we can sell goods and products and services, as well as purchase good, products and services without some of the traditional barriers.

Finally, President Obama met with President Hu of China.  He noted that cooperation between the world’s two of the largest countries and largest economies was vital not only to the security and prosperity of our own people, but also vital to the world.

Such cooperation is particularly important to the Asia Pacific region, where both China and the United States are extraordinarily active.  We are both Pacific powers.  And I think many countries in the region look to a constructive relationship between the United States and China as a basis for continued growth and prosperity.

Lastly, in the evening the President and the First Lady welcomed APEC leaders and their spouses for a dinner and reception followed by a cultural performance at the Hale Koa Hotel in Hawaii.

Leaders and their spouses watch a hula performance at the APEC summit at the Hale Koa Hotel in Honolulu, Hawaii, Saturday, Nov. 12, 2011. (Official White House Photo by Pete Souza)