The Campaign to Cut Waste is Saving Billions 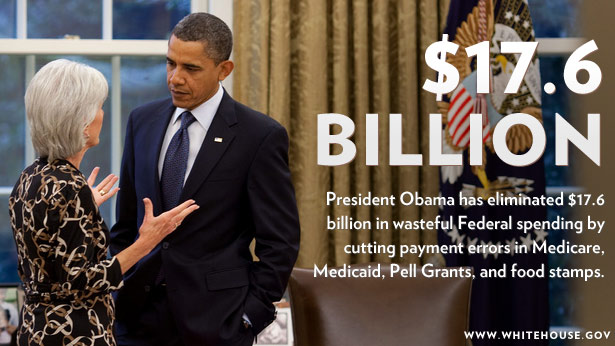 Nearly two years ago, President Obama signed an executive order to begin an aggressive campaign against government waste -- and directed federal agencies to prevent $50 billion in improper payments by the end of 2012.

In 2011 alone, this campaign netted $17.6 billion in savings by cutting payment errors for programs like Medicare, Medicaid, Pell Grants, and food stamps.

When the President issued the order, his goal was to see the error rate drop from 5.42 percent to 4.2 percent. Today, we're able to project that, by 2012, the rate will drop all the way to 3.8 percent.

President Obama has asked Congress for aggressive new tools to help the federal government save even more money -- as much as $160 billion over the next decade. But because we can't wait for lawmakers to build on this progress, the Obama administration is moving forward with additional steps to find savings.

The Department of Health and Human Services will soon launch four new pilot programs to reduce the error rate further and cut Medicare and Medicaid waste and fraud. And Jack Lew, the Director of the Office of Management and Budget, just directed federal agencies to step up their oversight of contractors and grant recipients in order to eliminate waste and fraud.

For more information on the work to reduce payment errors, visit paymentaccuracy.gov.