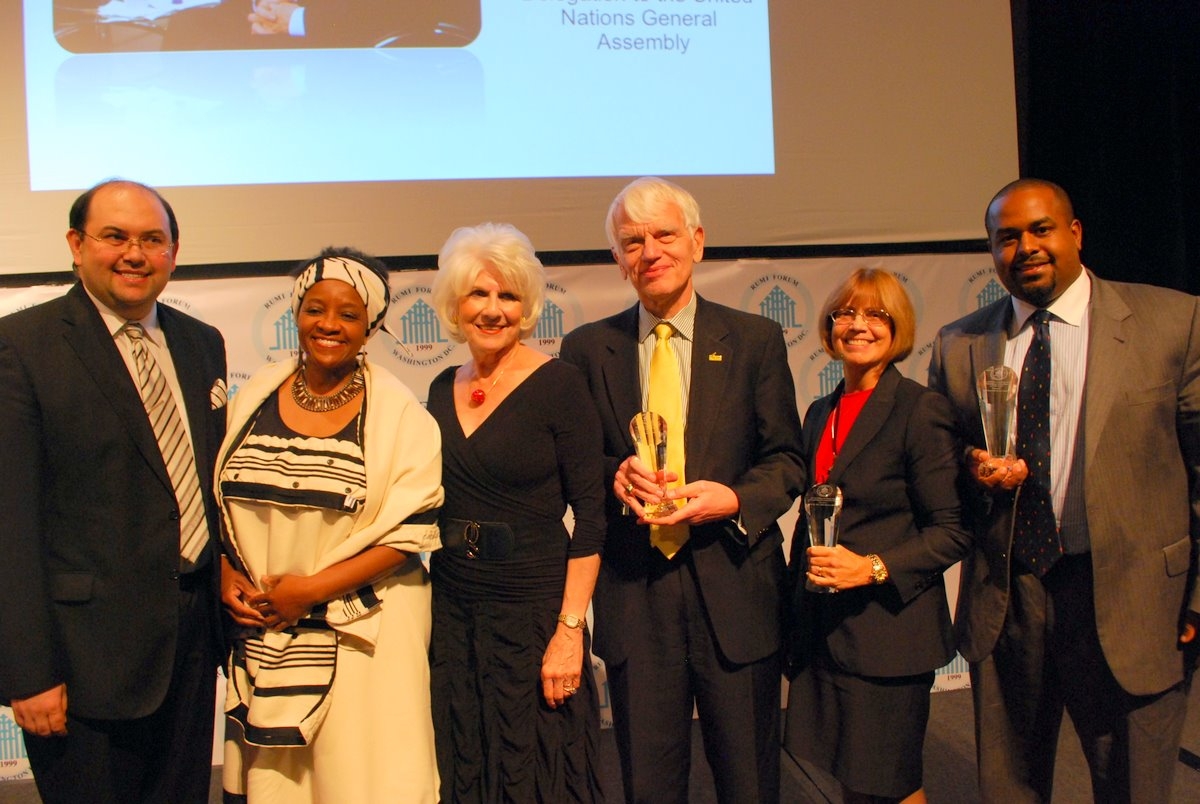 Launched in 1999, the Rumi Forum has consistently worked to foster interreligious and intercultural understanding at a pivotal time in our human history.  Recently, we were honored to attend the 2011 Rumi Peace and Dialogue Awards, the Turkish American organization’s annual celebration of leadership towards global harmony.

The Director of our Office, Joshua DuBois, received the “Extraordinary Commitment to Public Service Award” for his work as Special Assistant to the President and Executive Director of the Office of Faith-based and Neighborhood Partnerships.  Also recognized by the Rumi Forum were Archbishop Desmond Tutu, Dr. Alan G. Merten, Diane Rehm, and Rev. John Bryson Chane.  Each was commended for his or her work to promote peace and dialogue through service in government, church, higher education, or media.

Joshua DuBois reflected on President Obama’s formative experience working across religious lines on the South Side of Chicago. Today, this commitment to interfaith collaboration is reflected in the President’s Interfaith and Community Service Campus Challenge, in which more than 250 colleges, universities, and theological schools are participating in the first year. The Religion and Foreign Policy Working Group, recently launched by the State Departmentand our Partnerships Office, engages the expertise of diverse religious and civil society leaders to explore the role of religious understanding and engagement in US foreign policy.

Joshua and his office “look forward to working with the Rumi Forum to advance intercultural understanding in our government, in our country, and around the world, motivated by the President’s belief as stated in his inaugural address that, ‘our patchwork heritage is a strength, not a weakness. We are a nation of Christians and Muslims, Jews and Hindus - and non-believers. We are shaped by every language and culture, drawn from every end of this earth.’”

Upon accepting the award on her father’s behalf, Nontombi Naomi Tutu shared a quote from Rumi, the 13th-century Sufi mystic whom Archbishop Tutu often cites, saying, ‘Move outside the tangle of fear-thinking.’ The Rumi Forum awardees are among those leading our world in doing just that.

Turkey suffered several powerful earthquakes recently. Our thoughts and hearts are with the people of Turkey in this difficult time.

Jonathan Amgott is an Intern at the White House Office of Faith-based and Neighborhood Partnerships.