November 17, 2011 at 4:00 PM ET by Emily Miles
Twitter Facebook Email
Summary:
In honor of Domestic Violence Awareness month this past October, the Department of Education, the Department of Health and Human Services, and the Department of Housing and Urban Development collaborated to hold ten town hall events throughout the country on the topic of Engaging Men and Boys in Ending Violence Against Women. 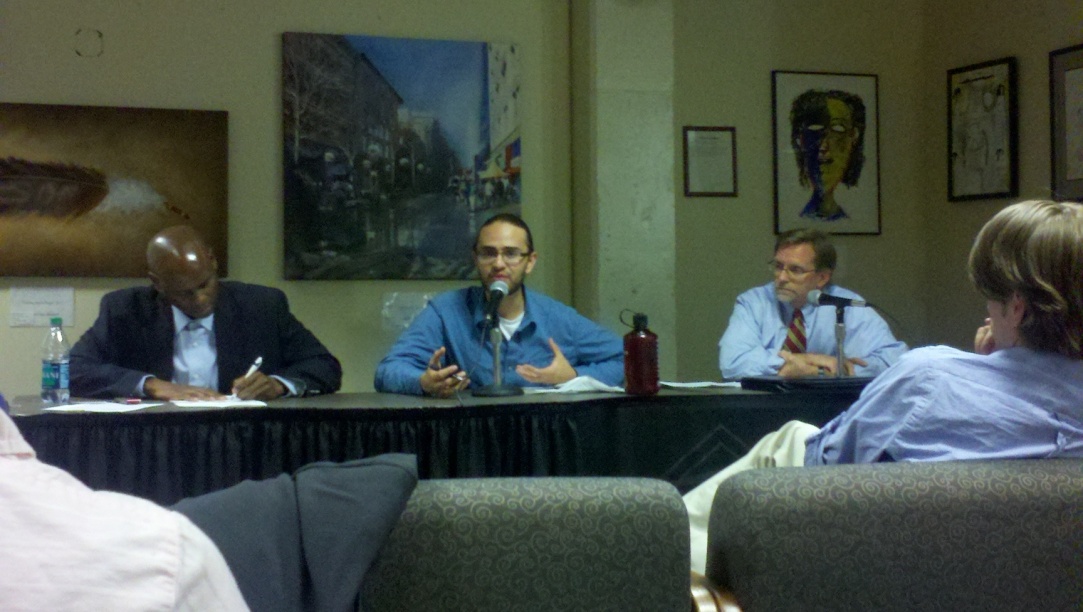 On the afternoon of October 25th, 2011 approximately 77 people gathered at the Multicultural Lounge of the Tivoli Student Union, located on the Auraria campus in Denver, CO to attend the event sponsored by the Region VIII US Departments of Health & Human Services (HHS), Housing and Urban Development (HUD) and Education (Ed), titled: “Men taking the lead: Preventing Dating Violence and Sexual Assault.” The format of the event consisted of two panels followed by a community discussion. This goal of this event was to raise awareness about men’s role in intimate partner violence prevention and to elicit recommendations from attendees at the events. The event was made possible by the partnership of The Phoenix Center at Auraria and the Center on Domestic Violence, University of Colorado Denver.

The weather had turned cold and gray and Denver was expecting its first big snow storm, but that did not prevent people from attending.  Men, women, students, and organizations all came to voice their concerns and share their experiences. One young woman drove three hours from Wyoming to attend. The room was warm and cozy, the chairs were cushioned, and our phenomenal moderator, Tyler Osterhaus, Chair of the Colorado Men Against Domestic Violence, facilitated an atmosphere for sharing. The sharing that took place was remarkable - it was personal and it was emotional. Three special young men from Project Pave, an organization that empowers youth to end the cycle of relationship violence, left the audience in awe.  Their stories and the work they do to end violence in their schools and communities filled the room with positivity and inspiration.  They gave all of us hope that engaging young men is a reality that is happening in our communities, which many of us present were unaware of.  Mitch Trebesh, the last youth panelist, is a recent college graduate that felt so committed to this issue that he took a job as the youth Violence Prevention Program Coordinator in Ft. Collins, CO. His work serves as a bridge between high school aged youth and young adult leaders working to end intimate partner violence.

The panel of community leaders shared their knowledge and experiences with the audience.  Brother Jeff Fard, a community organizer and leader in the African Community in Denver, left everyone speechless.  He taught us that we have to know what we are up against, what young people listen to, and what they see in the media and on the internet so that our efforts can make an impact.  David Hinojosa, from Moving to End Sexual Assault, emphasized the importance of culturally appropriate messages as he gave an example of working with Latino men and explaining how the word ‘Macho’ in Aztec actually means, “Someone who is worth imitation.”  Finally, Rich Batten from Public Strategies left us with the valuable message, “Men not only need the support of other men in this work, but men also need the support of women.”  The session ended, but the discussion continued.  People were exchanging information and ideas, and new partnerships were being created.  One young man in the audience who happened to see the flyer at the bookstore left on a mission to join this movement. 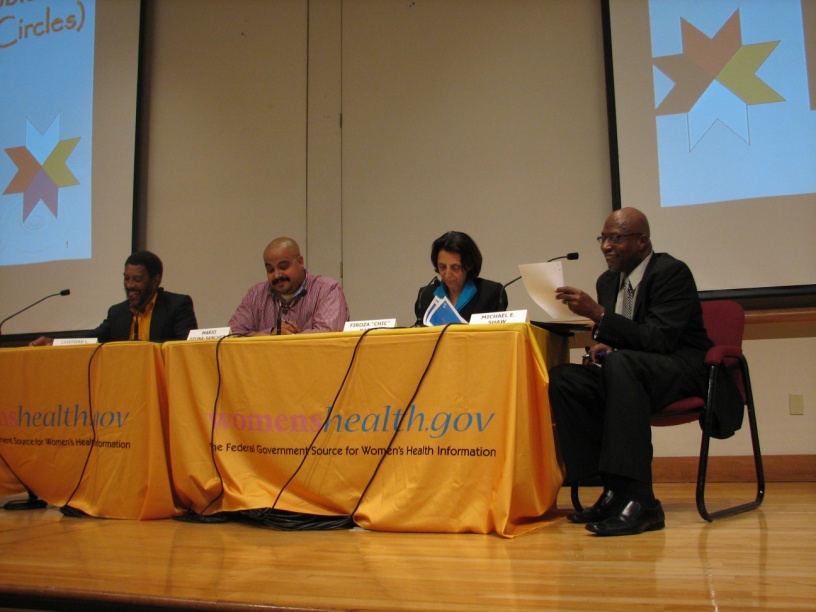 The Region IX U.S. Departments of Health and Human Services, Education, and Housing and Urban Development, along with the San Francisco Federal Executive Board, co-sponsored a town hall titled “Engaging Men and Boys in Ending Violence Against Women” at the Ronald V. Dellums Federal Building in Oakland on October 27, 2011 from 8:30 a.m. to 4:30 p.m.  This regional town hall was held in response to Vice President Biden’s call to action to end violence against women.

The town hall featured four panel presentations which focused on (1) Engaging Boys and Teens, (2) Engaging Men, (3) Engaging College Students, and (4) Engaging through Culture.  After each panel discussion, audience members were invited to share their concerns, questions, and comments.  The event’s moderators and panelists were a virtual “who’s who” from the most respected family, health-care, community activist and local-government organizations in the region.  Presenters and participants reflected the fact that this is the most culturally, racially, and ethnically diverse region in the nation.  The 100+ audience represented county and state health departments, colleges and universities, faith and community-based organizations, health centers, hospitals, schools, social service agencies, county board of supervisors, professional associations, youth programs, and Congressional and Senatorial field staff.

A major conclusion which the audience drew was that we should work together to eliminate violence against women and girls regardless of our cultural experiences and identities.  The consensus was that people wanted to move away from the “us” versus “them” perspective and to promote a healing in every community.  This could be accomplished by determining what programs are working and sustaining them.  Toward that end, most of the audience wanted to continue this dialogue in some form after the town hall.  We will be working with them to develop a Region IX Work Group on Violence Prevention.

How do you measure commitment to a cause?  Air miles might be a good place to start.  Like the more than 1,700 air miles a domestic violence provider flew from Bethel near the Bering Sea in western Alaska to Seattle for the three-hour EngageMENt Northwest, a regional conference hosted by the regional offices of the federal Departments of Education, Health and Human Services, and Housing and Urban Development on ways to engage men in working with women - and other men - in preventing violence against women. The flights to and from Bethel took three times longer than the conference itself.

And he wasn't the only one among the nearly 140 participants who traveled hard and long and on short notice to attend.  No surprise, lots of folks came from the Seattle and Tacoma, Bellingham and Olympia.  But there were also plenty of attendees from Boise and Portland, Spokane and Eugene and other cities - large and small - across Alaska, Idaho, Oregon and Washington.  The statewide coalitions against domestic violence in all four states sent representatives. Congressman Jay Inslee was represented. Academic institutions like Western Washington University, the University of Washington and public schools participated.  Even Governor Sean Parnell of Alaska sent two personal representatives.

In discussing ideas they could offer to engage more men - young and old - in preventing violence against women, much attention was paid to the "landscapes" of domestic violence.  The advocate from Bethel, for example, spoke of challenges posed by the physical landscape, of how hard it was for a shelter in one small, rural Alaska village to respond quickly and effectively to reports of abuse in a village just as small and isolated 300 miles away, "especially since we know the perpetrator is still in the village."  A representative of a Seattle nonprofit which serves newly-arrived immigrant communities spoke about overcoming barriers created by so many cultural traditions which are only now coming to recognize that women are not property and violence against them is not morally condoned.  And a young man talked about the difficulties of "changing the culture" on campuses where, for too many, "let's party!" is the order of the day.

But he wasn't hopeless, telling the story of how he, as a freshman, was "dragged" by his sister, a senior, to a stop violence meeting on campus he almost immediately felt at home, that this was something to which he could - and should - commit.  And, now, it's his life's work. So, too, for another panelist who loves to coach sports, almost any sport, from soccer to basketball, baseball to football.  Sure, he said, you have to teach the boys the skills to hit the ball or make the tackle.  But sports, he's realized, is all about attitude, about winning both on the field and off.  "Get them the domestic violence message early," he explained, "and you'll have them for life."

And, even though the agenda was packed and the time was short, a consensus appeared to evolve from the participants of tools they’d need to engage more men in preventing violence against women.  Tools like more funding.  Better collaboration among Federal agencies.  And a communications infrastructure to enhance sharing and partnerships among and between advocates, providers, educational institutions, law enforcement and government agencies at all levels.

"I was quite surprised," said HUD Northwest Regional Administrator Mary McBride once the conference ended, "that so many people came up to me to thank Education, HHS, and HUD for hosting this conference and for soliciting their views on what can be done to engage men in this cause.  They are the ones who are toiling in the vineyards across the Northwest and finding ways to engage men.  Their enthusiastic participation in EngageMENt Northwest clearly demonstrates their appreciation for policy-makers in Washington and the federal government who share their commitment."