Bringing together community substance abuse organizations, prevention advocates, law enforcement officials, members of the local judicial system, and representatives from national African American organizations, the group’s discussion centered around the current needs of the community and fostering collaboration for an integrated approach to building a healthier community.  Co-hosted by the Congresswoman and Director Kerlikowske, the roundtable also highlighted the common understanding that reducing drug use and its consequences is a process that must include a balance of public health and public safety needs, and greater emphasis on research around the science of addiction. 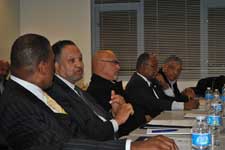 Participants at the roundtable share ideas
and discuss the needs of the community,
Los Angeles, November 10, 2011

“As our nation works to recover from one of the greatest recessions we’ve had, we must do everything we can to lessen the harm that drug use causes to the health, safety, and economic potential of our nation.  As part of this effort, we must reform our criminal justice system so that it recognizes drug addiction as a disease and works in a way that is fair and equitable to every American.  This challenge requires new and innovative ways of thinking about how we address our drug problem,” said Director Kerlikowske.

Recently, the Obama Administration has made significant progress in reducing disparities in the criminal justice system.  One year ago, President Obama signed the Fair Sentencing Act into law.  This important and long-overdue criminal justice reform dramatically reduced a 100-to-1 sentencing disparity between powder and crack cocaine.  The Administration also provided support for the Second Chance Act, which passed Congress with overwhelming bipartisan support and provides resources for common sense, evidence-based approaches to reducing crime.  Specifically, the Act provides funding for programs that improve coordination of reentry services and policies at the state, tribal, and local levels, including demonstration grants, reentry courts, family-centered programs, substance abuse treatment, employment, mentoring and other services needed to improve transition from prison and jail to communities and reduce recidivism.

To continue this progress, the Obama Administration’s National Drug Control Strategy recognizes that the criminal justice system plays a vital role in reducing the costs and consequences of crimes committed by drug-involved offenders. Director Kerlikowske and Congresswoman Waters are continuing their collaboration with communities and affected populations across the country to ensure that innovative, evidence-based solutions are used to foster healthy individuals and safe communities.