November 21, 2011 at 7:14 PM ET by Megan Slack
Twitter Facebook Email
Summary:
Veterans share their own stories about the difficulties returning service members face when transitioning into the civilian workforce. 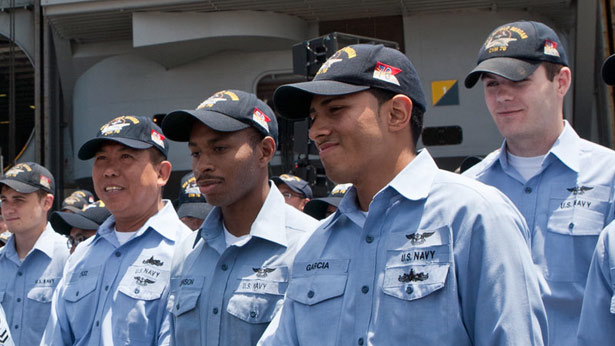 More than 1 million service members will return to civilian jobs as the wars in Afghanistan and Iraq wind down. Despite the fact these veterans have unique skills and experiences that make them excellent hires for any civilian business, their unemployment rate tops 12 percent.

President Obama believes that no veteran who fought for our country should have to fight for a job once they come home, and is working hard to help our nation’s heroes get back to work. Today, he signed two tax credits that encourage business to hire veterans. In addition to the 120,000 veterans hired by the federal government, he challenged the private sector to train or hire 100,000 veterans and military spouses. His Administration launched a host of online tools to help veterans in their job search, including a job bank with more than 500,000 listings for positions at companies looking to hire returning service members.

We’ve talked to a number of veterans who have experienced the difficulty of finding a job after returning to civilian life. Find their story below and click to read more.

Jason Hansman managed hundreds of reconstruction projects that totaled millions of dollars while serving in Iraq, but received only one job offer, to fill a night mall cop position.

Navy veteran Eric Smith has more than five years experience as a military medic but works today as a hospital janitor.

Maria Canales, an Army veteran, spent nearly four years looking for a job because she had trouble communicating how the skills she learned in the military prepared her to be an excellent employee in the civilian workforce.

Justin Constantine, a Marine Corps veteran, explains why neglecting our veterans is a disservice to our country and our tax dollars.

Matt Colvin joined the Air Force on September 11, 2001 and today works for Iraq and Afghanistan Veterans of America, supporting veterans once they leave active duty.

Veteran Anthony Luberto had to turn to a headhunter when looking for work because civilian employers had trouble recognizing how his skills and leadership experience would translate into the private workforce.

Tireak Tulloch took an entry level position after leaving active duty that even the person hiring him knew he was overqualified for based on his experience in the Marine Corps.

Nicolas Terrazas used his personal network to find a job after leaving the Army Reserves, but says that other veterans aren’t as likely to have the same resources without extra help.

Army Veteran John Kamin says that veterans face unique difficulties in transitioning to the civilian job market. “It falls on them to pretty much exploit a skill that the military does not teach you, which is looking out for number one,” he says.