November 21, 2011 at 2:55 PM ET by Brad Cooper
Twitter Facebook Email
Summary:
NASCAR invited 5,000 veterans, service members and their families to attend the lsat race of the season as part of their support for Joining Forces. 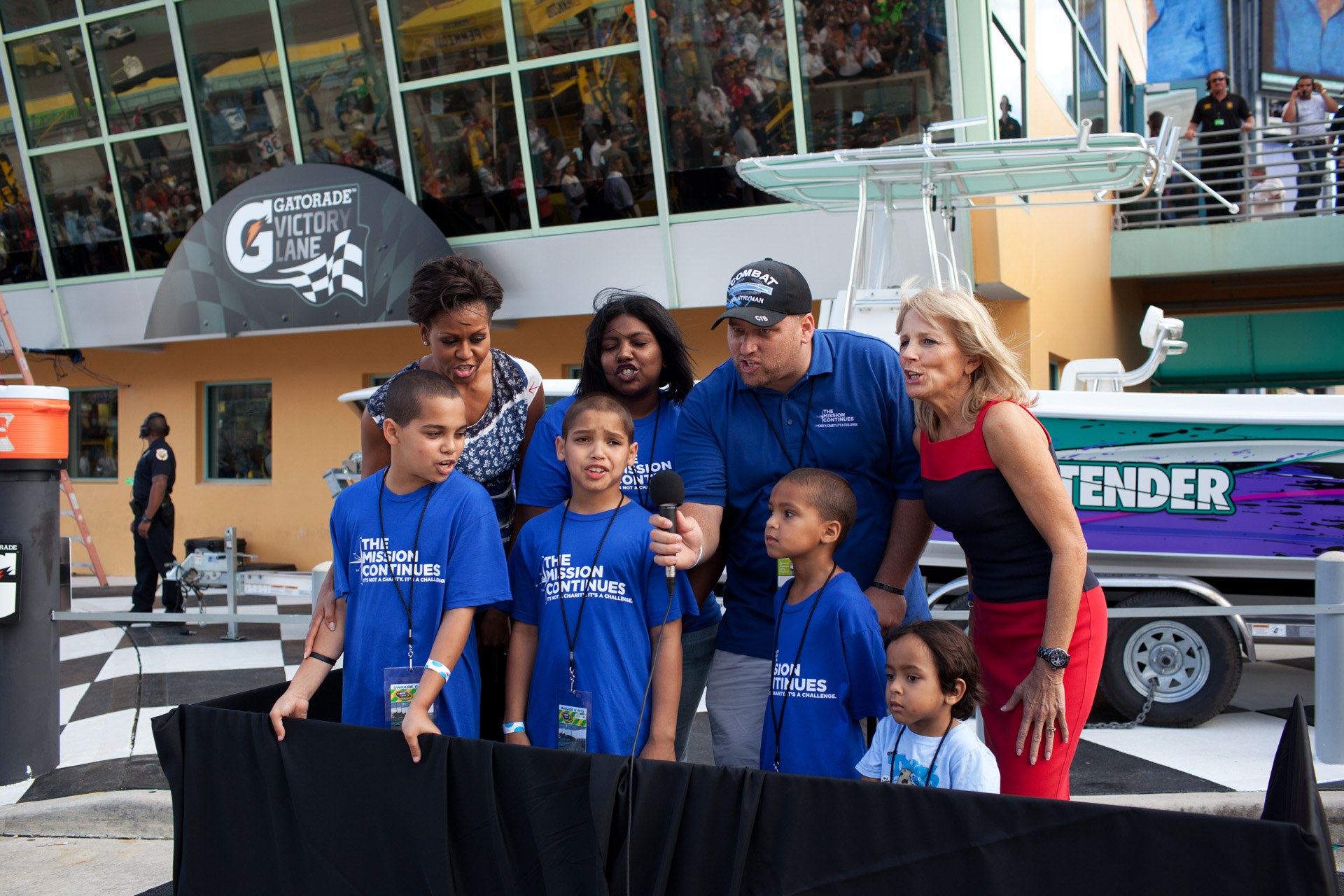 First Lady Michelle Obama and Dr. Jill Biden are joined by the Berry family as they serve as Grand Marshals for the NASCAR Sprint Cup finale, Ford 400 race in Miami, Fla., and offer the most famous words in racing: “Gentlemen, start your engines,” Nov. 20, 2011. (Official White House Photo by Lawrence Jackson)

Yesterday, I had the great privilege of accompanying First Lady Michelle Obama and Dr. Jill Biden to the final NASCAR race of the year -- the Ford 400 in Homestead, Florida.

The day was rich with excitement as the 2011 NASCAR Sprint Cup Champion would be crowned after this race. The stands were packed with tens of thousands of fans there for the "big race."

And it was a very special day for veterans and military families. The Beacon Council, Miami-Dade County's economic development organization, and about a dozen private companies from around this nation, committed to hire 10,000 veterans and military spouses by the end of 2013. The Beacon Council’s commitment is the largest regional commitment to hire our nation’s heroes and their families since the First Lady and Dr. Biden launched Joining Forces earlier this year.

Were that not enough -- NASCAR went "above and beyond" by inviting an incredible 5,000 veterans, service members and their families to attend the race as part of their support for Joining Forces. 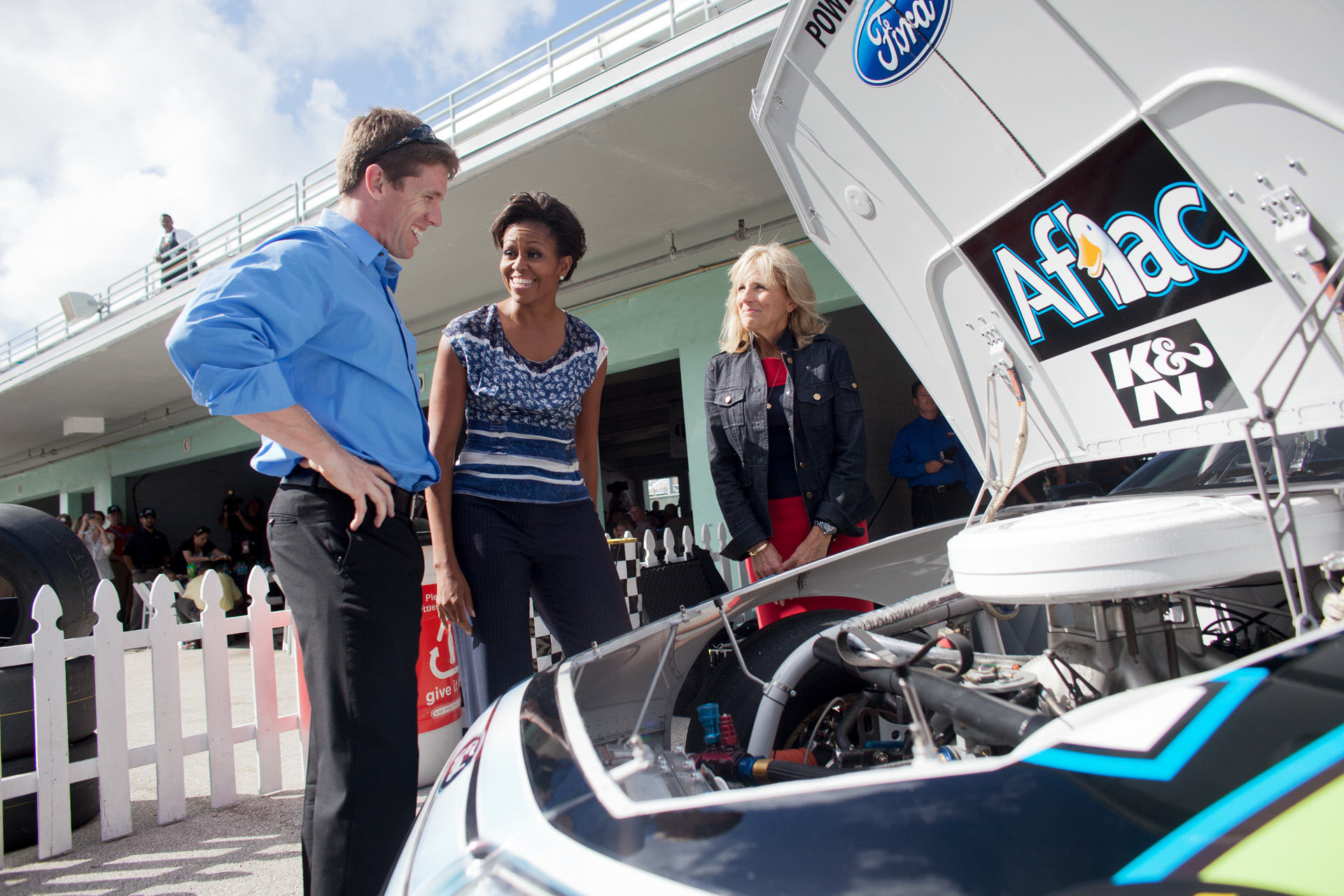 First Lady Michelle Obama and Dr. Jill Biden get a look under the hood of race car driver Carl Edwards' back up car before the start of the Chase for the NASCAR Sprint Cup finale, Ford 400 race in Miami, Florida, Nov. 20, 2011. (Official White House Photo by Lawrence Jackson)

Army Veteran and Wounded Warrior hero Sergeant Andrew Berry, his wife and four children then joined the First Lady and Dr. Biden in kicking off the race as co-Grand Marshalls by shouting the most famous words in racing, "Gentlemen, start your engines."

A flight of F-16’s flying overhead, the American Flag racing around the track, the singing of the “Star Spangled banner” and 60,000+ great Americans in a standing ovation for America’s heroes and their families was as powerful  and positively moving a moment as any I have experienced in my 26 years in the world’s greatest Navy.

Yesterday's event was an example of the commitment made by the First Lady and Dr. Biden that Joining Forces wants to work with any group – anywhere and at any time – that supports our veterans and military families. They will continue to seek out examples of great Americans stepping up for this very special group who have given so much to this country, just like NASCAR did yesterday.

We look forward to working with NASCAR and their great fans as we ALL continue to support our service members, veterans and military families – any place and at any time – in 2012.