Progress and Persistence in Pursuit of Workplace Equality

November 21, 2011 at 6:55 PM ET by Secretary Hilda Solis
Twitter Facebook Email
Summary:
At the National Gay and Lesbian Chamber of Commerce’s annual dinner, Labor Secretary Hilda Solis speaks about the progress this Administration has made for LGBT individuals in the workplace and the challenges that remain. 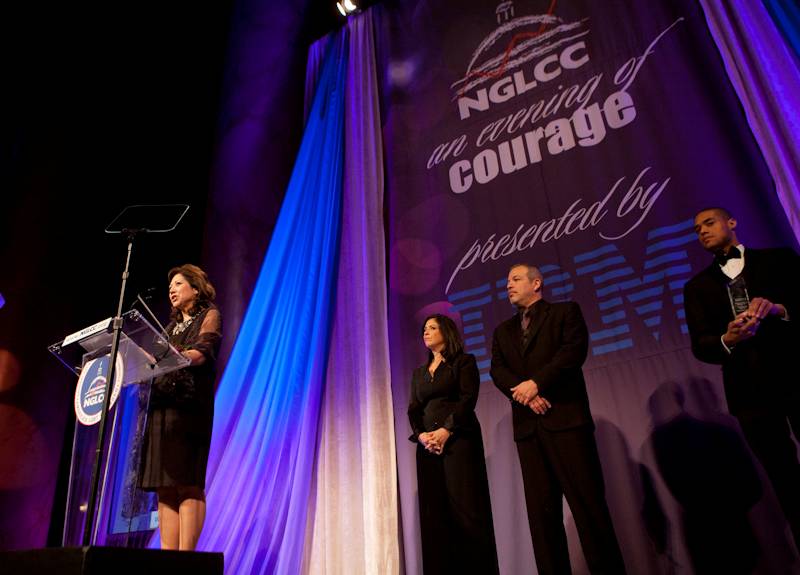 On Friday, I was proud to attend the National Gay and Lesbian Chamber of Commerce’s (NGLCC) annual dinner to talk about this Administration’s commitment to support LGBT entrepreneurs and workers.

I’ve spent the last two decades fighting for equal opportunity for LGBT Americans, so I was honored to receive the NGLCC’s Extra Mile Award. But as I made clear in my speech, it’s our LGBT job creators who should be thanked and supported.

It’s hard to overstate the contributions of the lesbian, gay, bisexual and transgender community to our national economy. Across America, an estimated 1.4 million LGBT-owned businesses are making products, delivering vital services, exporting goods and creating jobs. And LGBT purchasing power is expected to top $800 billion this year.

These numbers demonstrate the LGBT community’s critical role in advancing our economic recovery—and our government’s obligation to promote policies that value their contributions.

I feel fortunate to work in an Administration that believes in workplace equality. As the Secretary of Labor, I see the value that LGBT workers bring to my department every day. They are employed at all levels of my agency, including senior management. And together, we’ve made important strides over the last three years.

Last year, we announced that the Family and Medical Leave Act applies to loving families with two mothers or two fathers. More than 2 million children are being raised in LGBT families today, and our ruling means that LGBT workers get 12 weeks of protected leave to care for their child, even if they can’t legally adopt. If you act like a parent, do the work of a parent and raise a child like a parent, then you are a parent, as far as my agency is concerned.

In April, I issued an order to change my department’s Equal Employment Opportunity policy to add gender identity as a protected category. I did that because it was the right thing to do and because no one should be denied a job or a promotion because of their gender identity or how they choose to express it.

And earlier this year, my department conducted the first-ever national survey on domestic partnership benefits. We surveyed more than 15,000 workplaces to collect data that LGBT advocates can use to make the case for domestic partner benefits with local, state and federal policymakers.

These are important accomplishments, but we all know there is more work to be done.

Congress should pass an inclusive Employment Non-Discrimination Act, because sexual orientation and gender identity have absolutely no relation to one’s ability to excel at their job.

The so-called Defense of Marriage Act should be repealed, so LGBT families have access to the same rights and benefits as their straight counterparts. This is especially important because more than 2 million children are now being raised in households with two mothers or two fathers.

And Congress should stop playing politics and pass the President’s American Jobs Act. The bill would provide tax relief and promote hiring at LGBT businesses. And it would help many who are living with HIV/AIDS by outlawing hiring discrimination against men and women who’ve had long gaps in employment due to health challenges.

I’ll be honest: I’m not the world’s most patient person when it comes to issues of fundamental fairness, but I know that progress is possible if we work together. The recent repeal of “Don’t Ask, Don’t Tell” was a powerful reminder of what can be accomplished when we keep up the pressure and commit to changing hearts and minds—one relative, one friend and one neighbor at a time.

Hilda Solis is the Secretary of the U.S. Department of Labor.