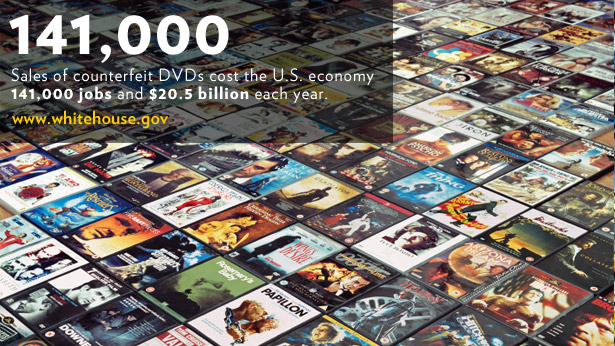 Illegal sales of counterfeit DVDs cost the U.S. economy 141,000 jobs and $20.5 billion each year. Money from the sales of pirated music and movies often helps fuel drug trafficking and gang crime. Together, these facts make theft of intellectual property far from a victimless crime.

Today, the Department of Justice and the National Crime Prevention Council launched a public awareness campaign to make sure people know the facts. Eighty percent of Americans believe it’s illegal to knowingly purchase counterfeit or pirated goods, but do it any way. And nearly 60 percent believe they won’t get caught. The truth is that buying a pirated album or movie doesn’t just hurt stores or movie studios or musicians or actors. It affects everyone involved in the production of that CD or DVD, from the ideas to the production to the processing, including artists, writers, technicians, janitors, caterers, and others.

The campaign launched today targets all types of intellectual property theft, including goods like purses and sunglasses, medications, movies, and music, and aims to raise awareness that buying these items is a serious crime.