Report From The Field: A Broadband Bridge To Puerto Rico

According to NTIA’s National Broadband Map, less than half of Puerto Ricans have access to basic broadband service, which consumers increasingly need to apply for and get a job, access valuable education and healthcare information, and participate in today’s digital economy.

To help fill this gap, NTIA awarded Puerto Rico two Recovery Act grants to expand and enhance broadband infrastructure.  While I was in San Juan earlier this month at the Puerto Rico Chamber of Commerce’s Annual Telecom Conference, I had the opportunity to visit one of these projects.

Critical Hub Networks, which received a $25.6 million grant, is expanding high-speed Internet access in underserved areas of Puerto Rico by establishing a broadband “bridge” to the United States mainland and deploying a high-capacity middle-mile network on the islands. Additionally, Critical Hub will also offer a 25 percent broadband discount to K-12 schools to help improve education and distance learning. 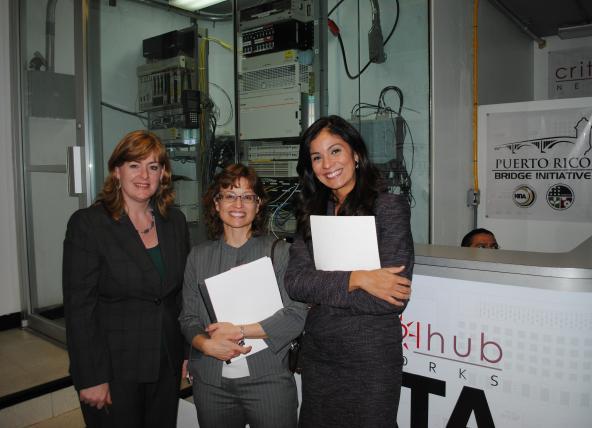 Critical Hub is enabling other local Internet service providers to utilize its open network in order to extend broadband to new customers and better serve existing customers.  In fact, NTIA requires all of our broadband infrastructure grantees to make the networks built with Recovery Act money available to other providers. Critical Hub has entered into peering and interconnection agreements with several providers. With the ever-increasing need for broadband capacity, especially for schools and other community anchor institutions, these interconnection agreements can be instrumental to ensuring citizens share fully in the benefits of broadband – and we look forward to seeing continued collaboration and progress. 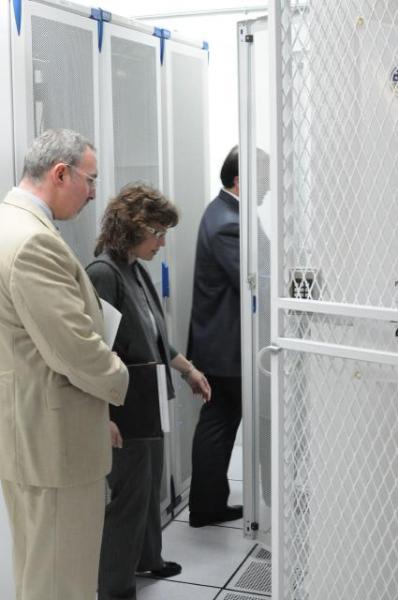 Carlo Marazzi, President of Critical Hub Networks, enters PRBI’s cage facilities in the Data Center while Juan Eugenio Rodríguez, CIO of the Government of Puerto Rico, and Anna Gomez look on. Critical Hub is also currently expanding its facilities in order to accommodate the increase in Internet traffic and to accommodate additional local Internet providers that plan to utilize the network. November 29, 2011. (by National Telecommunications and Information Administration)

Meanwhile the other infrastructure grantee in Puerto Rico, INTECO, which received a  $12.9 million grant, is working to deploy broadband in the Central East Region of Puerto Rico and extend free Wi-Fi hotspots to low-income adults and youth. Together, these two infrastructure projects expect to connect nearly 2,000 community anchor institutions, including more than 1,500 K-12 schools, to high-speed Internet.  I was able to meet with INTECO leadership during the Chamber of Commerce Conference as well. 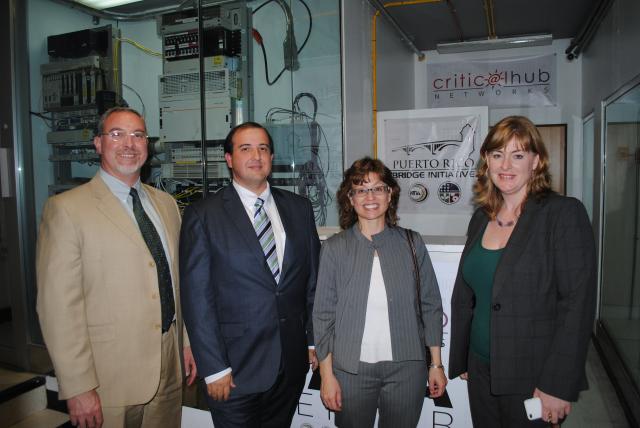 (Note: per the data on our National Broadband Map, less than half of Puerto Ricans have access to broadband service at advertised speeds of 3 mbps download/768 kbps upload, and only a quarter have access to service at 6 mbps advertised download speeds. Through our State Broadband Initiative, the Office of the Governor received a grant to lead data collection and planning efforts in Puerto Rico. You can find more information at connectpr.org.)

Anna M. Gomez is the Deputy Assistant Secretary for Communications and Information.