December 2, 2011 at 9:35 AM ET by Alan Krueger, Alan B. Krueger
Twitter Facebook Email
Summary:
Private sector payrolls increased but we need faster growth to put more Americans back to work

Today’s employment report provides further evidence that the economy is continuing to heal from the worst economic downturn since the Great Depression, but the pace of improvement is still not fast enough given the large job losses from the recession that began in December 2007.

Private sector payrolls increased by 140,000 in November and overall payroll employment rose by 120,000. The unemployment rate fell 0.4 percentage point to 8.6 percent, the lowest unemployment rate since March 2009.  About half of the drop in unemployment in the household survey was due to a decline in the labor force (-315,000) and about half to employment growth (+278,000).  Despite adverse shocks that have created headwinds for economic growth, the economy has added private sector jobs for 21 straight months, for a total of 2.9 million jobs over that period.  Nonetheless, we need faster growth to put more Americans back to work.

While the U.S. economy is healing, the world economy continues to be in a fragile state and all economies are linked through trade and finance.  In this environment, the President’s American Jobs Act is the right medicine to sustain and strengthen the recovery.  In particular, with 13.3 million Americans still unemployed, and 43 percent of them unemployed for 6 months or longer, it would be a setback for the economy and American families if Congress were to allow extended unemployment benefits to expire at the end of the year. The President’s proposal to extend and expand the payroll tax cut for workers and small businesses also would provide a substantial boost to economic growth and job creation.

The monthly employment and unemployment numbers are volatile and employment estimates are subject to substantial revision. Therefore, as the Administration always stresses, it is important not to read too much into any one monthly report. 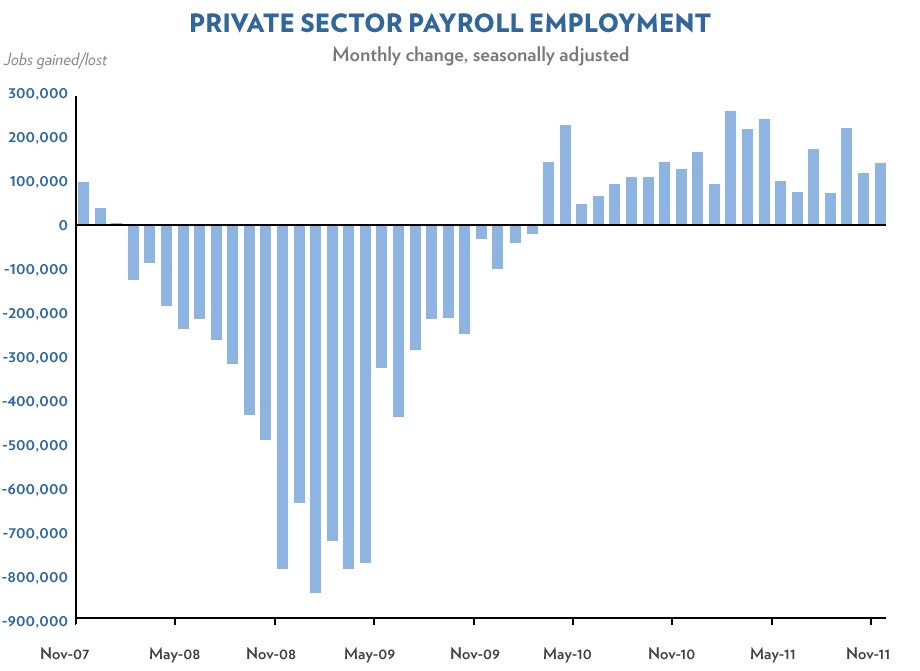