December 13, 2011 at 5:50 PM ET by Melanie Kaye
Twitter Facebook Email
Summary:
The party at the Naval Observatory was held to help children understand the challenges faced by military families during the holiday season. 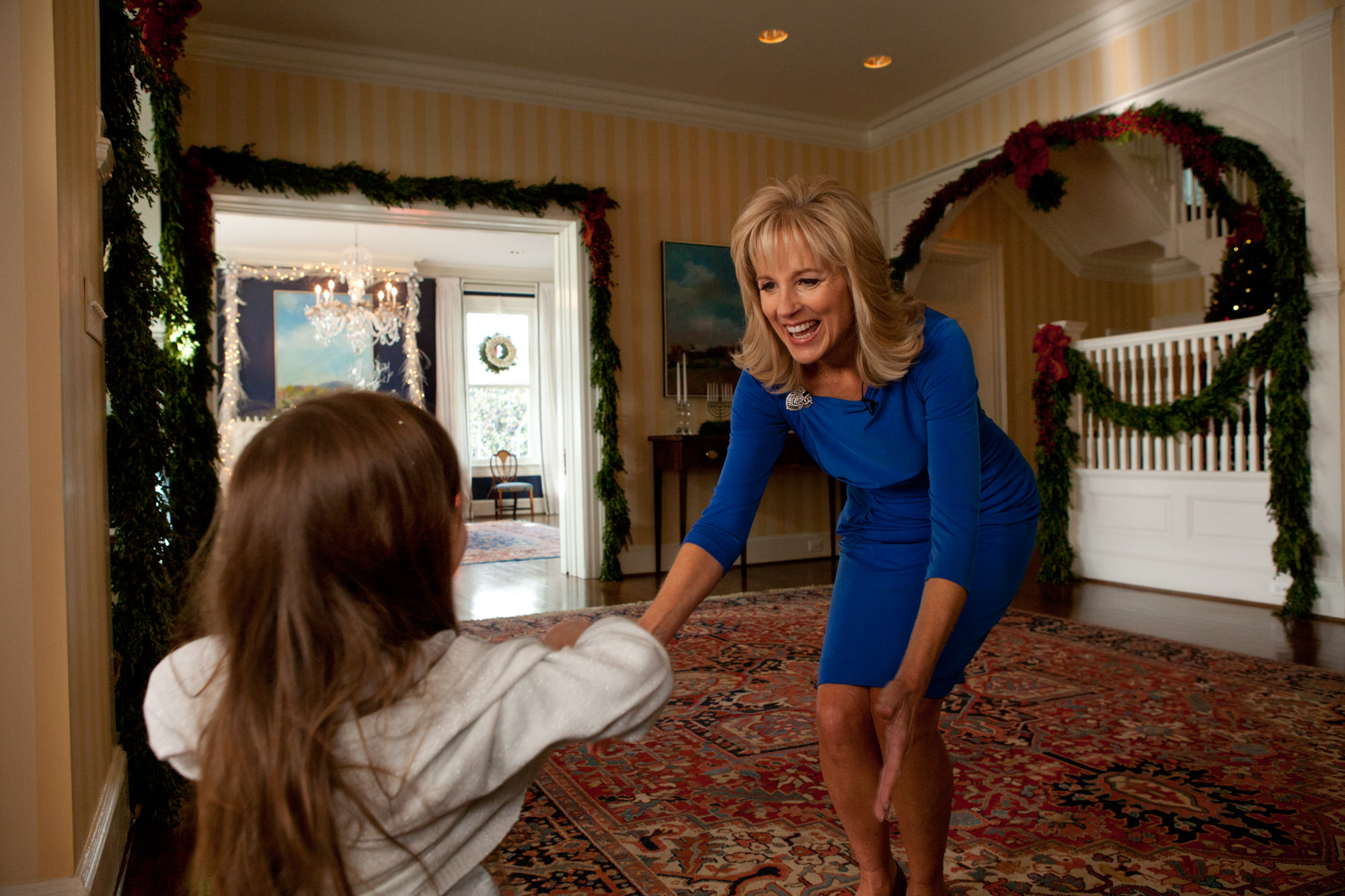 The mood was merry when Dr. Jill Biden hosted a fourth-grade class from White Oaks Elementary School in Burke, Virginia at the Vice President’s Residence on Monday, Dec. 12. The festive event focused on helping children understand the challenges faced by military families during the holiday season.

Dr. Biden talked to students about the importance of supporting classmates whose parents are serving in the military, particularly around the holidays. After describing her own experience as a military mom when her son, Army Major Beau Biden of the Delaware National Guard, was deployed in Iraq for a year, Dr. Biden introduced Army Colonel Rebecca Porter, who talked about the impact deployment has on military families. 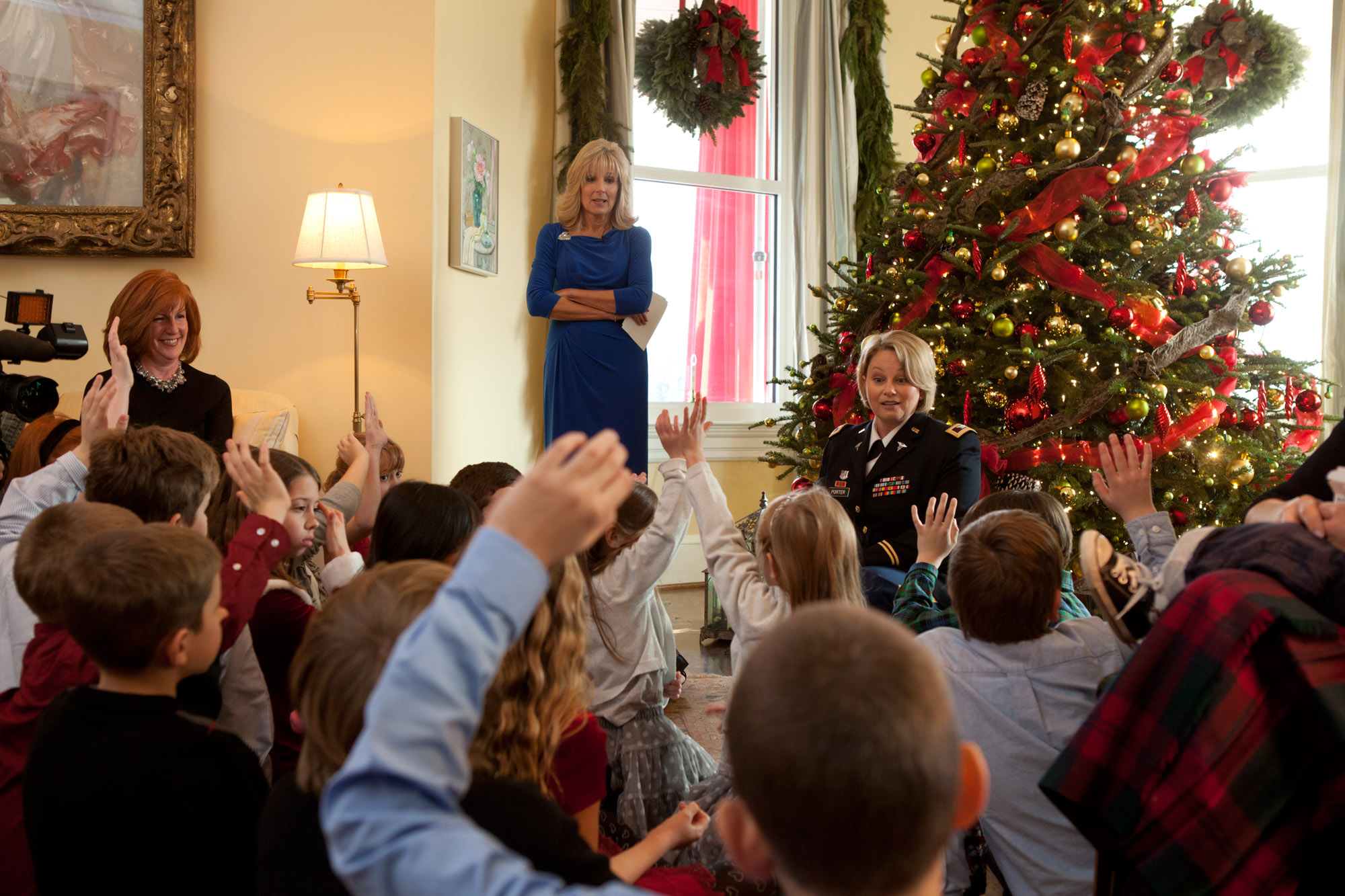 Colonel Rebecca Porter talks to students about what it’s like to have a family member deployed and about what students can do to support military families December 12, 2011. (Official White House Photo by David Lienemann)

The students then moved to the library where they heard from Major James Blain – the father of classmate Jimmy Blain – who is currently deployed in Afghanistan. Working with a program called United Through Reading, Major Blain read Mickey’s Christmas Carol to the class, via a pre-recorded DVD. Major Blain’s wife, Tina, brought their other three children – Josephine, Anna Mae and Matthew – to the event. Mrs Blaine said the recordings created through United Through Reading were an important way for families to stay in touch during deployments. When Major Blain appeared on screen, Matthew immediately called out, “Daddy! Daddy!” 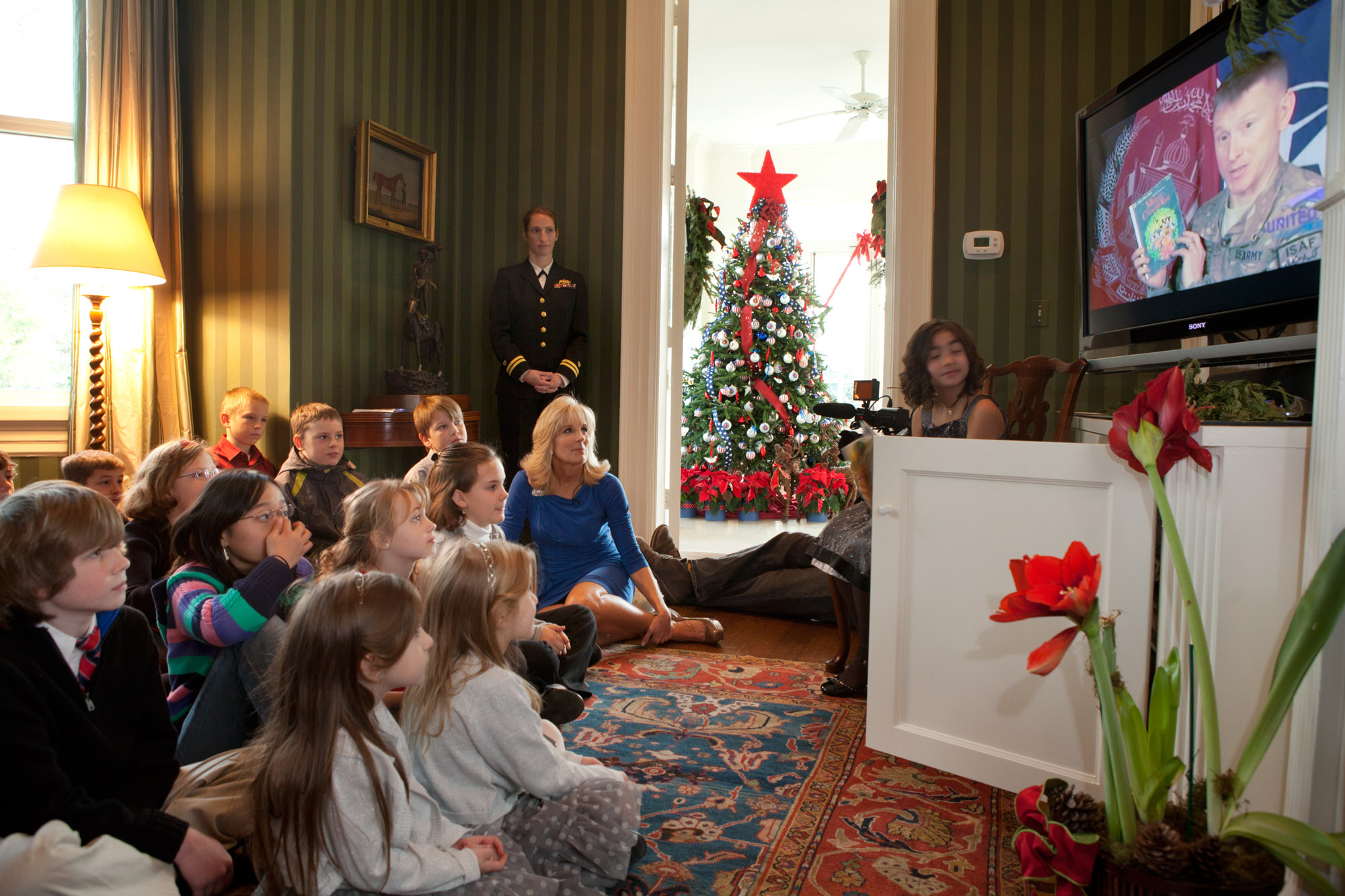 As part of its support for First Lady Michelle Obama and Dr. Biden’s Joining Forces Initiative, United Through Reading last week announced a pledge to double its commitment to U.S. Army and National Guard families in the next two years.

After the story, students made cards for military service members and enjoyed a surprise visit from Santa. 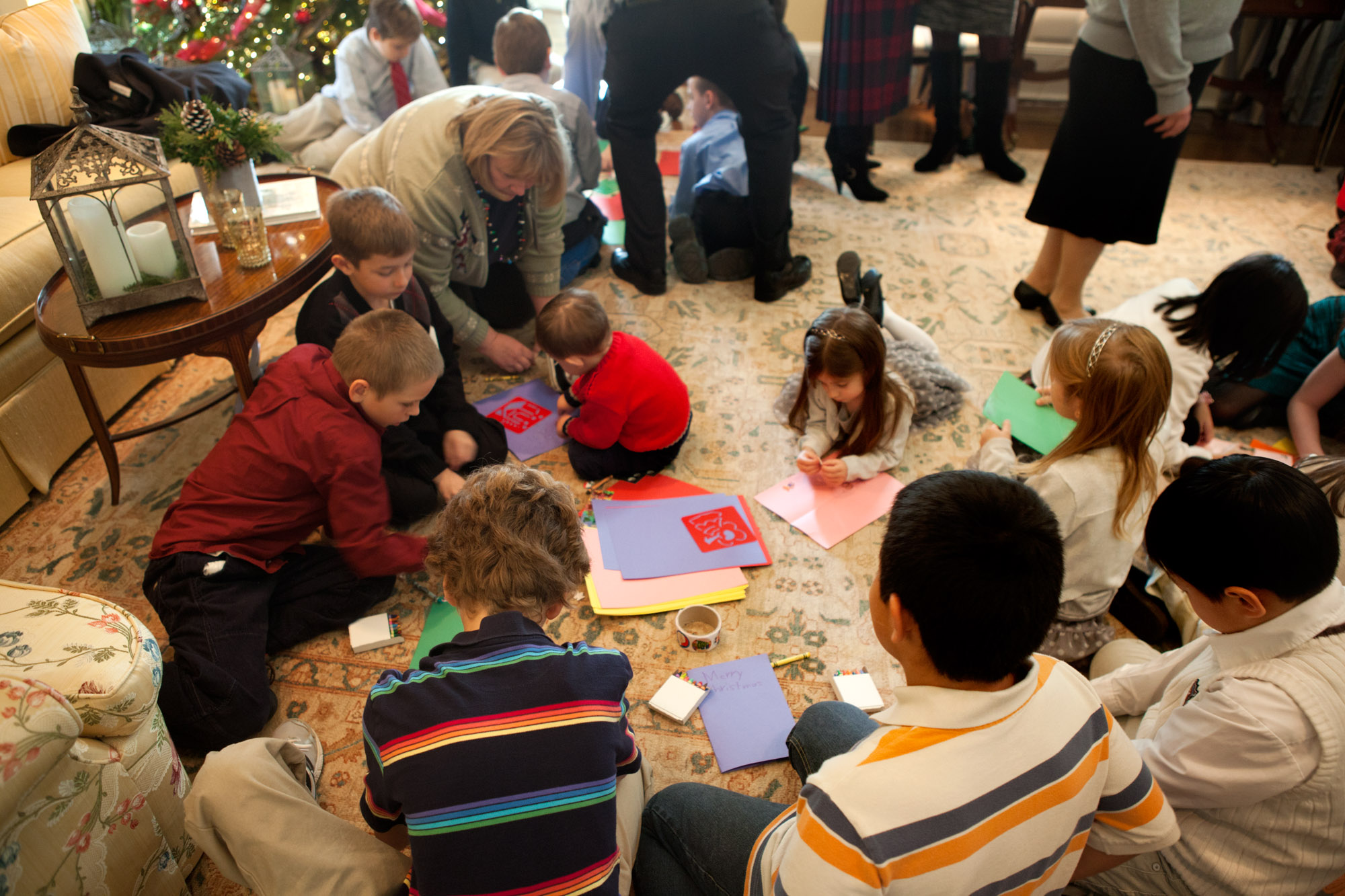 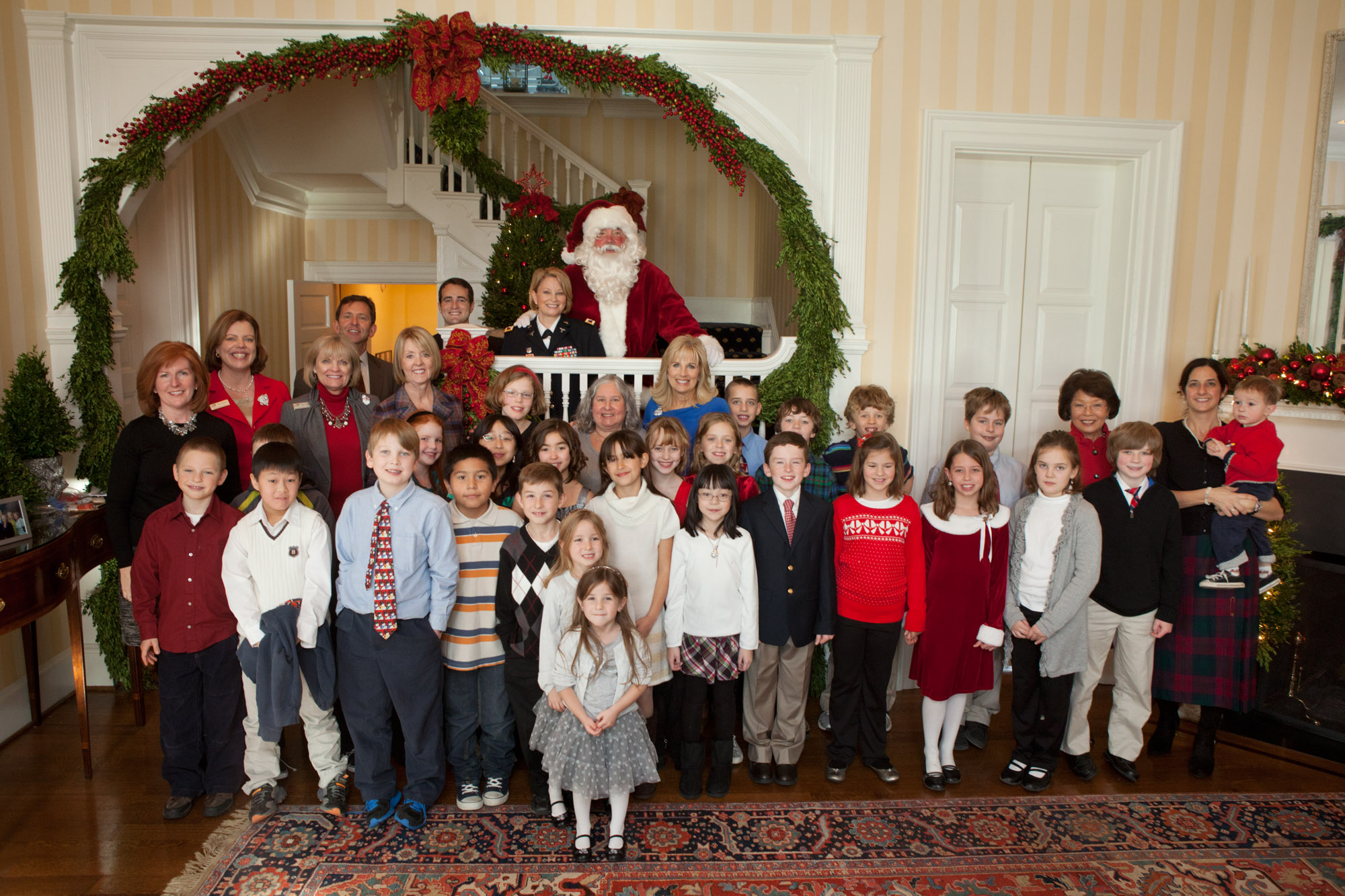