December 14, 2011 at 10:00 AM ET by Rafael Lemaitre
Twitter Facebook Email
Summary:
Rafael Lemaitre discusses new data from the 2011 Monitoring the Future survey, which reports that one in nine high school seniors had used synthetic marijuana in the past year.

So what do we know about these synthetic drugs?

First, they’re dangerous.  Poison Control Centers operating across the Nation have reported over 5,500 calls relating to synthetic marijuana as of October 31 of this year.  That’s almost double the number received in all of 2010. We also know that state and local public health departments note that these drugs cause serious adverse health effects, including agitation, anxiety, nausea, vomiting, tachycardia (fast, racing heartbeat), elevated blood pressure, tremor, seizures, hallucinations, and paranoid behavior. 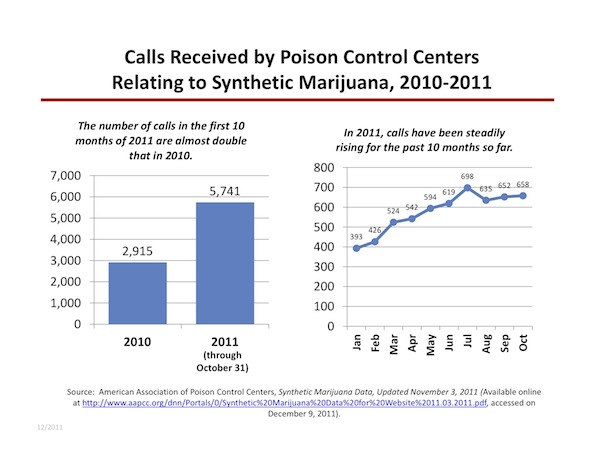 Making matters worse, these drugs are often marketed as “legal” substances.  They are sometimes labeled as “herbal incense” and sold in small pouches or packets over the Internet, in tobacco and smoke shops, drug paraphernalia shops, gas stations, and convenience stores.

There’s still a lot we do not know about these drugs, but here’s what we do know:  We must all work together to respond to this emerging threat.  The good news is that over the past year, the Federal Government has taken comprehensive action to address this challenge:

We will continue to address this threat.  But parents, too, must take action.  Parents are the most powerful force in the lives of their teens.  That is why we ask that all of you take time today to talk to your teens about the serious consequences of using marijuana – in whatever form it may come, including synthetic forms like K2 and Spice.