By the Numbers: 1.5 Million 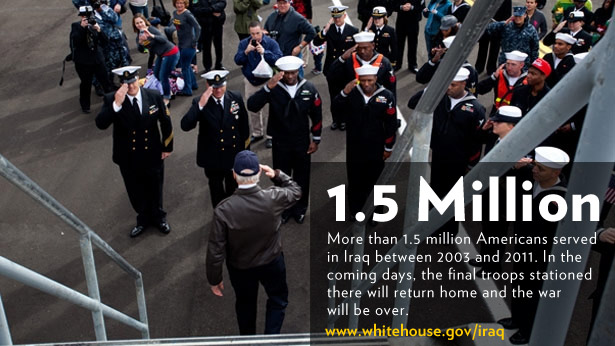 More than 1.5 million Americans have served in Iraq between 2003 and 2011. More than 30,000 troops were wounded in the fighting, and 4,500 lost their lives. As the war draws to a close in the coming days, we thank every one of them for their service, their sacrifice, and everything they've done to help end the war.

Today at Fort Bragg, President Obama said that these numbers don’t come close to telling the full story of the Iraq war.

Our civilians have represented our country with skill and bravery.  Our troops have served tour after tour of duty, with precious little dwell time in between.  Our Guard and Reserve units stepped up with unprecedented service.  You’ve endured dangerous foot patrols and you’ve endured the pain of seeing your friends and comrades fall.  You’ve had to be more than soldiers, sailors, airmen, Marines and Coast Guardsmen –- you’ve also had to be diplomats and development workers and trainers and peacemakers.  Through all this, you have shown why the United States military is the finest fighting force in the history of the world.

The President has pledged to stand by the service members that have fought so hard once they come home, and will make sure they get all the care and benefits they’ve earned.

After years of rebuilding in Iraq, we want to enlist our veterans in the work of rebuilding America, President Obama said today, which is why we’ve committed to doing everything we can to extend opportunities to those who have served. This commitment includes the Post-9/11 GI Bill that will help service members and their families get a college education. It includes launching a nationwide effort to connect veterans with companies that want to hire them, and offering tax credits as incentives for businesses to make those hires.

Take a minute to write a note that troops all over the world will see. Thank them for their service and sacrifice, and let them know as they return home that you’ll stand by them, too.