TIGER Projects Remind Us What America Can Do 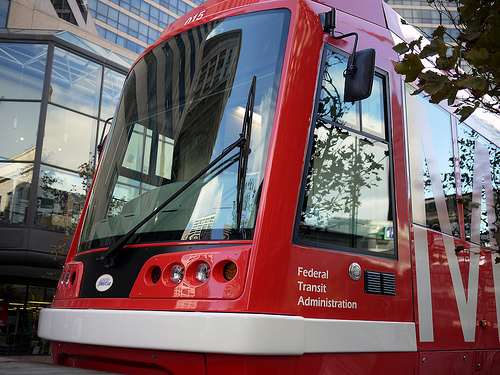 This week, the Department of Transportation continued its TIGER grant program, sending $511 million to 46 transportation projects in 33 states. Already the response has been tremendous.

At City Halls in Philadelphia and Cincinnati, and on the phone with major and local media outlets across the country, folks seem excited about the benefits these projects will provide and the jobs they'll create. I expect even more enthusiasm in Chicago shortly.

In the historic Philadelphia City Hall's Reception Room, I was happy to share with Mayor Michael Nutter and others the news of a $10 million grant for the city's IMPaCT project. This award will help pay for upgrades to 100 traffic lights and connect these controllers to the city’s traffic management system through fiber optic cable. The project includes technology to extend green lights for buses and trolleys when they need more time to get through an intersection. The money will also support upgrades to handicapped ramps and pedestrian countdown signals at crosswalks.

When completed, this $32 million program will improve traffic flow for transit vehicles, synchronize signals to keep motorists moving, and increase safety for pedestrians and people with disabilities. That sounds like a big win for all Philadelphians.

In Cincinnati, I joined Mayor Mark Mallory to announce a $10.9 million grant to build the Riverfront Streetcar loop.  This is the second route in the works for the Cincinnati Streetcar, and it will connect to the Downtown Circulator route already in design.

All of the 46 projects represent the Obama Administration’s commitment to get grants out the door quickly so we can get projects started and workers back on jobsites rebuilding the transportation systems that American families and businesses rely on.

Even still, the American people are counting on us to do more.

And America needs the transportation provisions in the American Jobs Act, which provides an immediate investment in construction jobs upgrading 150,000 miles of road; laying and maintaining 4,000 miles of train tracks; restoring 150 miles of runways; and putting in place a next-generation air traffic control system that reduces travel times and delays.

These steps require action from Congress, so I hope our elected officials in Washington can learn a thing or two from today's TIGER recipients about overcoming adversity and coming together to solve problems.

We are not a nation that just talks about building big things only to get mired in the smallness of politics. TIGER reminds us that we’re better than that. We can put our friends and neighbors back to work, and we can make our nation’s transportation system once again the envy of the world.