By the Numbers: 22 Months

January 6, 2012 at 11:29 AM ET by Megan Slack
Twitter Facebook Email
Summary:
The economy has added private sector jobs for 22 straight months, but we need even faster growth to put Americans back to work. 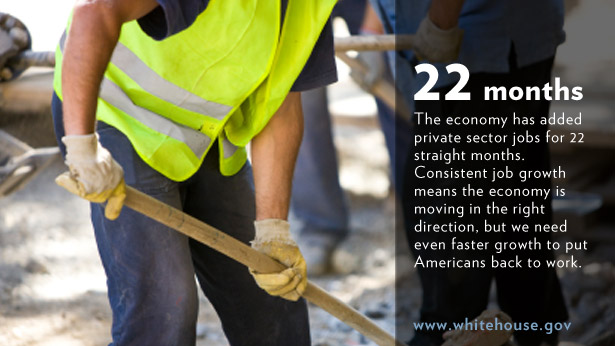 Ed. note: Today, at 3:00 p.m. EST, Brian Deese, Deputy Director of the National Economic Council, will hold a special session of "Office Hours" on Twitter moderated by Yahoo! Finance. Ask your questions about jobs and the economy now and during the live event on Twitter with the hashtag #WHChat.

Today’s employment report shows that private sector payrolls increased by 212,000 in December and the unemployment rate fell to 8.5 percent. After losing more than 8 million jobs in the recession, the economy has added private sector jobs for 22 straight months.

In those 22 months, the economy added 3.2 million jobs. In the last 12 months alone, the economy added 1.9 million private sector jobs, more than in any year since 2005.  Nonetheless, we need faster growth to put even more Americans back to work.

The fact is, our economic problems weren’t created overnight, and they won’t be solved overnight. The President will continue to look for every opportunity to work with Congress to move this country forward and create jobs. And he’ll continue to take steps to rebuild an economy where hard work and responsibility pay off, and everybody has a chance to succeed.

Most importantly, Congress needs to extend the middle class payroll tax cut and pass other pieces of the American Jobs Act.  It’s time to get to work and pass the bipartisan pieces like putting construction workers back on the job rebuilding our roads and bridges, keeping teachers in the classrooms and cops and firefighters on the streets.