A Resurgent America on Display at the 2012 Detroit Auto Show

Detroit is sacred ground for any transportation fan. It's the birthplace of the automobile, and of the freeway.  A century ago, Woodward Avenue was the first street paved with concrete anywhere in the world.  And every year, at the North American International Auto Show in Detroit, the world's automakers roll out their best new models and designs.

The Detroit Auto Show always offers an impressive display of innovation. But, when I attended in 2010, the atmosphere was subdued.  A palpable cloud of economic uncertainty hung over the auto industry then.  This year, however, the show has a different buzz.  Today when I toured the exhibits, people were gathered not only to see the latest prototypes, but to celebrate the resurgence of the American auto industry.

The Motor City is back in business.  And for that I am happy to extend my gratitude and my congratulations to President Obama. 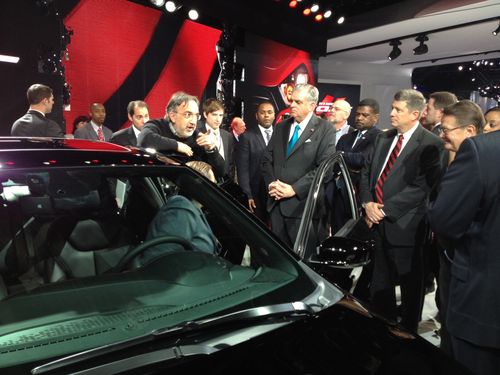 When President Obama took office, America was staring down the worst recession since the Great Depression, a recession that hit our auto industry particularly hard.  During the year before the President’s inauguration, this industry lost more than 400,000 jobs. Two great American companies -- Chrysler and GM -- stood on the brink of liquidation.  President Obama had two choices: He could do nothing, or he could take action.

Had this Administration sat on our hands, a bad recession could have become an even worse depression. Right away, 1 million people would have been put out of work.  America’s manufacturing sector would have spiraled into freefall.

Instead, President Obama said that if GM and Chrysler were willing to take the difficult steps of restructuring and making themselves more competitive, the American people would stand by them.

Now, America’s auto industry has reinvented itself for the 21st century.  As we learned on Friday, America’s manufacturing sector has spearheaded our economic recovery, adding jobs in both 2010 and 2011.  Until last year, the U.S. hadn’t added manufacturing jobs since 1997.

These are American workers, applying American know-how to build some of the best cars in the world.

So, as you read about, or see firsthand, the breathtaking new vehicles at the 2012 Auto Show, remember that they represent more than just four wheels and an engine.  They represent American factories bustling and humming; American workers churning out cars; and American families once again earning paychecks.

They represent another example of what happens when we lend each other a hand and refuse to sit idly by while Americans lose their jobs.

Yes, we're still feeling the sting of a very tough economy.  Our economic problems weren’t created overnight, and they won’t be solved overnight.

But on display in Detroit this week is more than just an impressive new fleet of cars and trucks; it's a vision of what’s still possible in Detroit, in Michigan, and in America.

Secretary Ray LaHood is the U.S. Secretary of Transportation