Everything You Need to Know About Insourcing 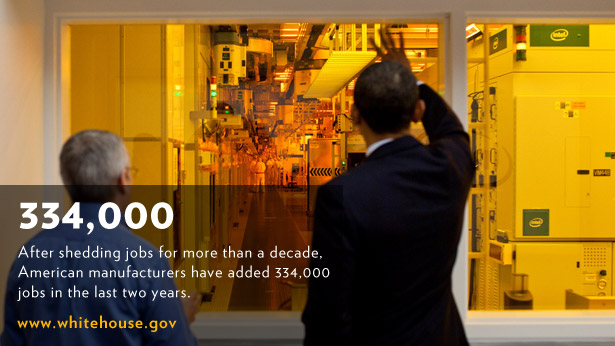 After decades of watching American companies take jobs to other countries, we're beginning to see entrepreneurs and manufactures make the decision to keep factories and production facilities here in the United States—or even bring jobs back to the U.S. from overseas.

How do we know this is happening?

For the past 22 months, the private sector has been hiring—to the tune of 3.2 million jobs. In 2011 alone, we saw private companies bring on almost 2 million new workers, more than in any year since 2005.

That's good news, even if we still have a lot of ground to make up. And if you dive into the numbers (like those compiled in this new White House report), you'll notice something interesting:

Each of those facts is evidence of a growing trend of insourcing.

In addition to the broad trends, we’ve seen a slew of concrete examples of insourcing.

In recent months, large manufacturers like Ford and Caterpillar have announced large investments in U.S. facilities. In years past, these sorts of expansions have been aimed at facilities in Mexico, China, or Japan.

In 2010, KEEN, the footwear designer, opened a 15,000-square-foot facility to manufacture boots in Portland, Oregon—moving production from China to a location just five miles from its corporate headquarters. The company also makes bags in California and socks in North Carolina. After watching costs rise in its Chinese factories, Master Lock began bringing production back to Milwaukee—the same place where the company was founded in 1921.

And it’s not just manufacturers. Service firms ranging from customer support centers to software developers to engineers are deciding to invest in the U.S. for their operations. Even foreign-domiciled firms are making the decision to take advantage of American productivity and innovation. Siemens, for example, spends nearly $50 million each year training its U.S. workforce, and ThyssenKrupp spent nearly $5 billion on its new steel and stainless steel manufacturing and processing plant in Alabama. Investments from companies like these reached $228 billion in 2010, an increase from $153 billion in 2009.

The cost of manufacturing in the U.S. is improving in relation to other countries.

We know labor costs are lower in places like China, but in many cases, costs in those countries are going up. At the same time, American workers, who have always been more productive than those in other countries, are becoming even more efficient.In the first quarter of 2009 alone, productivity rose nearly 13 percent.

According to the Bureau of Labor Statistics, between 2002 and 2010, only one of 19 other industrialized countries managed to improve its unit labor cost position in manufacturing more than the United States.

Manufacturers based in the U.S. have also been able to take advantage of a boom in domestic energy production. We’ve seen a surge in American natural gas production, which has lowered energy costs, reduced pollution, and driven investment in the industries that supply equipment to the natural gas sector and those that use natural gas to fuel production—all of which have helped firms make the decision to keep jobs in the U.S.

As economies in other nations grow, there’s more demand for U.S. engineers, software developers, researchers, and consultants. At the same time, a range of barriers that once made it hard to market those services across borders have come down. As a result, the United States is poised to expand its trade surplus in services to $146 billion in 2010. Since 2003, that surplus has nearly tripled.

What can we do to encourage it?

If we want to encourage insourcing, there are four things the federal government needs to do:

The goal of today’s insourcing forum at the White House is to begin the discussion necessary to accomplish all four of those goals.

In the coming weeks, President Obama will put forward new tax proposals to reward companies that choose to invest or bring back jobs to the United States and to eliminate tax advantages for companies moving jobs overseas.

To learn more about things that President Obama has already proposed to support insourcing, check out the fact sheet.

Or, join the conversation on Twitter. Folks are tweeting about insourcing using #insourcing.