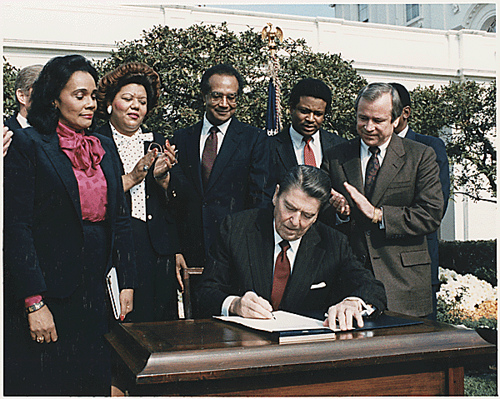 Martin Luther King, Jr. Day, celebrated on the third Monday of January each year, marks the birthday of the civil rights leader and nonviolent activist. The call for a national holiday to honor Dr. King’s legacy began soon after his assassination in 1968—U.S. Rep. John Conyers (D-MI) introduced legislation to establish the holiday just four days after Dr. King was killed, but Congress took no action on the bill.

In the years that followed, millions of people signed petitions in support of the holiday. Coretta Scott King testified before Congress multiple times, calling for a federally recognized day to honor the life and work of her late husband. In 1980, Stevie Wonder released a song, “Happy Birthday,” which became both a hit and a rallying cry for supporters of the holiday, and civil rights marches in Washington in 1982 and 1983 only served to amplify their mission.

A bill to establish the holiday successfully passed through both houses of Congress in 1983, and President Reagan signed it into law on November 20 of that year. The first Martin Luther King, Jr. Day was celebrated in 1986.

The First and Second Families, numerous members of the President’s cabinet, and thousands of other Americans across the country have committed to serve, and you can, too. Visit MLKDay.gov to find a service opportunity in your neighborhood and learn more about the Martin Luther King Day of Service.