Earlier today, the President sent to Congress his budget for the 2013 fiscal year. This year’s budget reflects the President’s firm belief that our country has always done best when everyone gets a fair shot, everyone does their fair share, and everyone plays by the same rules. It’s a document built around the recognition that this is a make or break moment for the middle class and those trying to reach it. What’s at stake is the very survival of the basic American promise that if you work hard, you can do well enough to raise a family, own a home, and put a little away for retirement.

The Budget continues our commitment to keeping that promise alive by creating an economy that’s built to last – with good jobs that pay well and security for the middle class.

It’s a commitment that starts with jumpstarting job creation so that our economic recovery quickens and more Americans are able to get back to work. The Budget proposes more than $350 billion in short-term measures for job growth starting this year. These proposals include the extension of the payroll tax cut and unemployment insurance benefits for rest of 2012; an upfront investment of $50 billion from the surface transportation reauthorization bill for roads, rails, and runways to create thousands of quality jobs in the short term; continuing to allow businesses to write-off the full amount of new investments; and $30 billion to modernize at least 35,000 schools, and $30 billion to help states and localities retain and hire teachers and first responders.

Building an economy that is built to last also requires that we transform our economy from one focused on speculating, spending, and borrowing to one constructed on the solid foundation of educating, innovating, and building. We need to make America the place with the highest-skilled, highest-educated workers; the most advanced transportation and communications networks; and cutting-edge research that will lead to the innovations and industries of tomorrow.  To get us there, the Budget targets resources to the areas critical to growing the economy and restoring middle-class security: education and skills for American workers, innovation and research and development, clean energy, and infrastructure.

It begins with giving our students and workers the education and training they need to take the jobs of today and tomorrow. The Budget includes $850 million for Race to the Top, and $300 million in new resources to improve child care quality and prepare children for success in school. It makes college more affordable and helps achieve the President’s goal of the U.S. leading the world in college graduates by 2020 by sustaining maximum Pell Grant award; prevents student loan rates from doubling this summer; doubles the number of work-study jobs over next five years; makes permanent the American Opportunity Tax Credit; and creates news incentives for colleges to keep tuition rates under control. The Budget also supports State and community college partnerships with businesses to build the skills of American workers, and creates a Pathways Back to Work Fund, which will support summer and year-round jobs for low-income youth, and will help connect the long-term unemployed and low-income adults to subsidized employment and work-based training opportunities.

The Budget also invests in American innovation -- especially clean energy -- and manufacturing to create good jobs and more goods stamped “Made in America.”  For example, it includes more than $140 billion for R&D overall (including $2.2 billion for advanced manufacturing R&D), increases the level of investment in non-defense R&D by 5 percent from the 2012 level even as overall budgets decline, and maintains the President’s commitment to doubling the budgets of three key basic research agencies – the National Science Foundation, Department of Energy’s Office of Science, and National Institute of Standards and Technology Laboratories. Also included are proposals to support the President’s goal of doubling share of electricity from clean energy sources by 2035 and reducing buildings’ energy use by 20 percent by 2020.

To create thousands of jobs and modernize a critical foundation of our economic growth, the Budget also invests in a 21st century infrastructure. These investments include a six-year, $476 billion surface transportation reauthorization bill that’s expanded to included inter-city passenger rail, and that is fully paid for through current user-financed mechanisms and savings from ending the war in Iraq and winding down operations in Afghanistan. They also include the creation of a National Infrastructure Bank to fund projects of national importance, and the building of a next-generation, wireless broadband network.

Of course, even as we invest in the areas critical to creating an economy that’s built to last, we also have to reduce our deficit and bring down the debt. That’s why the Budget lives within very tight spending caps that reduce discretionary spending by $1 trillion over the next 10 years and, including that amount, has more than $4 trillion of balanced deficit reduction. In fact, discretionary spending in this Budget is reduced from 8.7 percent of GDP in 2011 to 5.0 percent in 2022. And by 2018, we cut the deficit to less than 3 percent of GDP, and stabilize the debt-to-GDP ratio. For every $1 in new revenue from those making more than $250,000 per year and from closing corporate loopholes, the Budget has $2.50 in spending cuts including the deficit reduction enacted over the last year.

Achieving this type of deficit reduction in a balanced way requires asking all American to shoulder their fair share of the burden – and that’s what this Budget does. 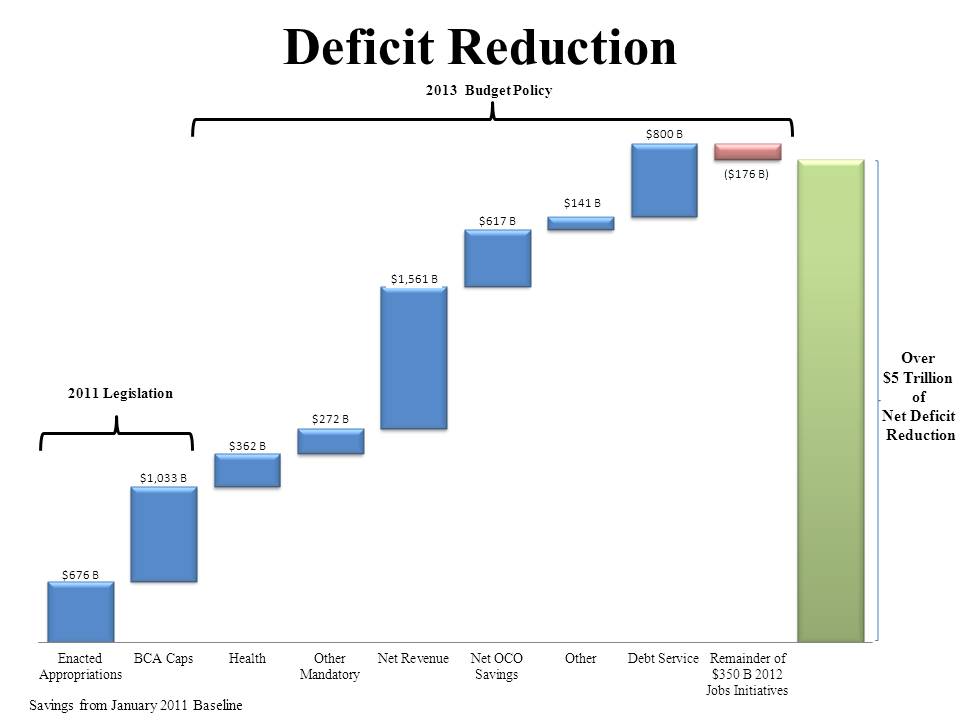 For example, the Budget calls for tax reform that cuts the deficit by $1.5 trillion, including the expiration of the high-income 2001 and 2003 tax cuts; eliminates inefficient and unfair tax breaks for millionaires while making all tax breaks at least as good for the middle class as for the wealthy; and observes the Buffett Rule that no household making more than $1 million a year pays less than 30 percent of their income in taxes. It also calls on the largest financial institutions to fully compensate taxpayers for their extraordinary support by continuing to support a $61 billion Financial Crisis Responsibility Fee, which will offset cost of TARP and the President’s mortgage refinancing program.

The Budget implements the new defense strategy to spend $487 billion less in the Department of Defense’s base budget than was planned in last year’s Budget. This will bring the overall defense budget, including overseas contingency operations, 5 percent below last year’s enacted level.

We’ve also identified areas of the Budget to eliminate wasteful spending or improve efficiency. In fact, the Budget proposes scores of cuts and consolidations across the Federal government, including more than $7.5 billion in administrative savings. Beyond these cuts, the Budget creates more than $360 billion in savings to Medicare, Medicaid, and other health programs over 10 years to make these programs more effective and efficient and move our health system to one that rewards high-quality medicine. And it also saves $270 billion in non-health mandatory spending through reforms in areas like agriculture, federal civilian worker retirement, and the PBGC.

These deficit-reduction measures, paired with critical investments in priorities like education, innovation, and infrastructure, serve as a blueprint for building an economy where hard work pays off and responsibility is rewarded. And in the weeks and months ahead, the Administration stands ready to partner with both sides of Capitol Hill to put this blueprint to work.