February 13, 2012 at 11:31 AM ET by Brad Cooper
Twitter Facebook Email
Summary:
A Boise-based billboard company has put up 32 billboards in Idaho to raise awareness about veteran unemployment 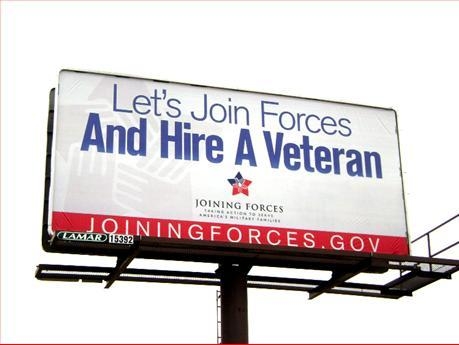 Driving down the interstate in Idaho, you may be surprised by the new billboards you pass. Instead of being greeted by ads for fast-food restaurants and chain hotels, billboards that encourage the hiring of veterans grace the sides of the road.

“Let’s Join Forces And Hire A Veteran,” the signs proclaim. This call to action comes from Lamar Advertising, a Boise-based billboard company that has put up 32 billboards in Idaho to get the word out about hiring our nation’s veterans. These huge billboards encourage Americans to view veterans as assets and to give them the chance to demonstrate their skills and talents through meaningful employment.

Lamar has teamed with Joining Forces in this public service campaign. Efforts like Lamar’s are helping to answer the President’s call to hire and/or train 100,000 veterans or their spouses by the end of 2013, a goal which we are moving closer toward every day.

This donation from Lamar Advertising is exactly what the First Lady had in mind when she launched Joining Forces with Dr. Jill Biden, asking every American to do what they do best in support of our veterans and their families. Lamar is taking on that challenge. A leading advertising firm that specializes in billboard ads, Lamar is making a difference in Idaho by raising awareness of veteran unemployment. This awareness will ultimately lead to jobs for men and women who have taken an oath to protect and defend our country. Today, only 1 percent of Americans serve our nation as military members, taking care of the other 99 percent of citizens. With companies like Lamar, we are supporting those who support us.