Maximizing our Return on IT

From the President’s first days in office, this Administration has been committed to leveraging information technology (IT) to deliver the American people a more efficient and effective 21st Century government. We know that IT has the power to fundamentally transform the way government does business and the way we deliver services for to the American people.  In these tight budgetary times, we also know that we need to make IT investments in a fiscally responsible way. The technology spending proposed in the President’s Budget for Fiscal Year (FY) 2013 -- and during every year of this Administration -- reflects that recognition.

This week, we released the details of the FY 2013 IT Budget request totaling $78.8 billion. This is a 0.75 percent decrease from the FY 2012 enacted level of $79.4 billion – and is noteworthy given the historical growth of Government IT spending. In fact, from FY 2001 through FY 2009, IT spending nearly doubled, growing at an annual rate of 7 percent. 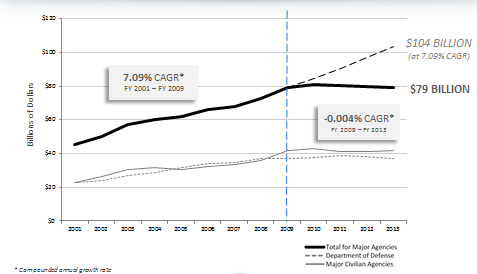 During this Administration, we have flattened this rate of spending and are spending less on IT today than we were in 2008, even after adjusting for inflation.  We are seizing on the power of 21st century technology to consolidate data centers; move to lightweight, shareable technologies, such as cloud computing, while also directing agencies to consolidate commodity IT services; and shift to shared services. For example, the Department of Defense (DOD) is saving up to $300 million in FY 2013 from the closure of 100 data centers and the President’s Budget proposes close to a $1 billion decrease in their IT budget.

Of course, these reductions aren’t just about ensuring discipline in IT spending, as critical as that is. They’re about leveraging new and emerging technologies to cut costs while at the same time improving the way government does business. It’s not enough for agencies to just cut waste and duplication – they have to invest in new technologies that will fundamentally improve the way the Federal government delivers services to the American people.

Over the last three years, the Federal Government has made great progress through IT in innovation, transparency, efficiency, and effectiveness. Web based platforms like Data.gov, the IT Dashboard, and USASpending.gov have revolutionized transparency in government data and spending, the Administration established the Federal Risk Authorization Management Program (FedRAMP) to accelerate the adoption of innovative cloud based services and the Department of Commerce and Small Business Administration’s planned launch of an online platform, BusinessUSA will streamline small business interaction with the Federal Government.  We are also investing in productivity gaining initiatives in FY13 by leading Government-wide strategies for shared services, mobile technology, and web services. We are maximizing our investment in IT and seeing strong returns both in the form of savings and improved services.

The President’s FY13 budget also includes a continued focus on cyber security. If enacted, we will see a great increase in our capabilities around continuous monitoring – watching the network across the Federal footprint for threats. We will also be connecting the dots between on-premise systems and cloud-based systems. This investment in conjunction with FedRAMP security controls will allow us to monitor the whole of government infrastructure.

We are also making cyber security a cross-agency, cross-government priority goal this year. We have done a good job in ramping up on cyber capabilities agency-by-agency, and as we come together around this goal, we will hold the whole of government accountable for cyber capabilities and examine threats in a holistic way.

The Administration will continue to drive our IT efforts through expanded TechStat and portfolio review sessions, an improved and strengthened IT workforce, and a Government-wide strategy for shared services and mobile technology -- a historical first for the Federal Government. These changes will improve government productivity and lower barriers to citizen and business interaction with the government, all while we bolster cyber security.

To find out more about the FY 2013 IT Budget, please click here.