Why Congress Must Extend the Payroll Tax Cut Through 2012

February 14, 2012 at 6:00 AM ET by Dan Pfeiffer
Twitter Facebook Email
Summary:
President Obama invited some hardworking, middle class Americans to the White House today to explain what $40 per paycheck means to their family's economic security

Today, President Obama has invited a group of Americans who made their voices heard the last time Congress threatened to raise their taxes to the White House.

At the end of this month, if Congress doesn’t act, taxes are set to go up on 160 million hardworking Americans, and the President believes that lawmakers must prevent this middle class tax hike without drama or delay.

For a family making about $50,000 a year, the payroll tax cut amounts to about $1,000 a year, or about $40 in every paycheck. In December, we asked America to tell us what losing $40 per paycheck would mean for their family, and the answers came from across the country — from students trying to stretch the budget a little bit further. From moms who need to buy their children lunch every day in the school cafeteria. And from commuters who are filling up the tank and looking at rising gas prices. Using twitter, email and Facebook, they told us clearly that $40 can make all the difference in the world.

Ultimately, thanks to these stories, Congress did the right thing and passed a two-month extension of the tax cut and unemployment insurance – but only after a drawn-out debate that put the strength of our economy and the security of middle class families at risk. Now that extension is about to expire.

The President is also inviting all Americans who oppose raising their taxes to share their own stories with the White House – you can submit them on WhiteHouse.gov, using the Twitter hashtag #40dollars or post them on our Google+ page or Facebook wall. You can watch the President’s remarks with these hardworking American families at 10:40 am ET on WhiteHouse.gov/live. 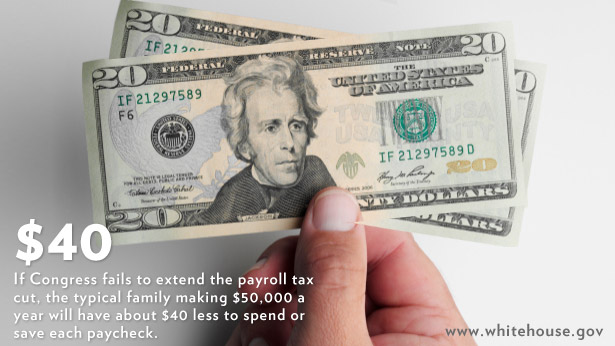