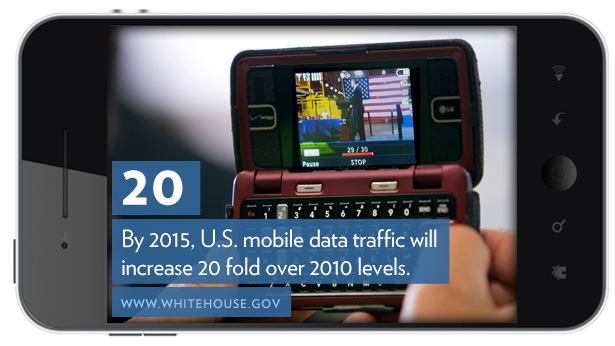 A new report from the Council of Economic Advisors found that by 2015, U.S. mobile data traffic will be 20 times higher than it was in 2010.

To provide for this projected traffic growth, much of it due to the increase in usage of smartphones, tablets, and other internet-enabled mobile devices, the Obama Administration has proposed making an additional 500 MHz of public airwaves, known as spectrum, available for wireless broadband access.

Making wireless broadband more widely available has the potential to transform many parts of the American economy, opening the door to everything from products that make businesses more productive and tools that help doctors and nurses provide better health care at lower costs to making it easier for people to interact with media-rich mobile apps and high-definition streaming video.

In addition, wireless broadband plays a vital role in enabling emergency personnel to communicate efficiently and to obtain necessary information quickly, including real-time videos, images, and other data, even when first responders are working across jurisdictional lines.

Today, Vice President Biden announced a new nationwide public safety broadband network that President Obama will soon sign into law as part of the payroll tax extension. The new legislation will create a nationwide inter-operable public safety broadband network that will, for the first time, allow law enforcement, firefighters and EMTs to have a dedicated communications network so they can talk with one another.

Read more about the benefits of a robust wireless broadband system in the CEA report.