We Can’t Wait: Obama Administration Calls for A Consumer Privacy Bill of Rights for the Digital Age

February 23, 2012 at 4:00 PM ET by Danny Weitzner
Twitter Facebook Email
Summary:
The Administration’s plan will also help provide American companies a global, open Internet environment for export of digital goods and services abroad by laying the groundwork for increasing interoperability between the our Nation’s data privacy framework and those of our trading partners.

Today at the White House, the Obama Administration unveiled a blueprint for a Consumer Privacy Bill of Rights to protect consumers online. As the President wrote in his cover letter to the report:

“Never has privacy been more important than today, in the age of the Internet, the World Wide Web and smart phones.  In just the last decade, the Internet has enabled a renewal of direct political engagement by citizens around the globe and an explosion of commerce and innovation creating jobs of the future. Much of this innovation is enabled by novel uses of personal information. So, it is incumbent on us to do what we have done throughout history: apply our timeless privacy values to the new technologies and circumstances of our times.”

In a related announcement, leading Internet companies and online advertising networks in the Digital Advertising Alliance came to the White House to commit to using Do Not Track technology now available in most major web browsers to make it easier for users to control online tracking.

The White House has proposed a Consumer Privacy Bill of Rights as part of a strategy to improve consumers’ privacy protections and to ensure that the Internet remains an engine for innovation and economic growth.  These rights give consumers clear guidance on what they should expect from those who handle their personal information, and set expectations for companies that use personal data. With the Internet as a leading engine for economic growth, the Administration is committed to building consumer trust in a rapidly changing digital environment.

In addition to proposing a Consumer Privacy Bill of Rights, the report calls for a stakeholder-driven process to specify how these rights apply in particular contexts;  strong enforcement by the Federal Trade Commission (FTC);  and greater interoperability between the United States’ privacy framework and those of our international partners. In the coming weeks, the Commerce Department’s National Telecommunications & Information Administration will begin convening companies, privacy advocates and other stakeholders to establish specific practices or codes of conduct that implement the general principles in the Consumer Privacy Bill of Rights.

The Administration’s plan will also help provide American companies a global, open Internet environment for export of digital goods and services abroad by laying the groundwork for increasing interoperability between the our Nation’s data privacy framework and those of our trading partners. This approach will provide consistent protections for consumers, reduce compliance costs for companies, and ensure the flexibility that is critical to innovation in the commercial world.

The Administration has also called on Congress to pass legislation based on the Consumer Privacy Bill of Rights model to extend baseline privacy protections to commercial sectors that existing federal privacy laws do not cover.  New legislation should help enumerate clearer rules for privacy protection on the Internet and give the Federal Trade Commission (FTC) and State Attorneys General additional tools to protect consumers online.

Members of the Digital Advertising Alliance representing nearly ninety percent of online advertising marketplace -- including Google, Yahoo!, Microsoft, and AOL-- have agreed to comply when consumers choose to opt out of tracking.  This commitment will be legally-binding and can be enforced by the FTC.  The advertising industry also committed not to release consumers’ browsing data to companies who might use it for purposes other than advertising, such as employers making hiring decisions or insurers determining coverage. The Administration is encouraged by these commitments and considers them to be an example of the value of industry leadership as a critical part of privacy protection going forward.

Today’s report, which was signed by President Obama, was developed under the leadership of the National Economic Council and the Office of Science & Technology Policy.  It builds on a preliminary report released in December 2010 by the Commerce Department’s Internet Policy Task Force. 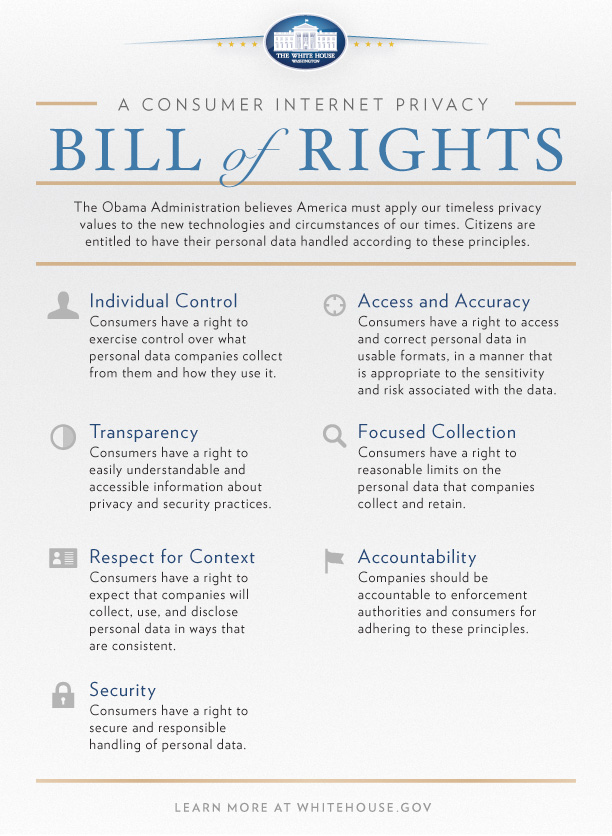