Creating A Better Life for All

February 28, 2012 at 8:03 PM ET by Julie Chavez Rodriguez
Twitter Facebook Email
Summary:
Julie Chavez Rodriguez, Associate Director of Latino Affairs and Immigration for the Office of Public Engagement, discusses her experience at the Department of Labor movie screening of 'A Better Life'.

Last week I had the honor of watching one of the best films I have seen in years. Thanks to the leadership of Secretary Hilda Solis, the Department of Labor (DOL) hosted a screening of A Better Life for students and Administration employees. The film follows Carlos Galindo, a father with the strength and determination to ensure a better life for his son Luis, while living in the shadows of Los Angeles, a place I called home for 9 years. 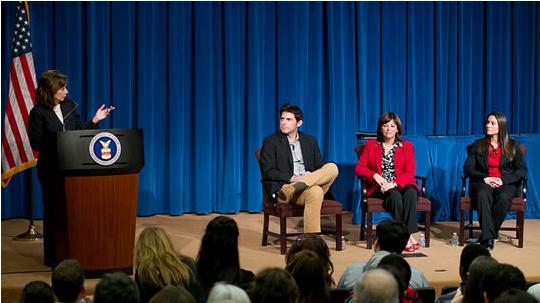 In front of an audience of nearly 300 stakeholders and guests, Secretary of Labor Hilda L. Solis introduces and holds a discussion with film director Chris Weitz, Diane Cortez, OSHA Investigator; and Lucia Garcia, Wage & Hour Investigator before screening the 'A Better Life' on the evening of Thursday, February 16, 2012. (Photo Credit: Department of Labor)

We know that there are real economic benefits to Comprehensive Immigration Reform. For example, according to the non-partisan Congressional Budget Office, the DREAM Act –as approved in the House in December 2010 –would have reduced the deficit by $2.2 billion over the next 10 years. Further, Comprehensive Immigration Reform would boost GDP by more than 1 percentage point. The President has been clear that this is an economic imperative and an Administration priority. And A Better Life is a reminder to all that the time has come for us to get this done, for our country and our economy.

In addition to the film screening, Secretary Solis moderated a panel  that included Director Chris Weitz who talked about the impact this film has had on his career,  and two amazing DOL employees who are working tirelessly to ensure that workers are treated with the dignity and respect that  our country’s Labor Laws are meant to ensure.

As a nation of laws and a nation of immigrants, we know that the two can create a 21st century immigration system that ensures A Better Life for all.

To view a slideshow of the panel click here.

Julie Chavez Rodriguez is the Associate Director of Latino Affairs and Immigration for the Office of Public Engagement.