February 28, 2012 at 11:37 AM ET by Tom Kalil
Twitter Facebook Email
Summary:
Georgia Tech’s Invention Studio is a great example of what universities, companies and students can do to make engineering more approachable, exciting and personally rewarding – and I hope that more campuses and companies can join forces to invest in programs like Invention Studio. As President Obama said at this year’s White House Science Fair, and reiterated yesterday: “Don’t be bored, make something.” 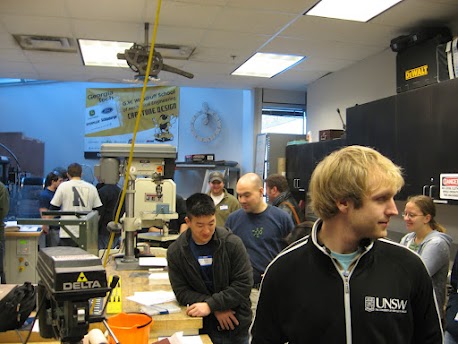 Recently, I interviewed Eric Weinhoffer and Chris Quintero, two undergraduate students who are leaders in Georgia Tech’s Invention Studio.  The studio is a 1,000 square foot space that has free-to-use cutting-edge prototyping equipment such as 3D printers, laser and water jet cutters, injection molding machines, and computer-controlled mills and lathes.  The heart and soul of the studio are its 50 volunteer undergraduate engineering students who are members of the Georgia Tech Makers Club.  They staff the lab, train “newbies,” maintain the equipment, buy new equipment, and offer courses in welding and rocketry.  Companies such as Coca-Cola, Ford, John Deere, Autodesk, and Caterpillar help fund the studio because of their interest in hiring students who can design and build just about anything.  The studio is a great example of what universities, companies, and students can do to make engineering more approachable, exciting, and personally rewarding – and I hope that more campuses and companies can join forces to invest in programs like Invention Studio.  As President Obama said at this year’s White House Science Fair, and reiterated yesterday: “Don’t be bored, make something.”

Q.  What are students at Georgia Tech using the studio for?

More than 500 students, staff, and faculty use the facility every semester for research and for class projects associated with more than a dozen Georgia Tech engineering courses. Students also use it for personal “do it yourself” projects and even to design prototypes for their startups.  The studio has become a hotbed of multidisciplinary collaboration, since students pursuing different majors are meeting and helping each other out.

One team of mechanical and bioengineering students used the studio to develop AutoRhexis, surgical equipment that is designed to make cataract surgery safer and more cost-effective.  Another student team developed Velociryder, a motorized, self-balancing skateboard.

Absolutely.  Students are initially attracted to engineering because they enjoy designing and creating things.  The invention studio creates a community of university students, K-12 students, industry sponsors and academic faculty that celebrates creativity, imagination, and playfulness.  This helps current students retain their passion for engineering as they struggle in rigorous traditional courses. They subsequently get better engineering jobs when they graduate, since they’ve demonstrated real-world design/build skills. The Invention Studio has become a focal point for the Georgia Tech campus tours, and draws at least a dozen prospective students to the space on a weekly basis.

Students associated with the studio are also raising the visibility of engineering in the region. Last year the studio hosted the Atlanta Mini Maker Faire, which saw over 2000 Makers from the Southeast on Georgia Tech’s campus celebrating engineering and invention.  Events like these showcase how rapidly the “DIY Mindset” and Maker Movement are sweeping the nation. The Faire hosted 50 exhibitors, who shared their projects and skills, inspiring attendees to make something of their own.

Q.  What advice would you have for engineering programs at other campuses about creating an Invention Studio?

Start small - find a core group of students who are passionate about hands-on learning and give them the ability to lead.  With a modest investment in tools, students will begin learning and making, inspiring others to join them. Before long, the space will be packed with intrigued students and staff. At a certain point, the space will “sell itself,” attracting interest and support on and off the campus.  Undergraduates have the ability to lead, to promote a culture of safety, and be financially responsible for expensive tools.   In our experience, it is this personal ownership of the space which keeps students volunteering in the studio long after their three hour per week commitment which we require.

Having a faculty champion is also critical. At Georgia Tech, we’re fortunate to have Professor Craig Forest, who teaches the Capstone Design course and who has helped with fundraising, acquiring the space, purchasing the equipment, and advising the Makers Club.

Q.  What role do you think that engineering students could play in giving more middle and high school students the opportunity to become a Maker?

Most middle and high school students don’t know what engineering is.  If they do, they are often intimidated by the math and science.  The Maker Movement can expose students to engineering through public events like the Maker Faires, or Georgia Tech’s InVenture Prize, an invention competition for undergraduates which is televised live.  We have also have served as mentors for a high-school FIRST Robotics team and hosted a 3D printing workshop for a local troop of Boy Scouts.