February 29, 2012 at 8:33 PM ET by Colleen Curtis
Twitter Facebook Email
Summary:
Before a formal dinner in the East Room, the President welcomed the veterans home, praised their bravery and dedication to their mission, and thanked them on behalf of more than 300 million Americans in whose name they served 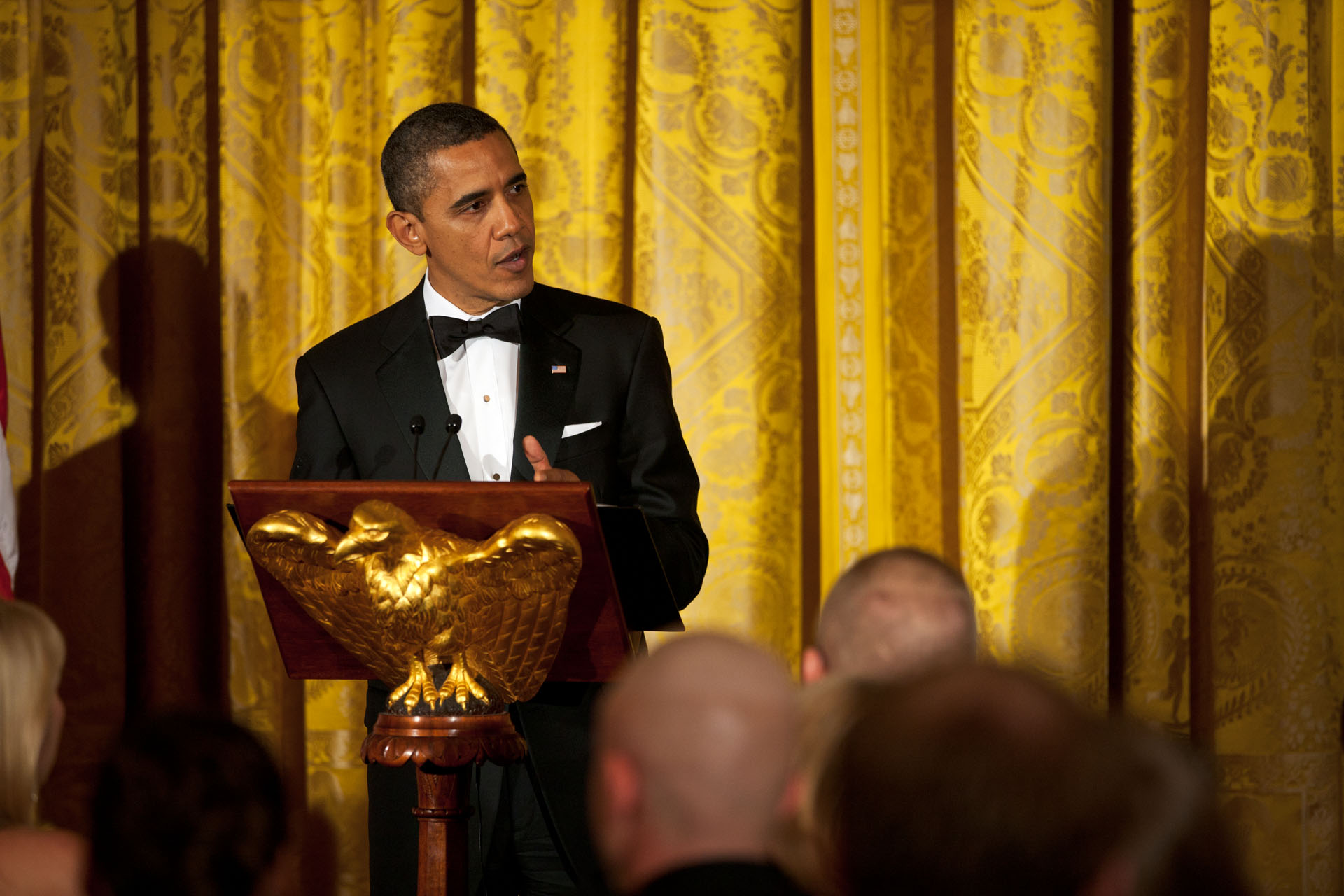 President Barack Obama delivers remarks at a Department of Defense dinner in the East Room of the White House, Feb. 29, 2012. The President and Mrs. Obama hosted the dinner to honor Armed Forces who served in Operation Iraqi Freedom and Operation New Dawn, and to honor their families. (Official White House Photo by Lawrence Jackson)

President Obama, First Lady Michelle Obama, Vice President Joe Biden and Dr Jill Biden tonight welcomed a group of true American heroes to the White House. “A Nation’s Gratitude: Honoring those who served in Operation Iraqi Freedom and Operation New Dawn” was a formal dinner that paid tribute to our Iraq veterans and marked the end of the war.

More than 100 service members and their guests were in attendance, and the invitees included men and women in uniform from all ranks, each U.S. state and territory, and every branch of the Armed Forces. Together, they represented the million American troops who served in Iraq, and they also represented  what Vice President Joe Biden called the finest generation of warriors in all of history.

In his remarks, the President welcomed the veterans home, praised their bravery and dedication to their mission, and thanked them on behalf of more than 300 million Americans:

Tonight, what we can do is convey what you’ve meant to the rest of us. Because through the dust and the din and the fog of war, the glory of your service always shone through. In your noble example, we see the virtues and the values that sustain America, that keep this country great.

You taught us about duty. Blessed to live in the land of the free, you could have opted for an easier path. But you know that freedom is not free. And so you volunteered and you stepped forward, and you raised your hand and you took an oath -- to protect and defend; to serve a cause greater than yourself, knowing, in a time of war, you could be sent into harm’s way.

You taught us about resolve. Invasion turned to insurgency and then sectarian strife. But you persevered, tour after tour, year after year.  Indeed, we’re mindful that even as we gather here, Iraq veterans continue to risk their lives in Afghanistan, and our prayers are with them all tonight.

In one of our nation’s longest wars, you wrote one of the most extraordinary chapters in American military history. Now the Iraqi people have a chance to forge their own destiny, and every one of you who served there can take pride in knowing you gave the Iraqis this opportunity; that you succeeded in your mission.

You can watch the tributes before the dinner here:

As the last American troops left the country, we put together a timeline to show what it took to end combat operations and begin fulfilling the promise we as a nation owe to those who served. You can explore it here