Our Dependence on Foreign Oil Is Declining

March 1, 2012 at 9:30 AM ET by Megan Slack
Twitter Facebook Email
Summary:
America's dependence on foreign oil is declining, but we have to do more to bring down the price of gas, and there's no short-term solution. We must continue pursuing an all-out, all-of-the-above strategy that develops every available source of American energy

America’s dependence on foreign oil has gone down every single year since President Obama took office. In 2010, we imported less than 50 percent of the oil our nation consumed—the first time that’s happened in 13 years—and the trend continued in 2011. 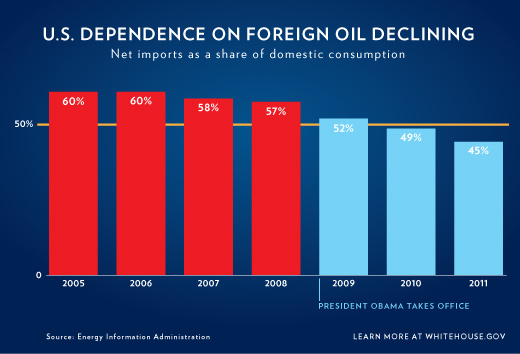 We’re relying less on imported oil for a number of reasons, not least that production is up here in the United States. In fact, America is producing more oil today than at any time in the last eight years. As part of his strategy to increase safe, responsible oil production in the United States, President Obama has opened millions of new acres for oil and gas exploration and we now have more working oil and gas rigs than the rest of the world—combined.

Despite all this, Americans are still paying more at the pump when we fill up. That's because drilling for more oil here at home won’t affect the price of gas on its own. Oil is bought and sold on a world market. In the short term, it’s subject to price spikes when there’s instability or uncertainty along the global supply chain. And growing demand in countries like India, Brazil, and China, which tripled the number of cars on the road in the last five years, will drive prices even higher over the long term.

So we have to do more than drill now to bring down prices for the future. Relying on the fossil fuels of the last century won’t be enough, especially as demand keeps increasing. We need an all-out, all-of-the-above strategy that develops every available source of American energy. This includes everything from tapping our offshore oil supplies and vast natural gas reserves, to doubling down on clean energy resources like wind and solar power, and developing new technologies that help us use less energy altogether.

This is the strategy President Obama has been pursuing since he took office, but there’s still more to be done. We need to put in place the right incentives to encourage a clean energy future, and repeal the $4 billion in annual taxpayer subsidies paid to oil and gas companies. Today in New Hampshire, the President will reiterate his call on Congress to do just that.

Want to learn more about President Obama's Blueprint for American-made energy? Here's everything you need to know.