As First Lady Michelle Obama and Dr. Jill Biden launched Joining Forces last April, the U.S. Chamber of Commerce’s “Hiring Our Heroes” program committed to host 100 hiring fairs across the country with the top notch companies they work with on a daily basis.

Earlier today in Philadelphia, Pennsylvania, the Chamber met that commitment. In just 11 months, the Chamber has hosted 100 of these fairs in 45 states and the District of Columbia and more than 8,000 veterans and military spouses have already landed jobs -- and the best is yet to come.

Starting this month, the Chamber will host 400 hiring fairs in the next year throughout the U.S. They will work with their Employment Advisory Council – which is made up of more than 20 of America’s largest companies and represents 25 million jobs – to find solid jobs for even more veterans and military spouses . The Chamber will also make improvements to their fairs by layering in in classes on resume writing, financial literacy, interview prep, mentorig opportunities, advice on dressing for success, and much more.

The Chamber has a new focused effort on hiring military spouses too. Last January, they launched a stand-alone program for military spouses and formed the Military Spouse Business Alliance with nine leading military family non-profits. The first-of-its-kind program will include 20 hiring fairs at military installations in the coming year that will include resumé and interview workshops, small-group mentoring with senior women executives and military spouses, an entrepreneurs’ pavilion, and image workshops.

“Hiring Our Heroes” will also launch a campaign focused on small business engagement later this month. Driven largely by the Chamber’s ability to reach 3 million of its own small business members, the Chamber will get thousands of small businesses across America to commit to veteran and military spouse hiring.

Through their strong partnerships with Joining Forces, the public sector, non-profits, and veteran services organizations, the Chamber will spread this movement to help veterans and military spouses find meaningful careers across America. 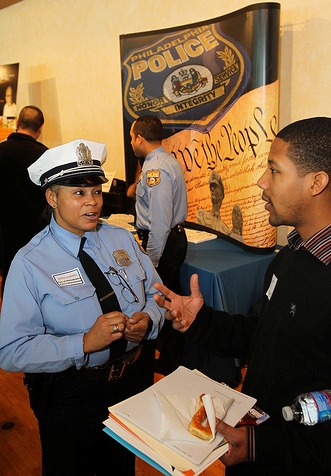