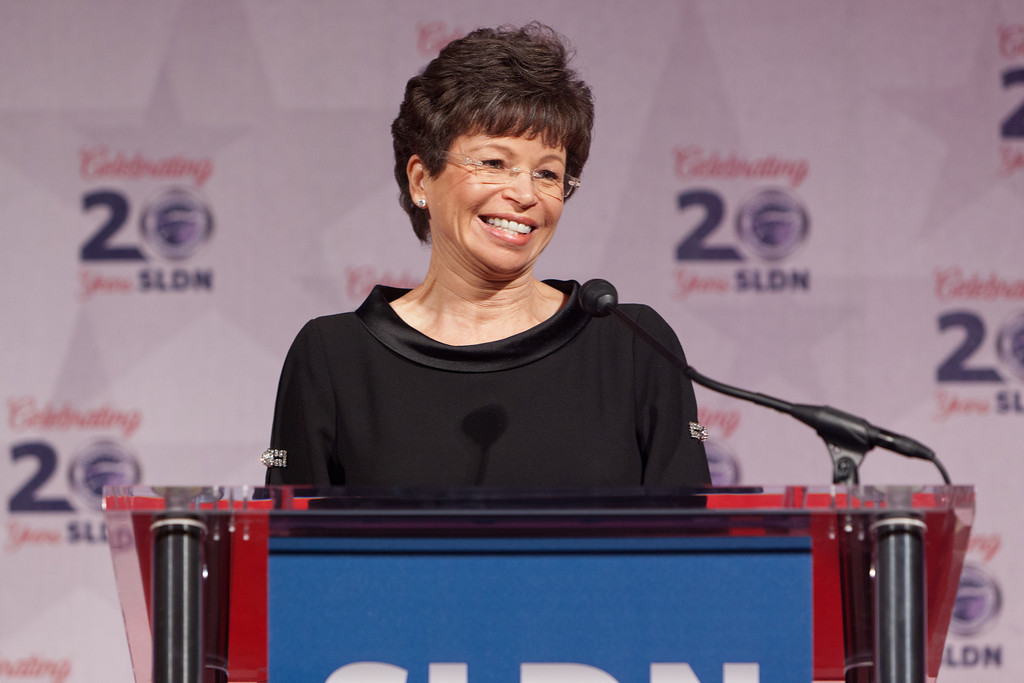 Here are her prepared remarks:

You know, Aubrey, after an introduction like that I think the smart thing for me to do would just be to say thank you and sit right back down. I deeply appreciate your kind words. Thank you for your many years of leadership at SLDN, and for your friendship. I know I speak on behalf of everyone here when I say how much you will be missed when you step down.

Last Wednesday, President Obama and the First Lady hosted an extraordinary event at the White House—a dinner in honor of the veterans of the War in Iraq. During his toast, the President said, “You taught us about sacrifice—a love of country so deep, so profound, you were willing to give your lives for it.”

On the President’s behalf, thank you to all of the servicemembers and veterans who are here tonight. You’ve put your lives on the line in order to keep us safe. We will never forget what you’ve done for America, and President Obama is committed to making sure that we serve you as well as you have served us.

I also want to recognize all of the military families who sacrifice so much, and who also deserve our appreciation and recognition. Let’s give them a big round of applause.

In fact, I’d like to begin by telling a story about one of the SLDN Staff, David Hall. In 1996, David joined the Air Force, just like his father and step-father before him. At Langley Air Force Base, he was one of the top airmen in his flight, and as a weapons loader, he won the Airman of the Quarter award. David served overseas in Saudi Arabia and Kuwait, was a distinguished graduate of Airman Leadership School, and was accepted to the Air Force ROTC. In March 2002, he received a slot to train to be a pilot – only about 500 cadets nationwide receive this honor each year.

David was a rising star in our nation’s military, and like all brave men and women who wear the uniform, David made enormous sacrifices for the sake of our country. However, David was forced to live a lie, and always look over his shoulder, because of who he loved.

Then, his promising career was upended, and he was discharged, just for being gay. At the time, he was the highest ranking Air Force ROTC junior in his detachment.

I’m telling David’s story tonight not just because he is a remarkable person – and not just to make him blush. I’m telling his story because it is the story of so many of you, and so many patriotic servicemembers who were forced to live the same kind of lie that David lived, and were discharged, despite serving our country with honor and distinction. That was wrong, and it did not reflect our country’s highest ideals.

Of course, fortunately, David’s story did not end with his discharge. Even when he was barred from serving our country, he never stopped fighting to make it better. Today, he works full time at SLDN, as the Development Director and Information Technology Director.

Tonight, on behalf of President Obama, I want to thank and celebrate all of you who never stopped fighting for the repeal of Don’t Ask Don’t Tell.

Perhaps the most remarkable thing about what we have achieved together is that after just a few months, it already appears so unremarkable.

I’m sure that all of you have seen some of the recent pictures of gay and lesbian servicemembers sharing an embrace, or first kiss with a loved one, when they return home from duty—just like any other family. It’s a reminder that the men and women of our armed forces have handled repeal with the professionalism and class that we have come to expect from the finest fighting force in the world.

The post-DADT era already has been almost universally accepted, which is at it should be. But we must never forget the monumental nature of this achievement, or the way that we reached it.

Isn’t it amazing that when we went to bed on September 19th of last year, our country said that if you were gay or lesbian, you had to live a lie in order to wear the uniform, and when woke up on the 20th, our country was a different and far better place?

But you know better than anyone that change didn’t really occur overnight. The end of Don’t Ask, Don’t Tell was 20 long years in the making. And some of you have been a part of the journey since day one.

So thank you for your steadfast determination, persistence, and conviction that we could right a wrong. There were moments when it seemed foolish to hope. The times when Don’t Ask, Don’t Tell seemed more firmly entrenched than ever. Through it all, you never wavered from the ultimate goal. You believed that one day, if you worked for it, and fought for it, and sacrificed for it, then change would come.

That is part of the story of America – just as every nation does, we make mistakes. What makes our country so special is that here, ordinary men and women can come together to put us back on the right path – to continue our journey toward a more perfect union.

Your stories inspired and motivated President Obama. Because of you, he didn’t have to start from square one. He was able to build upon the hard work you had already done.

From the day he took office, the President was unwavering in his commitment to repeal DADT. In a speech shortly after taking office, he made it clear that, “We should not be punishing patriotic Americans who have stepped forward to serve their country.” In his first State of the Union, in 2010, the President said, “This year, I will work with Congress and our military to finally repeal the law that denies gay Americans the right to serve the country they love because of who they are.  It's the right thing to do.” And throughout that time, the President’s team worked tirelessly with groups such as SLDN, with our military, with members of Congress – building a coalition that could get the job done. Because repealing DADT was not just about changing the law, but about creating an atmosphere of tolerance for one another.

But change is hard. Change takes time. There were moments when some people, perhaps even many of you, believed that President Obama would never be able to repeal this law. And in those moments, when the President could have quit, he remained steadfast. He had faith in the men and women of our military, and he never stopped believing that, as Dr. King put it, “The arc of the moral universe is long, but it bends towards justice.”

I remember the day in February 2010, when Secretary Gates and Admiral Mullen testified before the Senate Armed Services Committee. I will never forget Admiral Mullen’s words, “For me personally it comes down to integrity – theirs as individuals and ours as an institution.” I get goosebumps just thinking about that historic moment.

And as proud as I am of what we’ve done, I am just as proud of the way we’ve done it. The president’s approach took time: Time to engage with and educate every stakeholder; to get buy-in from the military leadership, from service members, and Members of Congress. I recognize that there were many frustrations that came along with our process. But I believe that it was the right choice.

And as a consequence, the transition has been smooth. Our national security has not been threatened by the repeal.  On the contrary, it’s been strengthened because gay and lesbian members of our military are now recognized as full members of the team. And despite what some opponents of repeal might have predicted, we have heard very few stories about resistance from within the military. Our military men and women are focused on their jobs, their missions.  We got repeal done, we got it done the right way, and our country is stronger and better because we did.

And that brings me to a day I will never forget, that Saturday two years ago when I sat in the Senate gallery and watched as Democrats, and some Republicans, joined together to vote for repeal. It is the only vote that I have gone to the Hill to watch in person.

Because so many of you continue to go above and beyond as you serve our country. Pepe Johnson is in the audience tonight – he is one of several gay and lesbian servicemembers who have already returned to the military, so that he can continue to protect America.

Where’s Stacey Vasquez? Stacey was discharged under DADT in 2003. Since then, she has gone back to school, and today, she works at the VA, helping make sure we do right by our veterans.

And where’s Tony Woods? Tony is a veteran of Operation Iraqi Freedom. In 2008, he came out in order to protest DADT, and was discharged. Since then, he made a bid to be the first openly gay African American in Congress, and today, I’m proud to say he is a White House Fellow, working in the Office of Personnel Management.

What Pepe knows, what Stacey knows, what Tony knows, what all of you know, is that our work is never done. That’s why you continue to inspire President Obama with your stories, your sense of duty, and your commitment to our country. It’s patriots like you who give him confidence that we will continue the momentum.

You know, in the Obama Administration, we talk a lot about change. Well thanks to the work we’ve done together, if anyone ever asks you what change is all about, you can tell them that change is finally being able to put a family photo on your desk. Change is being able to tell your coworkers what you and your loved one did over the weekend, or what you have planned for your family vacation. Change is being able to share stories about your family with fellow servicemembers while you’re away from home, and living with the fear that you may never see them again. Change is knowing that if you make that ultimate sacrifice for your country, someone will be able to notify your loved ones. That’s change.

And it’s why change is worth fighting for, even when it’s hard.  So let’s not rest. Instead, let’s keep fighting. Because we have work to do: We must continue to keep our country safe. We must keep striving for true and lasting equality. And we must protect our progress from those who would turn back the clock.

None of this will be easy – but I know that all of you are accustomed to doing hard things. You know how to change this country and improve people’s lives. So let’s keep at it: let’s stay together, let’s stay focused, and let’s continue to bend that arc towards justice.