March 8, 2012 at 12:59 PM ET by Hallie Schneir
Twitter Facebook Email
Summary:
On International Women's Day, the First Lady honors 10 Women of Courage who have committed themselves to fighting for the world as they know it should be. 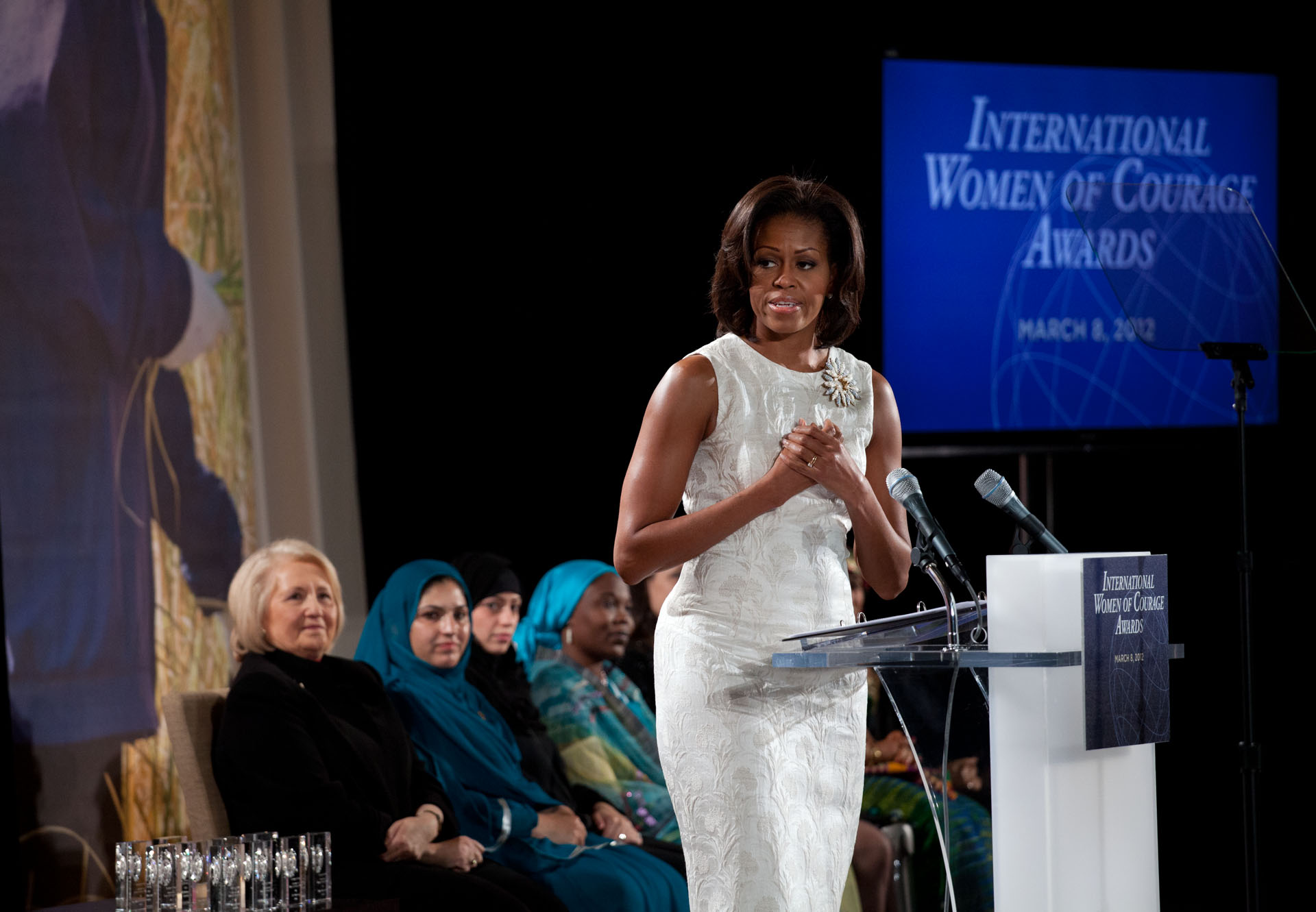 Earlier today, First Lady Michelle Obama spoke at the International Women of Courage Awards at the Department of State. Please see below for her remarks, and don’t forget to check out President Obama’s 2012 Proclamation on Women’s History Month.

Thank you. Thank you so much. Good morning, everyone. To say it is a pleasure to be here with all of you today would be an understatement.  This is truly an important opportunity, it is an uplifting opportunity, and I am happy to be a part of it every single year.

And I have to start by thanking Secretary Clinton not just for that very kind introduction, but she has been an outstanding -- should I say that again? -- an outstanding Secretary of State. And she has been an inspiration to women and girls around the world. She is a role model for me in so many ways.  I don't think she realizes how what she has done has made what I am doing partially possible. So with all the respect and admiration that I can give to her, I will be wherever she needs me to be, whenever she needs me to be there.

I also want to join in recognizing our special guest, First Lady Mills, who is a dear friend. We enjoyed our visit to Ghana. And she is going to have a productive stay here in Washington, so she's going to be busy. Just take it easy.  And of course, Secretary Vanda Pignato, who is a dear friend as well.  We are honored to have you with us as well.  I also want to thank them for taking the time to be here today.  It means so much to us all for you to be here.

I have to thank Ambassador Melanne Verveer for her terrific work she is doing -- what she is doing for  -- for Global Women’s Issues. This event is top-notch, and it wouldn't happen if not for her. We are so grateful.

And of course, I want to recognize most of all the ten Women of Courage that we're honoring here today. These women come from all different corners of the globe. They have taken very different journeys to this moment. But they are all here today because somewhere along the line, they decided they could no longer accept the world as it is. And they committed themselves to fighting for the world as they know it should be. They saw corruption, and they worked to expose it. They saw oppression, and they worked to end it. They saw violence, poverty, discrimination, and inequality -- and they decided to use their voices, and risk their lives, to do something about it.

And day after day, these women have stood up and said the things that no one else could say, or would say.  Year after year, they endured hardships that few of us could bear.

At the age of 22, Zin Mar Aungwas imprisoned for 11 years simply for writing a letter demanding that the elected civilian government take power in Burma.  When she was freed, she went right back to work, fighting for the rights of women and ethnic minorities and political prisoners.

Shad Begum founded a women’s NGO in Pakistan, and she ran for district council. When she won, she intended to use her position to improve health care and education.  But when the council met, she was forced to sit in a separate side room, behind a locked door. The microphone that was supposed to allow her to participate never worked.  But undeterred, she decided to run for an even higher elected office, saying -- and this is her quote -- “Whatever it takes, I will make them hear me.”

And then there is Jineth Bedoya Lima, an investigative journalist in Colombia.  Back in 2000, when she was writing about an arms struggling [sic] network, she was kidnapped, brutally assaulted for hours by those who wished to silence her. But instead of backing down, she moved from her regional newspaper to a national one, and despite continued threats against her life, she kept reporting. She became a spokeswoman for a global campaign against sexual violence.  And for 12 years, she’s fought to hold her attackers responsible for their crimes.

She has even taken her case all the way to the Inter-American Commission on Human Rights, seeking justice not just for herself, but for women across her country.

And that is why, despite the risks they face, despite the hardships they endure, these women carry on -- because they know that they are fighting not just for their own rights and freedoms, but for the rights and freedoms of so many others. That is why, despite daunting physical obstacles, Safak Pavey didn’t just win a seat in parliament in her own country; she traveled to countries across the globe, winning support for the U.N. Convention on the Rights of Persons with Disabilities. She lives her life by a simple motto -- these are her words: “Whatever you experience is an example to others.”  Whatever you experience is an example to others.

The same can be said of Pricilla de Oliveira Azevedo. Despite being one of just a few women in the Rio de Janeiro military police, she has risen through the ranks, commanding more than 100 male officers. We love that. Working in one of the toughest communities in the city and even arresting a gang of criminals who kidnapped her.  Women of all ages have been inspired by her leadership, and of them she says -- again a quote -- “They see me as an example of the fact that any woman can work in any type of activity. It’s just a question of wanting to do it.”

And that is why each year we invite young people to join us at this event.  It is so important because we want them to learn from and be inspired by the example of these women of courage.

And I’m thinking particularly of Jineth Bedoya Lima and what she endured on that day 12 years ago. As her attackers assaulted her, they said to her, “Pay attention. We’re sending a message to the press in Colombia.” Well, today, with every story she writes and with every public appearance she makes, Jineth is sending her own message that she will not back down, that she will not give up, and she will never, ever allow her voice to be silenced.

And it is the same message that all of these women are sending with every act of courage they commit -– the message that injustice will not stand, that inequality will not be tolerated, and that they will not stay silenced in the face of evil.

And to all of those who are oppressed and abused and left out and left behind, they are saying:  I am standing with you. I am fighting for you. You are not alone.

And on this International Women’s Day, that is the very message I wish to send to these 10 women and others like them in every corner of the globe.

On behalf of my husband and our country, I want you to know that you are never, ever alone. The United States of America stands with you. And we are so incredibly proud of everything that you have achieved.  And we will continue to fight with you for the causes to which you have devoted your lives.

So thank you all so much.  Enjoy this day. Congratulations. God bless. Now, before I sit down, I have one important honor. I get to introduce two more women of courage who have received the highest honor for their work –- our 2011 Nobel Peace Prize laureates, Leymah Gbowee and Tawakkol Karman.  Please, let’s welcome them to the stage.

Deputy Director of the White House Council on Women and Girls